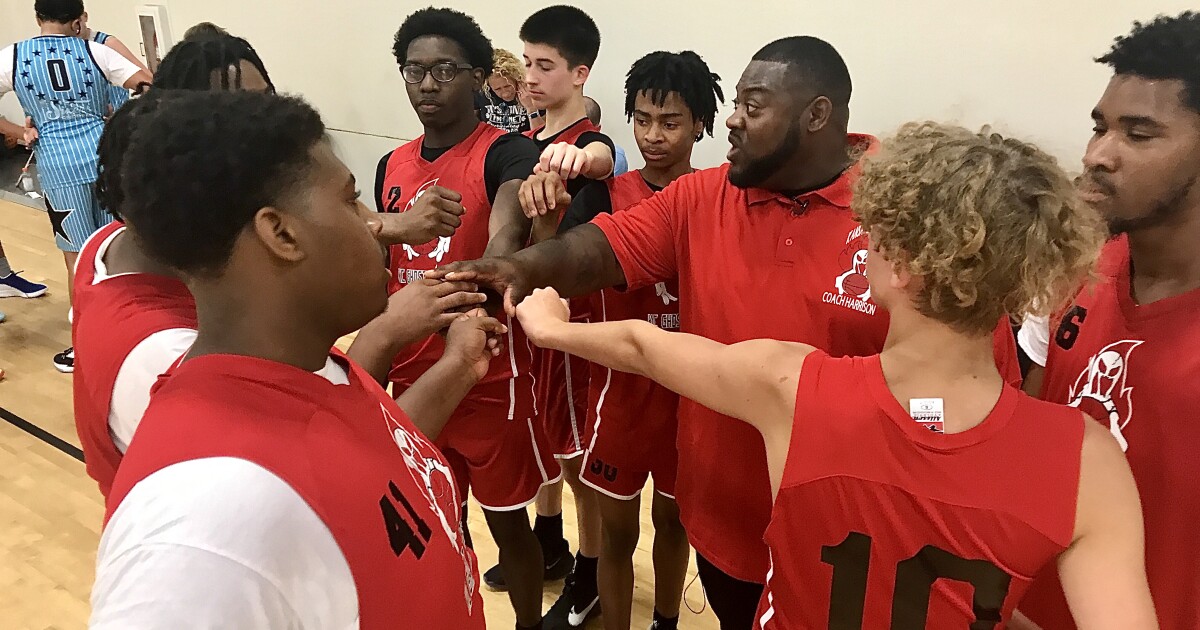 OVERLAND PARK, Kan. — Kelvin Harrison’s path to the sidelines of a basketball court as a youth coach in Kansas City, Missouri, began during his own childhood.

Harrison admits his mother couldn’t always afford to pay registration fees for him to play sports.

Years later as an adult, Harrison saw another child’s family struggle to afford registration, which reminded him of his own experience.

That prompted Harrison to launch his own basketball team, the KC Ghost Riders. Along with paying some registration fees, Harrison uses sponsors and money from his own pocket to make sure every child has an opportunity to play basketball.

“I was like, ‘I have to make a difference for my community,'” Harrison said.

For the past 11 years, Harrison has been coaching children in the southern part of the Kansas City area, but he will retire after this summer’s season.

“He’s an amazing coach,” Jerry Price, who plays for Harrison, said. “He teaches us a lot on how to stick together and everything.”

Harrison emphasizes that the lessons learned from basketball reach beyond the court.

During practices and games, he imparts lessons on trust, resilience, positivity and more.

He’s quick to brush off attention, saying lots of coaches and mentors emphasize similar messages all across town.

“As a coach and as people in the community, we have to come together,” he said. “That’s what it’s all about, because I can’t do it all by myself and they can’t do it by themselves. So, it all goes back to basketball; we’re all working as a team.”

Harrison said knowing some of his messages resonated with his players over the years is like winning $1 million.

During the pandemic, 41 Action News wants to spotlight people, organizations and companies helping the community. To share these stories, use #WeSeeYouKSHB on social media.

In a since-deleted tweet responding to a question about a potential contract extension for Kansas City Chiefs safety Tyrann Mathieu, Mathieu tweeted that he's "probably not" going to get a new deal in … END_OF_DOCUMENT_TOKEN_TO_BE_REPLACED

KANSAS CITY, Mo. — A manhole left uncovered is the source of concern after a woman damaged her car in Kansas City. The single-car crash happened at 11th Street and Tracy Avenue during the busy … END_OF_DOCUMENT_TOKEN_TO_BE_REPLACED

Kansas City, Missouri's COVID-19 emergency order was set to expire at the end of the month. But Mayor Quinton Lucas made it clear Friday that private businesses can still set their own rules.Any … END_OF_DOCUMENT_TOKEN_TO_BE_REPLACED

KANSAS CITY, MO (KCTV/AP) — All restrictions meant to slow the spread of the coronavirus were being rescinded as of midday Friday in Kansas City, Missouri, following guidance from the U.S. Centers for … END_OF_DOCUMENT_TOKEN_TO_BE_REPLACED