If you’ve been watching Chef’s Table on Netflix, pretending to enjoy some of the world’s most beautiful restaurants from the comfort of your couch, you can now order food from New York City’s Ivan Ramen in Dallas and Fort Worth. Restaurateur Ivan Orkin is selling bowls of tonkotsu and shoyu ramen for delivery and pickup near Uptown Dallas, Preston Hollow in Dallas, and in parts of Fort Worth.

The food is being sold from a ghost kitchen, meaning that Ivan Ramen has partnered with three existing D-FW restaurants. The noodles and broth are Orkin’s recipes, assembled at Blue Sushi Sake Grills in Dallas and Fort Worth.

Orkin and Nick Hogan, CEO of Blue Sushi’s parent company Flagship Restaurant Group, made a deal to sell Ivan Ramen’s food in kitchens in Kansas City, Denver, Cleveland, Austin, Dallas and more. Right now, Ivan Ramen is available at eight locations in Nebraska and Texas only; the others are coming soon.

“We’d been having discussions with Ivan for maybe the last five years,” Hogan says. “He’s gotten a lot of press and has a lot of notoriety on what is a really interesting story and a great product.”

Orkin joins many celebrity chefs who have entered the ghost kitchen game during the coronavirus pandemic. Food Network star Guy Fieri has five ghost kitchens in North Texas; Netflix chef David Chang has two. Even comedian George Lopez is planning to sell delivery tacos under his name in D-FW starting in June.

Hogan believed his restaurant group — which operates 23 brick and mortar stores — could help Ivan Ramen’s two-restaurant company scale up in size. And Orkin was receptive, especially since one of his ramen shops in New York City closed during the pandemic.

“Restaurants are hard,” Orkin says. “When you disappear, people forget about you.”

Starting up the ghost kitchens with Hogan “gave me hope,” Orkin says, “that I wasn’t just sitting in my bedroom feeling sorry for myself. I was actively growing my business.” 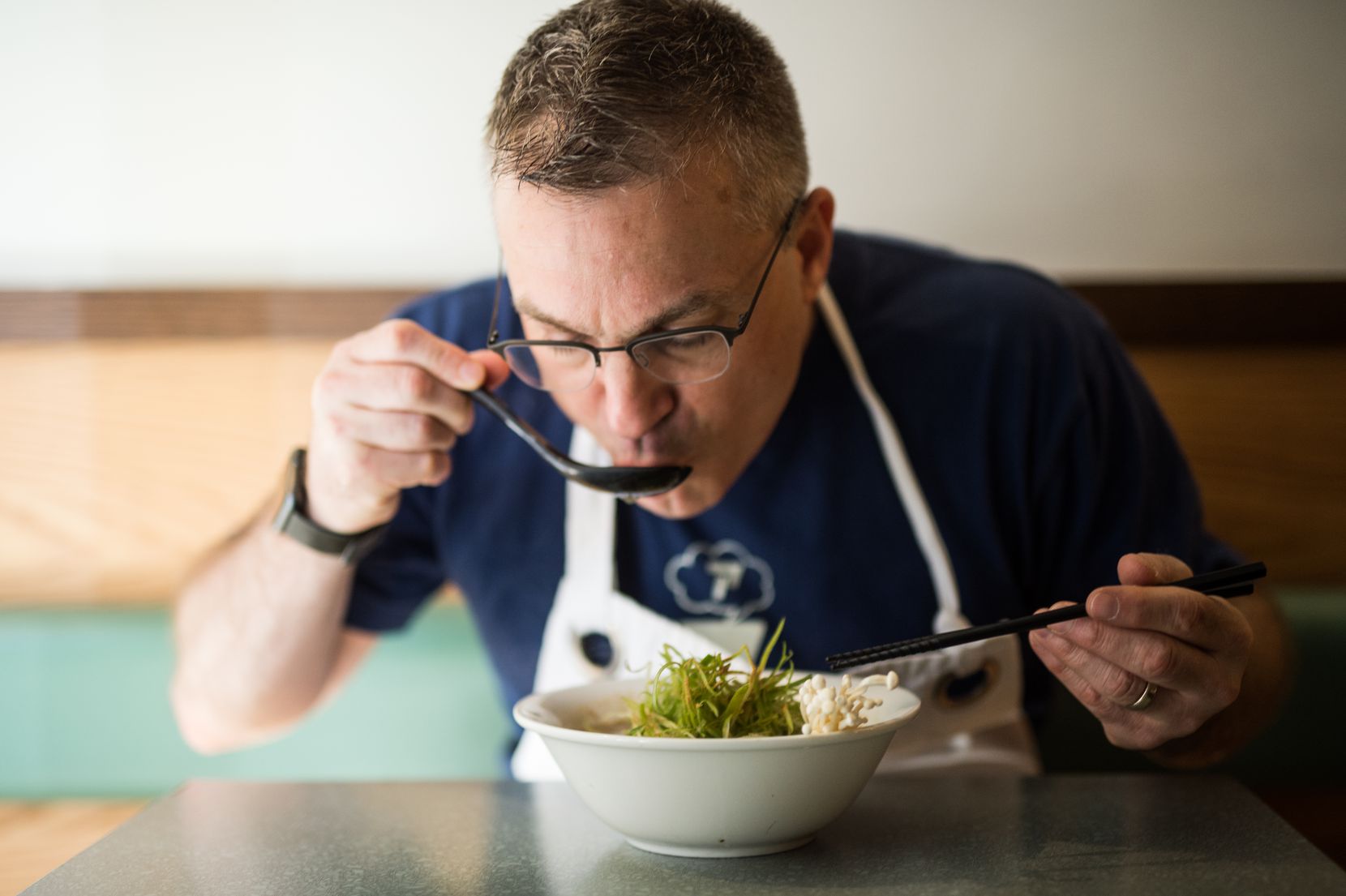 Chef Ivan Orkin opened his first ramen shop in Tokyo. “This move seemed destined for failure in a country where ramen enjoys a cult-like status,” says his restaurant’s website. But the concept worked, and customers lined up to eat his food. Orkin now lives in New York City and was featured on “Chef’s Table” on Netflix in 2017. He operates one Ivan Ramen shop; one closed mid-pandemic. (Daniel Krieger Photography)

On the Netflix show Chef’s Table, Orkin is a obsessive student of ramen who spent about 20 years living in Japan. He’s a big talker with a foul mouth: One of the first things he says on the Netflix special is, “I’m a sort of go [expletive] yourself kind of guy.”

For years, Hogan thought Ivan Ramen would fit with the Blue Sushi brand.

Customers who want a taste of Ivan Ramen can order online for delivery or pickup. The ghost kitchen is also selling steamed pork buns, spicy kyuri pickles, Japanese beer and five kinds of sake. All of Ivan Ramen’s ghost kitchens use ramen noodles made by Sun Noodles in New Jersey, the same company that supplies Orkin’s New York City shop.

Selling ramen noodles for pickup or delivery was once a controversial topic among chefs. The noodles could get damaged. 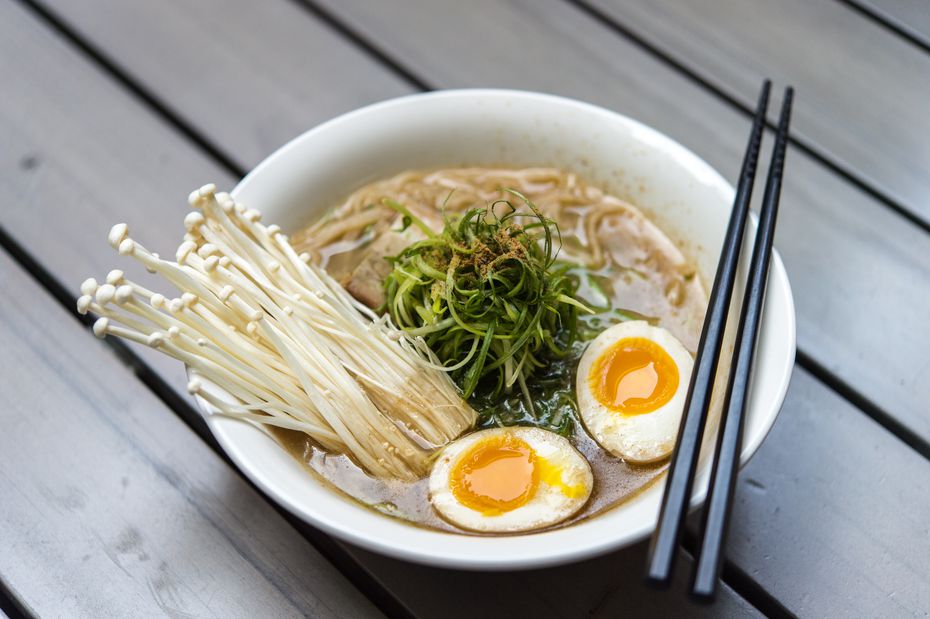 Most of the items on Ivan Ramen’s delivery and pickup ghost kitchen menu in Dallas and Fort Worth are bowls of ramen, like this one. Other options include steamed pork buns, spicy kyuri pickles, Japanese beer and sake. (Daniel Krieger Photography)

“I have to admit, I was very stubborn about delivery years ago, because noodles are so delicate and because it’s so hard to ensure that they taste the right way,” Orkin says. “But early on in New York, all my partners convinced me that New Yorkers really want delivery. And in turn, Americans love delivery food.”

Ivan Ramen’s noodles are cooked, then shocked in cold water. They’re tossed in a little bit of fat so they don’t clump up, then they’re packaged separately from the broth, Orkin says.

“It’s kind of remarkable how good it is,” he says.

His food first became available in Fort Worth on Feb. 17, then in Preston Hollow on March 10 and in Uptown Dallas on March 24. It’s Orkin’s first time doing a ghost kitchen.

And of the 30 restaurant owners featured on the episodes of Chef’s Table, Orkin is the only person selling food from kitchens in Dallas-Fort Worth.

“This gave me an opportunity to get my food to people all over the country,” Orkin says. It also forced him to solidify his distribution process, which includes shipping Japanese ingredients to all corners of the United States.

That “puts us in a great place to expand the ghost kitchen or open a brick and mortar,” Orkin says.

In fact, Orkin and Hogan are opening a full-service ramen shop in Arizona together. Will one in Texas come next, then?

“There is nothing inked,” Hogan says, “but we are actively looking for opportunities. … We’re kind of all in on Texas. And we’re all in on Ivan.”

Ivan Ramen is a ghost kitchen operating out of three Blue Sushi Sake Grills in Dallas-Fort Worth: at 7859 Walnut Hill Lane, Dallas; 3220 McKinney Ave., Dallas; and 3131 W. 7th St., Fort Worth. Find details on how to order Ivan Ramen in D-FW here.

In a since-deleted tweet responding to a question about a potential contract extension for Kansas City Chiefs safety Tyrann Mathieu, Mathieu tweeted that he's "probably not" going to get a new deal in … END_OF_DOCUMENT_TOKEN_TO_BE_REPLACED

KANSAS CITY, Mo. — A manhole left uncovered is the source of concern after a woman damaged her car in Kansas City. The single-car crash happened at 11th Street and Tracy Avenue during the busy … END_OF_DOCUMENT_TOKEN_TO_BE_REPLACED

Kansas City, Missouri's COVID-19 emergency order was set to expire at the end of the month. But Mayor Quinton Lucas made it clear Friday that private businesses can still set their own rules.Any … END_OF_DOCUMENT_TOKEN_TO_BE_REPLACED

KANSAS CITY, MO (KCTV/AP) — All restrictions meant to slow the spread of the coronavirus were being rescinded as of midday Friday in Kansas City, Missouri, following guidance from the U.S. Centers for … END_OF_DOCUMENT_TOKEN_TO_BE_REPLACED