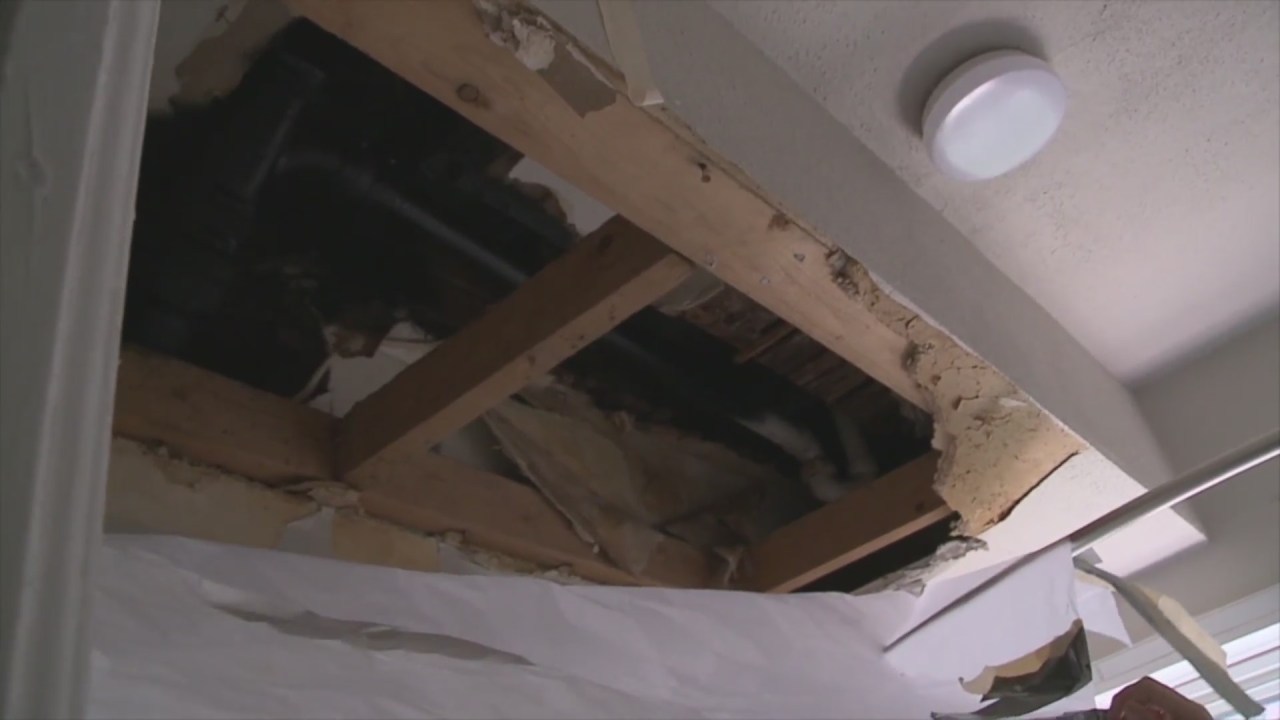 A portion of her bathroom ceiling collapsed two weeks earlier after a pipe burst, flooding her apartment.

“I actually put this paper up to catch the leaks,” said Looney who lives on Gladstone Boulevard in the city’s historic Northeast neighborhood.

Although one of the burst pipes was fixed by a maintenance crew for her apartment building, another pipe is still leaking despite repeated calls to the company that manages her building Rowan Property Management. She even made a personal visit to show them photos.

“I said ‘I want you to see what I have been living for the past 10 I think it was 12 days. She looked and said we’ll send someone right over.”

But the only “fix” that was done was spraying the leaking pipes with cans of Flex Seal. They’re still leaking. Looney said she is worried that the rest of the ceiling will fall in, plus her neighbor above her can see directly into her bathroom by lifting up an access panel to the plumbing.

“I’ve not showered here since July 4,” she said.

Instead she drives to her mother’s home in Raytown or a friend’s apartment in the River Market neighborhood to take a shower.

Frustrated, she called FOX4 Problem Solvers, wanting to know if she had grounds to break her lease which doesn’t end until December. We called attorney Gina Chiali who specializes in landlord-tenant law.

Chiali told Problem Solvers about Healthy Homes, a 3-year-old  program run by the Kansas City Health Department. It holds landlords’ accountable for unhealthy or unsafe conditions. Landlords who don’t fix violations can be fined and even banned from renting.

“We have seen some horrible things,” said Naser Jouhari, Kansas City, Missouri’s deputy health director. “Our goal is not to put landlords out of business. It is not to shut down a rental property. What we want is compliance.”

Healthy Homes will also take action against landlords who retaliate against renters who report them to Healthy Homes.

The next day, Healthy Homes sent two inspectors out to Looney’s apartment. They found multiple violations. Not only was there an active leak in one of the supposedly repaired pipes, but the walls were saturated with water and, of course, there was a large hole in the ceiling. The apartment was deemed not in good repair, according to the inspection report.

Healthy Homes gave the landlord three days to rectify the violations. After five days passed and the violations had yet to be corrected, the city did a second inspection and this time charged the landlord $150. That seemed to get the landlord’s attention. That very day Rowan Property Management sent a crew out to fix the pipe and rebuild the ceiling.

If you have actually thought of coming to be a qualified nursing assistant, but do not know if it corrects for you, the following list of main reasons to get into nursing might aid you make a … END_OF_DOCUMENT_TOKEN_TO_BE_REPLACED

In a since-deleted tweet responding to a question about a potential contract extension for Kansas City Chiefs safety Tyrann Mathieu, Mathieu tweeted that he's "probably not" going to get a new deal in … END_OF_DOCUMENT_TOKEN_TO_BE_REPLACED

KANSAS CITY, Mo. — A manhole left uncovered is the source of concern after a woman damaged her car in Kansas City. The single-car crash happened at 11th Street and Tracy Avenue during the busy … END_OF_DOCUMENT_TOKEN_TO_BE_REPLACED

Kansas City, Missouri's COVID-19 emergency order was set to expire at the end of the month. But Mayor Quinton Lucas made it clear Friday that private businesses can still set their own rules.Any … END_OF_DOCUMENT_TOKEN_TO_BE_REPLACED