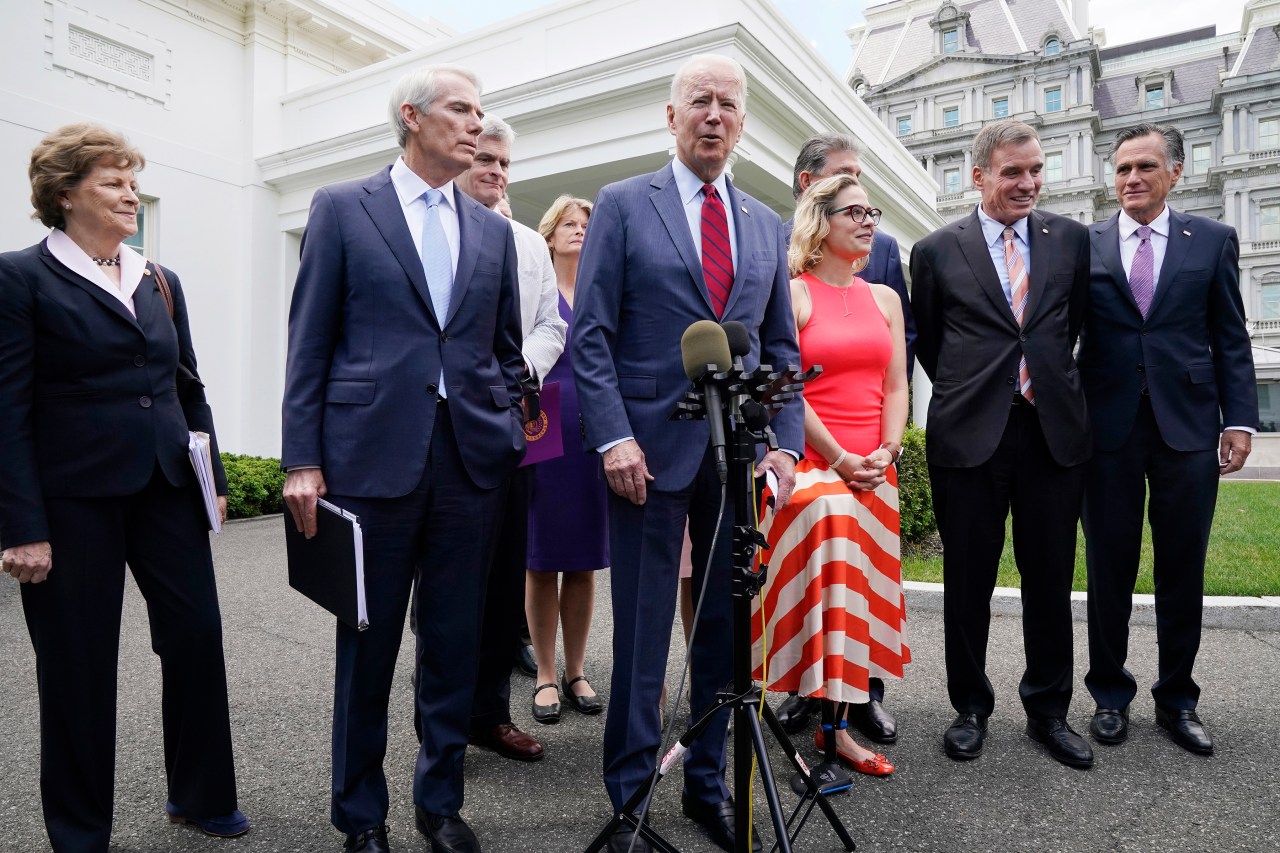 WASHINGTON — President Joe Biden announced on Thursday a hard-earned bipartisan agreement on a pared-down infrastructure plan that would make a start on his top legislative priority and validate his efforts to reach across the political aisle. He openly acknowledged that Democrats will likely have to tackle much of the rest on their own.

The bill’s price tag at $973 billion over five years, or $1.2 trillion over eight years, is a scaled-back but still significant piece of Biden’s broader proposals.

It includes more than a half-trillion dollars in new spending and could open the door to the president’s more sweeping $4 trillion proposals later on.

“When we can find common ground, working across party lines, that is what I will seek to do,” said Biden, who deemed the deal “a true bipartisan effort, breaking the ice that too often has kept us frozen in place.”

The president stressed that “neither side got everything they wanted in this deal; that’s what it means to compromise,” and said that other White House priorities would be tackled separately in a congressional budget process known as reconciliation

He made clear that the two items would be done “in tandem” and that he would not sign the bipartisan deal without the other, bigger piece. Progressive members of Congress declared they would hold to the same approach.

“This reminds me of the days when we used to get an awful lot done up in the United States Congress,” said Biden, a former Delaware senator, putting his hand on the shoulder of a stoic-looking Republican Sen. Rob Portman as the president made a surprise appearance with a bipartisan group of senators to announce the deal outside the White House.

The deal was struck after months of partisan rancor that has consumed Washington while Biden has insisted that something could be done despite skepticism from many in his own party. Led by Republican Portman of Ohio and Democrat Kyrsten Sinema of Arizona, the group included some of the more independent lawmakers in the Senate, some known for bucking their parties.

And Sen. Susan Collins, R-Maine, said, “It sends an important message to the world as well that America can function, can get things done.”

The proposal includes both new and existing spending and highlights the struggle lawmakers faced in coming up with ways to pay for it.

The investments include $109 billion on roads and highways, $15 billion on electric vehicle infrastructure and transit systems and $65 billion toward broadband, among other expenditures on airports, drinking water systems and resiliency efforts to tackle climate change.

Rather than Biden’s proposed corporate tax hike that Republicans oppose or the gas tax increase that the president rejected, funds will be tapped from a range of sources — without a full tally yet, according to the White House document.

Money will come from COVID-19 relief funds approved in 2020 but not yet spent, as well as untapped unemployment insurance funds that Democrats have been hesitant to poach. Other revenue is expected by going harder after tax cheats by beefing up Internal Revenue Service enforcement.

The rest is a hodge-podge of asset sales and accounting tools, including funds coming from 5G telecommunication spectrum lease sales, strategic petroleum reserve and an expectation that the sweeping investment will generate economic growth — what the White House calls the “macroeconomic impact of infrastructure investment.”

The senators from both parties stressed that the deal will create jobs for the economy, a belief that clearly transcended the partisan interests and created a framework for the deal.

For Biden, the deal was a welcome result.

Though for far less than the approximately $2 trillion he originally sought, which is raising some ire on the left, Biden had bet his political capital that he could work with Republicans and showcase that “that American democracy can deliver” and be a counter-example to rising autocracies across the globe.

Moreover, Biden and his aides believed that they needed a bipartisan deal on infrastructure to create a permission structure for more moderate Democrats — including Sinema and Joe Manchin of West Virginia — to then be willing to go for a party-line vote for the rest of the president’s agenda.

House Speaker Nancy Pelosi, like Biden, warned that it must be paired with the president’s bigger goals now being prepared by Congress under a process that could push them through the Senate with only Democratic votes.

“There ain’t going to be a bipartisan bill without a reconciliation bill,” Pelosi said.

Portman had met privately ahead of the White House meeting with Senate Republican leader Mitch McConnell at the Capitol and said afterward that the Kentucky senator “remains open-minded and he’s listening still.”

The announcement leaves unclear the fate of Biden’s promises of massive investment to slow climate change, which Biden this spring called “the existential crisis of our times.”

Biden’s presidential campaign had helped win progressive backing with pledges of major spending on electric vehicles, charging stations, and research and funding for overhauling the U.S. economy to run on less oil, gas and coal. The administration is expected to push for some of that in future legislation.

But Sen. Cassidy, R-La, stressed that there are billions of dollars for resiliency against extreme weather and the impacts of climate change and deemed Thursday’s deal a “beginning investment.”

Biden has sought $1.7 trillion in his American Jobs Plan, part of nearly $4 trillion in broad infrastructure spending on roads, bridges and broadband internet but also including the so-called care economy of child care centers, hospitals and elder care.

With Republicans opposed to Biden’s proposed corporate tax rate increase, from 21% to 28%, the group has looked at other ways to raise revenue. Biden rejected their idea to allow gas taxes paid at the pump to rise with inflation, viewing it as a financial burden on American drivers.

The broad reconciliation bill would likely include tax increases on the wealthy and corporations, so a tension still exists over funding for some Republicans and business groups. The U.S. Chamber of Commerce came out Thursday applauding the bipartisan infrastructure agreement, but Neil Bradley, its executive vice president, warned that “some in Congress are trying to torpedo the deal” unless they get trillions in additional spending.

The Democrats’ bigger proposal would run through the budget reconciliation process, which would allow passage of Biden’s priorities by majority vote, without the need for support from Republicans to overcome the Senate’s 60-vote threshold. It would require multiple rounds of voting that are likely to extend into fall.

In a since-deleted tweet responding to a question about a potential contract extension for Kansas City Chiefs safety Tyrann Mathieu, Mathieu tweeted that he's "probably not" going to get a new deal in … END_OF_DOCUMENT_TOKEN_TO_BE_REPLACED

KANSAS CITY, Mo. — A manhole left uncovered is the source of concern after a woman damaged her car in Kansas City. The single-car crash happened at 11th Street and Tracy Avenue during the busy … END_OF_DOCUMENT_TOKEN_TO_BE_REPLACED

Kansas City, Missouri's COVID-19 emergency order was set to expire at the end of the month. But Mayor Quinton Lucas made it clear Friday that private businesses can still set their own rules.Any … END_OF_DOCUMENT_TOKEN_TO_BE_REPLACED

KANSAS CITY, MO (KCTV/AP) — All restrictions meant to slow the spread of the coronavirus were being rescinded as of midday Friday in Kansas City, Missouri, following guidance from the U.S. Centers for … END_OF_DOCUMENT_TOKEN_TO_BE_REPLACED