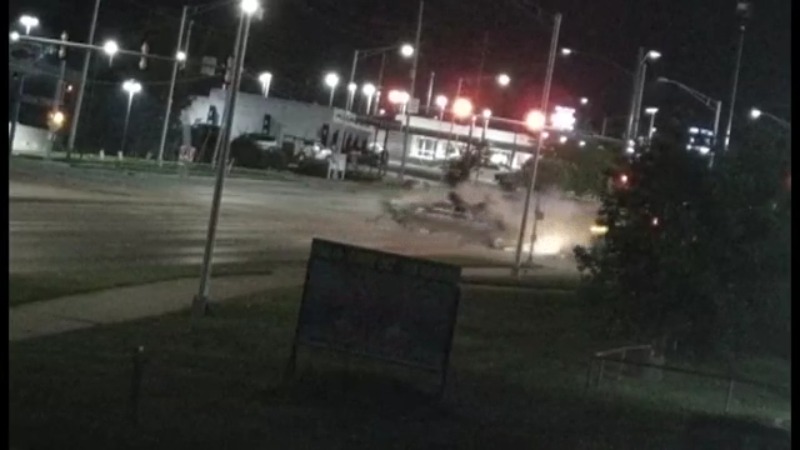 *Editors note: Due to the disturbing nature of the video, FOX4 has chosen to stop the video before the crash takes place*

Don Antonio’s, a restaurant nearby, caught the crash as it happened on its surveillance video that you can see in the video player above.

According to police, the crash happened at 75th and State Avenue just before 4 a.m. Both directions of traffic from 75th to 78th streets were closed to traffic for over 7 hours.

Neighbors told FOX4 around 4 a.m. they heard what sounded like a bomb going off.

When officers arrived, they learned two SUVs had crashed, leaving all six people in the vehicles injured. Five of the people had serious injuries but have since been upgraded to stable condition; the other was critically injured.

Police said none of the victims are under 16, but some of the occupants were teenagers.

Police said both drivers had to be extricated from their vehicles, and a few other passengers were thrown from the vehicles.

Some of the wreckage was thrown more than 100 feet away. One of the SUVs involved also knocked down a light pole, and crews have been working to repair the traffic signal on State Avenue.

With all the occupants in the hospital, police are investigating and working to document the crash. They suspect excessive speed might have played a role in the wreck.

Five of the people involved are in stable condition and one remains in critical condition.

“We would like to say two things. First and most important, we pray for a full recovery for all the victims – both physically and mentally. Second, while this accident remains under investigation, the damage on scene would indicate that speed was a contributing factor. And to that we beg of you, please, please slow down. Your life is precious, but it is not indestructible. Speeding may seem freeing, but it takes lives and leaves others forever scarred. For yourself and those who love you, please don’t speed.”

In a since-deleted tweet responding to a question about a potential contract extension for Kansas City Chiefs safety Tyrann Mathieu, Mathieu tweeted that he's "probably not" going to get a new deal in … END_OF_DOCUMENT_TOKEN_TO_BE_REPLACED

KANSAS CITY, Mo. — A manhole left uncovered is the source of concern after a woman damaged her car in Kansas City. The single-car crash happened at 11th Street and Tracy Avenue during the busy … END_OF_DOCUMENT_TOKEN_TO_BE_REPLACED

Kansas City, Missouri's COVID-19 emergency order was set to expire at the end of the month. But Mayor Quinton Lucas made it clear Friday that private businesses can still set their own rules.Any … END_OF_DOCUMENT_TOKEN_TO_BE_REPLACED

KANSAS CITY, MO (KCTV/AP) — All restrictions meant to slow the spread of the coronavirus were being rescinded as of midday Friday in Kansas City, Missouri, following guidance from the U.S. Centers for … END_OF_DOCUMENT_TOKEN_TO_BE_REPLACED