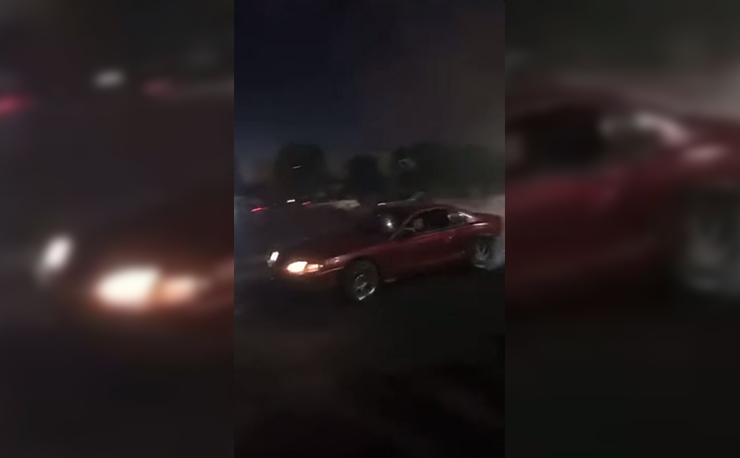 The car in the video struck a man of the crowd, sending him to the hospital with serious injuries, according to police.

KCKPD said a large crowd gathered near 1st and Osage around 9:45 p.m. Sunday.

A late 90’s model, Ford Mustang, which appears to be driven by a white male, was doing donuts surrounded by a group of over 100 onlookers. At the end of the clip, the car spins into the crowd, striking a 24 year-old man, breaking his leg and neck.

“This is serious,” the department said on its Facebook page. “We realize the driver of this vehicle didn’t head out Sunday night with the intent of seriously injuring someone; he was looking for fun. But, when your fun puts someone else in the hospital, it’s time to do the right thing and take responsibility.”

Police are asking the driver to come forward.

Police say if you attended this event and have information, a photo or video footage that can help KCKPD detectives in identifying the driver to call the TIPS Hotline at 816-474-TIPS.

“And please, don’t attend another sideshow,” the department said. “The next person injured – and it will happen – could be you.”

In a since-deleted tweet responding to a question about a potential contract extension for Kansas City Chiefs safety Tyrann Mathieu, Mathieu tweeted that he's "probably not" going to get a new deal in … END_OF_DOCUMENT_TOKEN_TO_BE_REPLACED

KANSAS CITY, Mo. — A manhole left uncovered is the source of concern after a woman damaged her car in Kansas City. The single-car crash happened at 11th Street and Tracy Avenue during the busy … END_OF_DOCUMENT_TOKEN_TO_BE_REPLACED

Kansas City, Missouri's COVID-19 emergency order was set to expire at the end of the month. But Mayor Quinton Lucas made it clear Friday that private businesses can still set their own rules.Any … END_OF_DOCUMENT_TOKEN_TO_BE_REPLACED

KANSAS CITY, MO (KCTV/AP) — All restrictions meant to slow the spread of the coronavirus were being rescinded as of midday Friday in Kansas City, Missouri, following guidance from the U.S. Centers for … END_OF_DOCUMENT_TOKEN_TO_BE_REPLACED