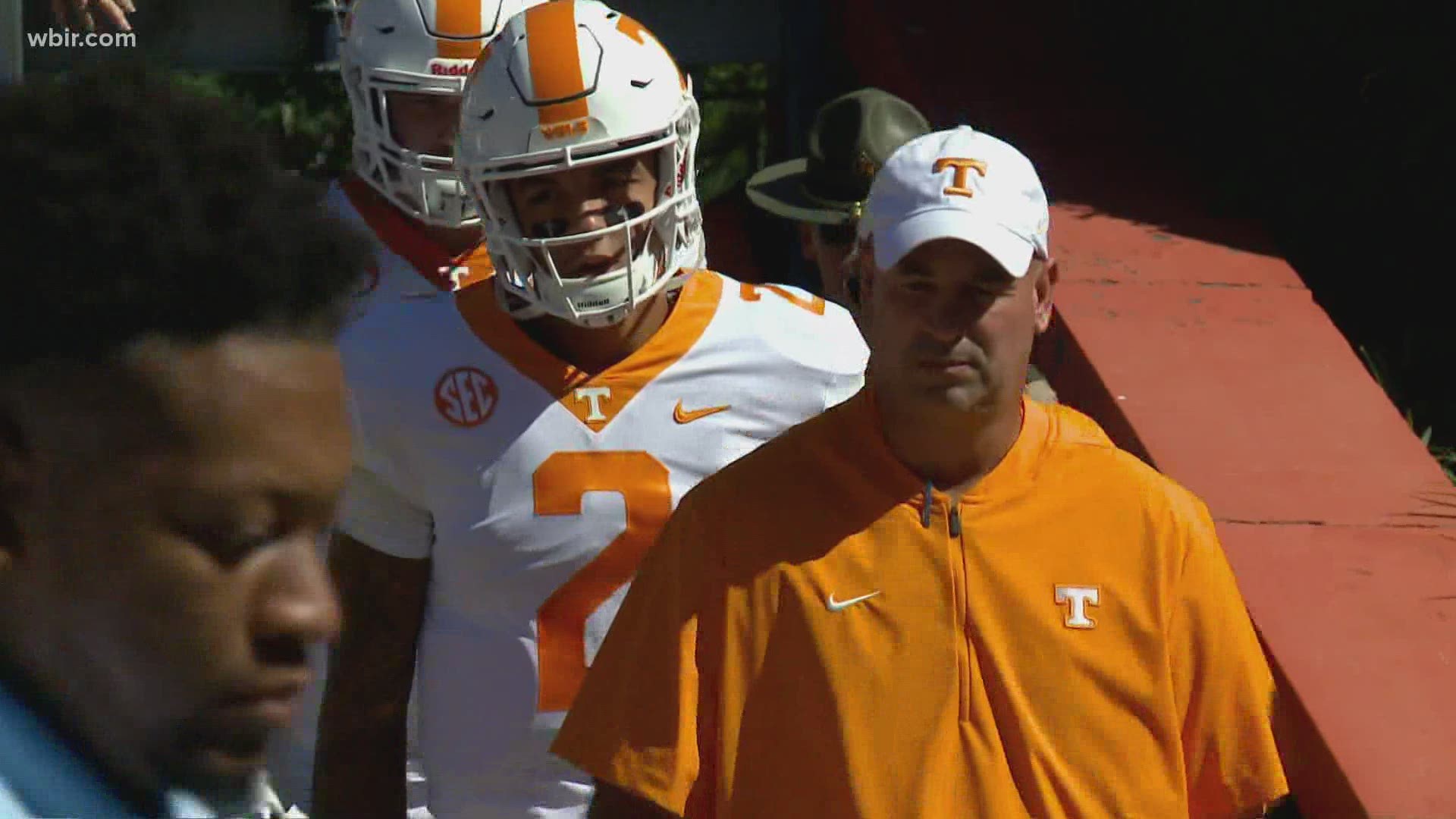 KNOXVILLE, Tenn. — More than seven months into its internal investigation of football recruiting violations, the University of Tennessee has run up a $665,000-plus legal and consulting tab.

Records requested by WBIR show an Overland Park, Kan., law firm that specializes in athletic compliance reviews has worked almost daily for UT on the case since Nov. 19.

UT hired Bond, Schoeneck & King in November 2020 days after Chancellor Donde Plowman learned then head coach Jeremy Pruitt and some of his staff may have violated football recruiting regulations. Pruitt was fired for cause in January.

Billing records indicate the most intense work by members of the Bond, Schoeneck firm occurred from December through April, requiring several trips to places such as Atlanta, Nashville and Indianapolis. Some destinations have been marked off as “privileged” on the firm’s invoices.

It’s not clear how much longer their work will go on or what progress they’ve made.

Responding to WBIR’s questions including whether the firm has submitted any interim reports or whether Plowman would have any comment, UT spokesman Owen Driskill said in an email the “university does not have any updates on the status of the investigation or additional records to provide at this time.”

WBIR has billing records from the start of Bond, Schoeneck’s hiring through May. The records request was made in June, and it wasn’t clear what if any work was performed by the firm for UT in that time.

Accounts are due within 30 days of work, records show.

Driskill said the Athletics Department is paying the bills for outside legal services.

Firm attorney Kyle Skillman, who specializes in representing universities in matters of NCAA infractions and compliance, has taken much of the lead in the case, records indicate. He got his law degree from the University of Kansas but his bachelor’s degree from Middle Tennessee State University in Murfreesboro.

Attorney Mike Glazier, who chairs the firm’s collegiate sports practice, also worked with UT a decade ago during an investigation into recruiting violations by then basketball coach Bruce Pearl. Glazier’s initials show up as taking part in the current football investigation.

“It is clear from the information that we have received that you were aware of the arrangement of impermissible recruiting visits and the provision of impermissible inducements to prospective student athletes…” letters to Niedermeyer and Felton stated.

Plowman and then-Athletic Director Phillip Fulmer concluded: “It is a sad day for all of us and I hope we all rebound from this unfortunate chapter. We wish you the best of luck.”

Plowman has said the firings came after discovering staff in the football program tried to conceal offenses from leadership.

UT has indicated it may face “serious” Level I and Level 2 NCAA violations, although no action yet has been taken.

Bond, Schoeneck’s role has been to help UT understand what happened. The precise nature of who they’ve talked to and for what purposes have been redacted in the invoices WBIR has obtained.

Starting Nov. 19 through March, someone from the firm has worked almost daily on the case. Skillman and senior counsel Kyle D. Ritchie flew to Knoxville Nov. 22 to familiarize themselves with the case and set to work, records show.

Since then there have been trips to Nashville, Atlanta and Indianapolis, where the NCAA is based. Travel occurred in November, January, February and March.

January marked the highest month of billings — $189,171. The original bill for the month was rejected and returned because a charge was calculated using an incorrect per diem rate, according to Driskill.

By April and May the firm’s level of work appeared to have dropped off in intensity, records show.

While personnel’s billable hours dominate the tab, “computerized research” has taken up a fair share of additional expenses, such as $740 in Lexis/Nexis research in February.

Under the terms of the firm’s hiring, Glazier gets a $500-an-hour rate and Skillman gets a $375-an-hour rate.

“Our billings with respect to this matter will be based on the time (in quarter-hour increments) that our attorneys, paralegals and other service professionals devote to it. The hourly rates for those attorneys, paralegals and other service professionals who could work on Client matters vary between $150 and $500, with specific rates reflecting the knowledge, experience and expertise of each individual assigned,” the firm’s retention letter states.

Besides the NCAA, the SEC also has been notified about the investigation.

Because he was terminated for cause, Pruitt will not receive the more than $12 million buyout built into his contract.

In a since-deleted tweet responding to a question about a potential contract extension for Kansas City Chiefs safety Tyrann Mathieu, Mathieu tweeted that he's "probably not" going to get a new deal in … END_OF_DOCUMENT_TOKEN_TO_BE_REPLACED

KANSAS CITY, Mo. — A manhole left uncovered is the source of concern after a woman damaged her car in Kansas City. The single-car crash happened at 11th Street and Tracy Avenue during the busy … END_OF_DOCUMENT_TOKEN_TO_BE_REPLACED

Kansas City, Missouri's COVID-19 emergency order was set to expire at the end of the month. But Mayor Quinton Lucas made it clear Friday that private businesses can still set their own rules.Any … END_OF_DOCUMENT_TOKEN_TO_BE_REPLACED

KANSAS CITY, MO (KCTV/AP) — All restrictions meant to slow the spread of the coronavirus were being rescinded as of midday Friday in Kansas City, Missouri, following guidance from the U.S. Centers for … END_OF_DOCUMENT_TOKEN_TO_BE_REPLACED