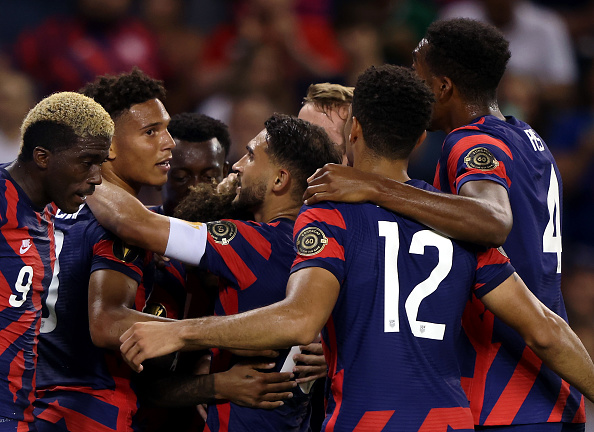 KANSAS CITY, Kan. – The U.S. Men’s Soccer team continued their quest Thursday to take home the Gold Cup with their second of three matches this week in Kansas City.

It was the second doubleheader of the week giving fans double the soccer for one price. Canada defeated Haiti 4-1 setting up a Sunday tilt to decide the Group Stage first place finisher. U.S.A. is guaranteed a berth in the quarterfinals after Thursday’s victory.

But many of the supporters in Kansas City for the matches have plenty of experience following the team.

“This is probably my 50th game seeing the US Men’s team,” Chase Tonkinson of Omaha said.

“This is going to be my husband’s 90th cap, this will be my 60th,” Lila Asnani of Las Vegas said.

“This will be number 184 and 185 this weekend. I’ve been going to games since 1991 with my grandfather I fly out to California and I’m watching him play in a high school stadium with like 90 fans,” said Bryan Heyman, visiting from Texas.

Now they are in Kansas City, hungry for barbecue, but also loving being in a city so hungry for the sport they love, the self-declared Soccer Capital of America.

“I know they want the World Cup I saw the sign downtown I hope they absolutely get it. We would be more than willing to come back if they had it,” Clayton Duggan of Greenville, South Carolina said

The Kansas City Sports Commission estimates being awarded World Cup matches in 2026 could have up to a $1 billion economic impact. The city seems to be winning over more than just fans so far.

“You can see it’s an integral part of this city. You walk around and see the trams with Sporting KC on them you see the building are painted with Sporting KC it definitely has a footprint in the city and that speaks to the soccer culture in the city,” U.S. Men’s National Soccer Team Coach Gregg Berhalter said.

In a since-deleted tweet responding to a question about a potential contract extension for Kansas City Chiefs safety Tyrann Mathieu, Mathieu tweeted that he's "probably not" going to get a new deal in … END_OF_DOCUMENT_TOKEN_TO_BE_REPLACED

KANSAS CITY, Mo. — A manhole left uncovered is the source of concern after a woman damaged her car in Kansas City. The single-car crash happened at 11th Street and Tracy Avenue during the busy … END_OF_DOCUMENT_TOKEN_TO_BE_REPLACED

Kansas City, Missouri's COVID-19 emergency order was set to expire at the end of the month. But Mayor Quinton Lucas made it clear Friday that private businesses can still set their own rules.Any … END_OF_DOCUMENT_TOKEN_TO_BE_REPLACED

KANSAS CITY, MO (KCTV/AP) — All restrictions meant to slow the spread of the coronavirus were being rescinded as of midday Friday in Kansas City, Missouri, following guidance from the U.S. Centers for … END_OF_DOCUMENT_TOKEN_TO_BE_REPLACED