Changes to the STAR bond district in the redeveloped Schlitterbahn area received committee approval and will go to the full UG Commission for approval Thursday. (Drawing from UG agenda documents) 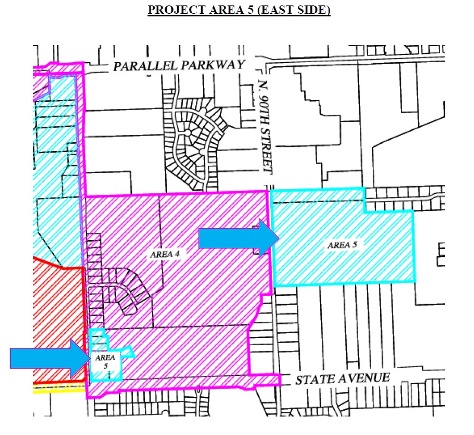 The eastern part of the STAR bond district, between State and Parallel east of 94th Street, includes project areas 4 and 5. (Drawing from UG agenda documents)

An expanded STAR bond district for the Village East area was approved at the June 7 Unified Government Economic Development and Finance Committee meeting.

The STAR bond district expansion was “fast-tracked” and added to the 7 p.m. Thursday, June 10, agenda for the full UG Commission.

According to developers for the Homefield project at the old Schlitterbahn property, a 300-acre area is being extended to 350 acres.

There is an extended area east of 94th Street between Parallel and State Avenue.

According to UG Administrator Doug Bach, the developer has already spent more than $20 million in land acquisition and demolition costs so far.

He said they want to bring in a new development called Perfect Game.

Heineman said Perfect Game is a very high quality operator that runs tournaments throughout the country. He said developers were able to attract Perfect Game to the Kansas City area.

Heineman said they have closed on property for the new Fairfield Inn, a 90-room hotel.

They have signed a letter of intent with a water-themed resort-style hotel to have more than 300 rooms, he added. It would be a full-service hotel. Another hotel is possible, with around 100 rooms.

Also in the STAR bond area, two more car dealerships are slated to open in mid-2022.

According to UG officials, the STAR bonds for this project affect only sales tax. Property taxes are not affected.

The EDF Committee also approved an ordinance on the amended project plans for areas 2B, 3 and 5 within the Village East STAR Bond District. This action set a public hearing for the project on June 24.

The committee also approved a resolution authorizing the execution of a supplemental indenture with regard to an industrial revenue bond issue from 2017 for the Dairy Farmers of America project.

In other action, the Neighborhood and Community Development Committee killed a proposal for a development that would have been built with shipping containers at 3119 Strong Ave. The proposal died when no one made a motion for it. It could be brought back again later, according to commissioners.

The applicant, Oliver Tanner, wanted to use Land Bank property to build an area ringed by decorated or painted shipping containers, with an open courtyard in the middle including picnic tables. There would be a food truck, with pizza available.

The idea was held over from a past meeting so that commissioners could hear about it.

Commissioner Jim Walters said he’s not a fan of shipping containers being used for building projects in Wyandotte County. It is a prominent corner at 32nd and Strong, and it would not be the highest and best use of this land, he said.

Ramon Murguia, an attorney, told the committee he had an office across from this location. He said there had been several investments in the area in recent years, including a new library nearby. Offices and a bank are very close to the location.

Tanner said he has been looking at ways to bring up the appearance of the shipping containers. He said he wanted to work with the community. He said he would do whatever was needed to accommodate the community and keep up the professional appearance.

Jeff Bryant agreed it was more of a brick-and-mortar neighborhood and not an industrial or warehouse neighborhood. Commissioner Brian McKiernan agreed there were other places where this project would fit in better.

The EDF meeting, with more information about these projects, also is on YouTube at https://www.youtube.com/watch?v=CwLIjDiHrVI.

In a since-deleted tweet responding to a question about a potential contract extension for Kansas City Chiefs safety Tyrann Mathieu, Mathieu tweeted that he's "probably not" going to get a new deal in … END_OF_DOCUMENT_TOKEN_TO_BE_REPLACED

KANSAS CITY, Mo. — A manhole left uncovered is the source of concern after a woman damaged her car in Kansas City. The single-car crash happened at 11th Street and Tracy Avenue during the busy … END_OF_DOCUMENT_TOKEN_TO_BE_REPLACED

Kansas City, Missouri's COVID-19 emergency order was set to expire at the end of the month. But Mayor Quinton Lucas made it clear Friday that private businesses can still set their own rules.Any … END_OF_DOCUMENT_TOKEN_TO_BE_REPLACED

KANSAS CITY, MO (KCTV/AP) — All restrictions meant to slow the spread of the coronavirus were being rescinded as of midday Friday in Kansas City, Missouri, following guidance from the U.S. Centers for … END_OF_DOCUMENT_TOKEN_TO_BE_REPLACED