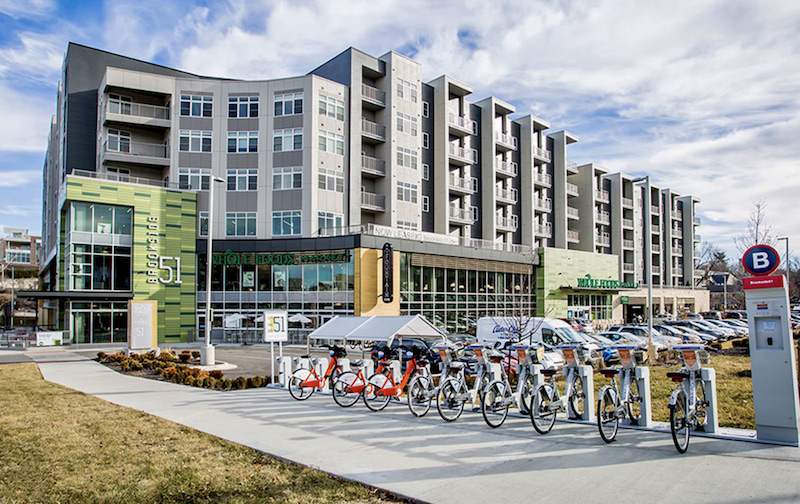 
Above image credit: The University of Missouri-Kansas City is proposing housing for 500 students at the planned streetcar terminus by its campus. (Rendering | UMKC master plan)

The proposed development is part of a larger UMKC Master Plan 2021 for the Volker and Hospital Hill campuses. The 3.5-mile streetcar extension on Main Street from downtown to UMKC is expected to begin operations in early 2025.

“We’ve said numerous times we see this as a wonderful opportunity and look forward to working with the Streetcar Authority and the city to maximize the potential it presents,” said John Martellaro, spokesman for the UMKC.

The proposed streetcar-related development, however, is in its very preliminary stages.

The (1) streetcar terminus would serve a (2) 200- apartment project, a (3) 300-unit project for first-year students, (4) retail space and (5) recreational fields in a conceptual master plan prepared by the University of Missouri-Kansas City. (Site plan | UMKC master plan)

“There is no funding or RFP (request for proposals),” Martellaro said.

“This is based on conversations with neighbors and people on campus about what they’d like to see and our concept of what our future could look like.”

The proposed streetcar-related development site is where the ill-fated Oak Place Apartments project had been located. That 500-student residential development opened in 2008 and was closed in 2018 because of water and mold damage.

Work is well underway on the $350 million extension of the streetcar from its current terminus at Union Station to UMKC via Main Street.

The Brookside 51 apartment and Whole Foods development opened in 2018 near the planned streetcar terminus. (Rendering | VanTrust)

Separately, the Streetcar Authority expects to begin construction next year on a one-half mile extension of the streetcar route from the River Market to Berkley Riverfront Park.

By 2025, a streetcar line extending 6.2 miles from UMKC to the riverfront is expected to be operational.

Martellaro said there is no specific time when UMKC would begin implementing its proposed streetcar-related development.

“At some point, we may begin initial steps or someone may come to us,” he said.

There already has been a major investment near the planned terminus of the streetcar. VanTrust Real Estate opened Brookside 51, a 170-unit apartment project and Whole Foods grocery store at 51st and Oak streets, in 2018.

Flatland contributor Kevin Collison is the founder of CityScene KC, an online source for downtown news and issues.

In a since-deleted tweet responding to a question about a potential contract extension for Kansas City Chiefs safety Tyrann Mathieu, Mathieu tweeted that he's "probably not" going to get a new deal in … END_OF_DOCUMENT_TOKEN_TO_BE_REPLACED

KANSAS CITY, Mo. — A manhole left uncovered is the source of concern after a woman damaged her car in Kansas City. The single-car crash happened at 11th Street and Tracy Avenue during the busy … END_OF_DOCUMENT_TOKEN_TO_BE_REPLACED

Kansas City, Missouri's COVID-19 emergency order was set to expire at the end of the month. But Mayor Quinton Lucas made it clear Friday that private businesses can still set their own rules.Any … END_OF_DOCUMENT_TOKEN_TO_BE_REPLACED

KANSAS CITY, MO (KCTV/AP) — All restrictions meant to slow the spread of the coronavirus were being rescinded as of midday Friday in Kansas City, Missouri, following guidance from the U.S. Centers for … END_OF_DOCUMENT_TOKEN_TO_BE_REPLACED