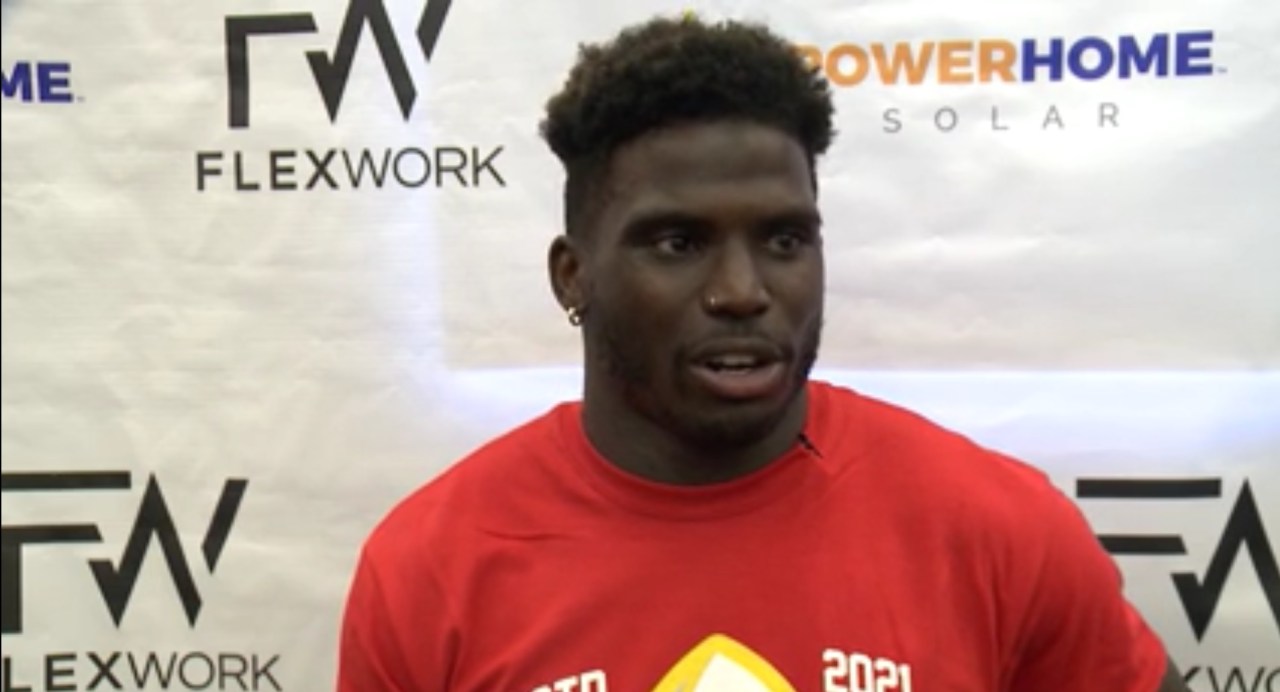 “As a kid, I once grew up wanting to attend camps like this to meet my idols,” Hill said. “I’m just trying to be a positive role model in the community.”

The “Cheetah” said he believes motivating and helping the next generation of football players is his purpose, and maybe he can help them achieve their goals of playing at the next level.

“I was always coachable. I always wanted to take the next step to be great. I want to tell them the same thing,” Hill said. “Not everybody is gonna have a Patrick Mahomes arm or Travis Kelce ability to get open or be able to run a 4.2, but if you’re coachable and you work hard maybe those things can be attainable for you.”

#Chiefs WR Tyreek Hill was in Overland Park hosting a youth football camp. A coach at heart, he says:
“Not everybody’s going to have a Mahomes arm, or Kelce’s ability to get open or be able to run a 4.2, but if you’re coachable and you work hard, those things are attainable.” pic.twitter.com/SsMNHvDdAI

‘I’ll never play for Andy Reid again’: Le’Veon Bell replies to fan’s comment asking if he was re-signed by Chiefs

He added that coachability is one of the most important skills than can help push you over the top.

Hill is a known competitor and he even brings that competitive energy to his camps.

At one of his previous camps, a viral video surfaced of a camper catching a ball one-handed while being guarded by Hill.

Known as “Getting Mossed”, in reference to former NFL legend Randy Moss, Hill said he doesn’t want that to happen again.

“I always bring 100% from now on. I don’t want to be on Bleacher Report for getting ‘Mossed’ by a kid, then I can’t walk into the Chiefs locker room without everybody clowning me.”

Speaking of Moss, Hill said his dream wide receiver partner would be the Hall of Famer to create a deadly combination.

“Just his skillset alone. Being able to run a 4.2, having a freakish vertical, being a heck of an athlete,” Hill said. “Setting a standard down the field and me creasing it up down the middle, that would be a crazy combo, especially, with Patrick Mahomes throwing the ball. It’d be crazy.”

In a since-deleted tweet responding to a question about a potential contract extension for Kansas City Chiefs safety Tyrann Mathieu, Mathieu tweeted that he's "probably not" going to get a new deal in … END_OF_DOCUMENT_TOKEN_TO_BE_REPLACED

KANSAS CITY, Mo. — A manhole left uncovered is the source of concern after a woman damaged her car in Kansas City. The single-car crash happened at 11th Street and Tracy Avenue during the busy … END_OF_DOCUMENT_TOKEN_TO_BE_REPLACED

Kansas City, Missouri's COVID-19 emergency order was set to expire at the end of the month. But Mayor Quinton Lucas made it clear Friday that private businesses can still set their own rules.Any … END_OF_DOCUMENT_TOKEN_TO_BE_REPLACED

KANSAS CITY, MO (KCTV/AP) — All restrictions meant to slow the spread of the coronavirus were being rescinded as of midday Friday in Kansas City, Missouri, following guidance from the U.S. Centers for … END_OF_DOCUMENT_TOKEN_TO_BE_REPLACED