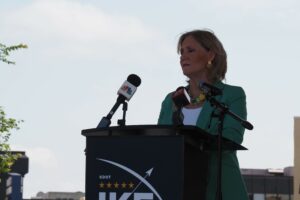 TOPEKA — Construction on nearly three-quarters of a billion dollars in modernization and expansion projects for critical Kansas roadways will soon be underway across the state, Gov. Laura Kelly announced Thursday.

Eight projects are planned in eastern Kansas, nine out west, six in the south-central region and one significant project in the Overland Park area, Kelly said during a stop in Topeka. Efforts include expanding historically deadly road shoulders, adding new passing lanes on narrower highways and updating interchanges.

“Investments in infrastructure are like a relay race. Each generation must carry the torch so the next generation can go farther,” she said. “These investments will make our roads safer, create good jobs and deliver more economic opportunities to our state now and into the future.”

The road improvements are part of the 10-year Eisenhower Legacy Transportation Program, or IKE, passed and initiated by the governor and Kansas Legislature in April 2020. Most of the projects will begin in 2023. As president, Dwight D. Eisenhower supported the Federal-Aid Highway Act of 1956, which established the program for funding and building the country’s interstate highway system.

In Shawnee County and surrounding eastern Kansas counties investments total nearly $290 million, with the lion’s share of those funds being spent replacing a 58-year-old viaduct on U.S. Highway 70 in Topeka. In Bourbon and Crawford County, K-7 will be widened and shoulders will be added, increasing safety on a narrower roadway.

Improvements in south-central Kansas total $129 million and will address needs in Sedgwick, Sumner, Harvey and Marion counties. One notable planned improvement would expand three passing lanes on a particularly prickly stretch of U.S. Highway 50 between Burrton and Peabody.

A $300 million expansion of U.S. Highway 69 — a top infrastructure priority of the region — will add a third toll lane, replace the old pavement and reconfigure two interchanges in Overland Park.

Most of these IKE projects, overseen by Transportation Secretary Julie Lorenz, will begin construction in 2023. IKE is a 10-year transportation plan approved in April of last year. (Noah Taborda/Kansas Reflector)

More than $50 million in western Kansas will rehabilitate a portion of highway in Hodgeman County and extend passing lanes on U.S. Highway 54 in Meade, Kiowa and Pratt counties, among other projects.

Rep. Richard Proehl, a Parsons Republican, noted that the Kansas Department of Transportation has found that past projects to add or extend shoulders and passing lanes have reduced crashes by 32% and decreased fatalities and injuries by 14%.

“Practical improvements are just that. They are important, smaller in scope and therefore less costly and can be built much sooner,” Proehl said. “It really boils down to one thing: safety, safety, safety.”

Transportation Secretary Julie Lorenz praised a diverse approach to transportation infrastructure in Kansas, one that brings together people from various industries, communities and political backgrounds. She said through these collaborative efforts, Kansas could get more done to benefit all.

“Transportation is about knitting together rural and urban areas,” Lorenz said. “Modern transportation moves people and goods and now it moves technology and data. It’s about roads and bridges and it’s about transit and it’s about bikes and pedestrians and, under the IKE program, it’s also about broadband.”

In a since-deleted tweet responding to a question about a potential contract extension for Kansas City Chiefs safety Tyrann Mathieu, Mathieu tweeted that he's "probably not" going to get a new deal in … END_OF_DOCUMENT_TOKEN_TO_BE_REPLACED

KANSAS CITY, Mo. — A manhole left uncovered is the source of concern after a woman damaged her car in Kansas City. The single-car crash happened at 11th Street and Tracy Avenue during the busy … END_OF_DOCUMENT_TOKEN_TO_BE_REPLACED

Kansas City, Missouri's COVID-19 emergency order was set to expire at the end of the month. But Mayor Quinton Lucas made it clear Friday that private businesses can still set their own rules.Any … END_OF_DOCUMENT_TOKEN_TO_BE_REPLACED

KANSAS CITY, MO (KCTV/AP) — All restrictions meant to slow the spread of the coronavirus were being rescinded as of midday Friday in Kansas City, Missouri, following guidance from the U.S. Centers for … END_OF_DOCUMENT_TOKEN_TO_BE_REPLACED