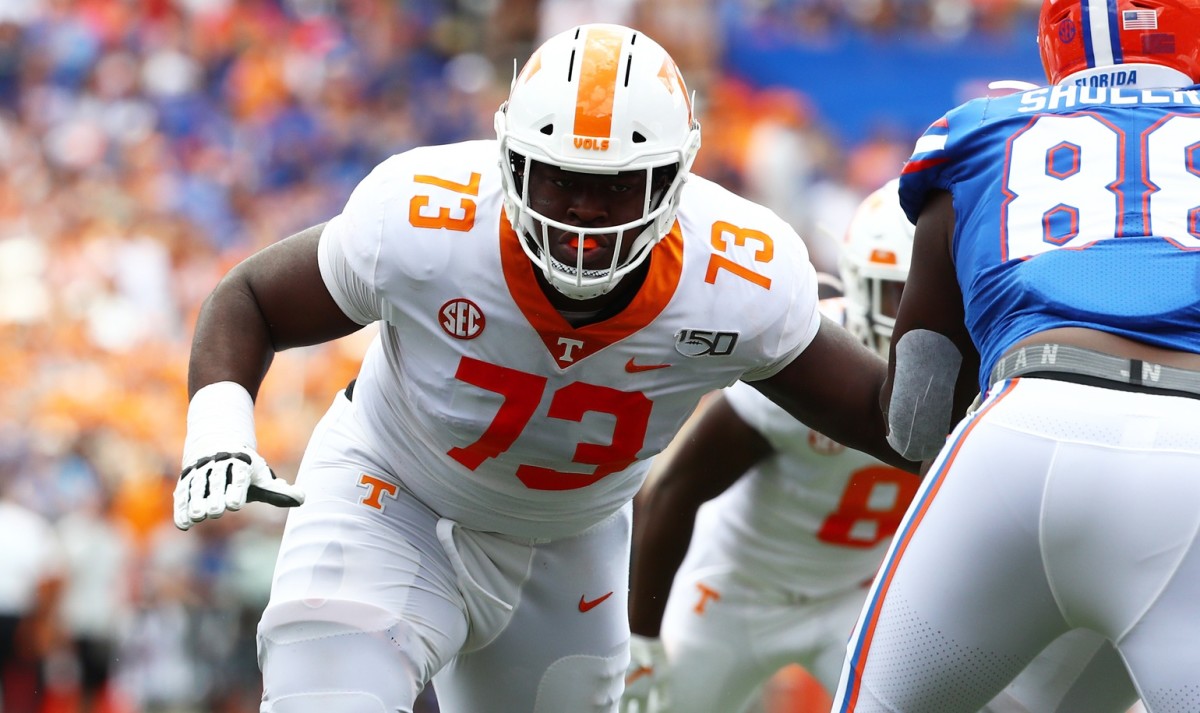 Despite the popular opinion that the Kansas City Chiefs would refrain from playing multiple rookies along the offensive line, one of their first-year maulers is already finding ways to stand out.

As the team moves forward after a complete offseason overhaul of the unit responsible for protecting Patrick Mahomes, competition is everywhere. The only two certainties at the moment (as mentioned by Arrowhead Report’s Tucker Franklin) are that Orlando Brown Jr. and Joe Thuney will start at left tackle and left guard, respectively. Rookie Creed Humphrey very well could be the team’s starting center.

Unfortunately, the guard picture became a bit more hazy on Thursday when Kyle Long suffered a knee injury that could sideline him until the start of the regular season. Long, who is returning to football after taking a year off, was a trendy pick to be the Chiefs’ starting right guard to begin the season. When asked about the updated state of that position, head coach Andy Reid mentioned rookie Trey Smith among several veterans.

“We’re lucky that we have some good players in there,” Reid said. “One of which, Trey Smith, can get some work in too. Then, Larry [Laurent Duvernay-Tardif] is kind of back, so you add all of that in there, and [Andrew] Wylie who’s got a couple of years starting under his belt. So, we’re okay there. [Nick] Allegretti, likewise.”

Smith, a sixth-round pick in this year’s NFL Draft, experienced quite the slide, primarily due to medical concerns. Blood clots in Smith’s lungs hindered him in the past, at one point casting a dark cloud over his 2018 season. Citing his tape and ability to perform when healthy, the former Tennessee standout was deemed a Day 3 draft steal by many. That hype train has only sped up following Long’s injury.

Smith is in a rare situation. Not only does he have a grand total of zero professional snaps under his belt, but the medicals are at least a tad concerning. That combination usually results in a redshirt rookie campaign. In the face of adversity, he’s managed to make a terrific first impression not only on his coaches but also on his new teammates. Left guard Joe Thuney is a big fan of Smith.

“Trey works really, really hard,” Thuney said. “He’s just getting into his playbook a lot, too. He’s a strong guy, he works hard and he’s explosive. It’s been fun getting to know him and all the guys. Like I said, just taking it a day at a time.”

With Brown, Thuney and possibly Humphrey, the Chiefs have a great mix of youth, experience and potential. The left side of the offensive line projects to be a major strength this upcoming season. Humphrey, who was highly-touted heading into the draft, is capable of anchoring the line as a first-year starter. The right side, on the other hand, is a work in progress. Smith is no different, nor is returning 2020 opt-out tackle Lucas Niang.

All things considered, taking things one day at a time is a good way to encapsulate the Chiefs’ plan for the new offensive line. With that said, don’t count Smith out. He may have the odds stacked against him, but he’s overcome that before. If early reports from OTAs are any indication, the rookie may capitalize on the opportunity placed in front of him. If that happens, the youth movement in the trenches could be arriving sooner than the Chiefs anticipated.

Read More: The Best-Case Scenario for the Chiefs’ Offensive Line Could Be Magnificent

In a since-deleted tweet responding to a question about a potential contract extension for Kansas City Chiefs safety Tyrann Mathieu, Mathieu tweeted that he's "probably not" going to get a new deal in … END_OF_DOCUMENT_TOKEN_TO_BE_REPLACED

KANSAS CITY, Mo. — A manhole left uncovered is the source of concern after a woman damaged her car in Kansas City. The single-car crash happened at 11th Street and Tracy Avenue during the busy … END_OF_DOCUMENT_TOKEN_TO_BE_REPLACED

Kansas City, Missouri's COVID-19 emergency order was set to expire at the end of the month. But Mayor Quinton Lucas made it clear Friday that private businesses can still set their own rules.Any … END_OF_DOCUMENT_TOKEN_TO_BE_REPLACED

KANSAS CITY, MO (KCTV/AP) — All restrictions meant to slow the spread of the coronavirus were being rescinded as of midday Friday in Kansas City, Missouri, following guidance from the U.S. Centers for … END_OF_DOCUMENT_TOKEN_TO_BE_REPLACED