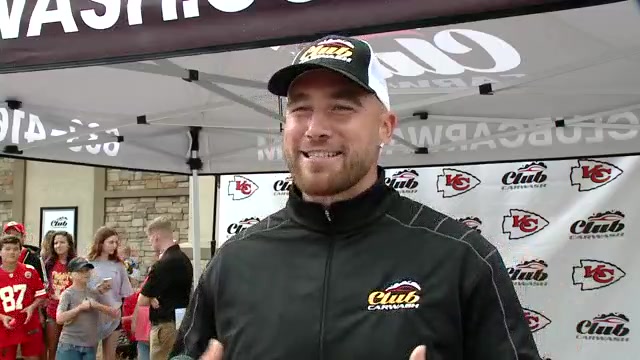 OVERLAND PARK, Kan. — The Kelce family is weighing in on how fans pronounce Travis’ and Jason’s last name.

The controversy surfaced Wednesday during an episode of the Barstool Sports podcast Bussin’ With The Boys. Travis Kelce was a guest on the podcast. During the discussion, Kelce shocked everyone when he said people mispronounce his last name.

so I’ve been saying his name wrong this entire time 😬

Kelce later responded, telling his teammates they’ve been calling him the right name. According to Kelce, one is his real name and the other is a nickname, but he didn’t clarify which is which.

Since we know Kelce loves to joke around, FOX4’s Dave D’Marko contacted Travis Kelce’s mom and asked her to set the record straight.

When you can’t tell if NFL Superstars are playing with you, go straight to the source, their mother. @tkelce ‘s mom tells me it “Kell-cee” #mysterysolved

“It turned into its own thing, didn’t it? Started running around,” Kelce said when FOX4 asked him about his last name during an appearance in Overland Park Thursday morning. “It’s absolutely hilarious that it got to this point.”

“My real name is ‘Kel-see.’ It’s Travis ‘Kel-see,’ and I say ‘Kel-see’ because that’s what my father says. Everybody on my father’s side says ‘Kelss.’ I go by both. One is a real name, one’s a nickname,” Kelce said.

Kelce then shared the story about how he ended up talking about his last name on the podcast in the first place.

“The video everybody saw was me absolutely screwing up Tyler Lewan’s name … Taylor Lewan’s name. I just did it again!” Kelce said. “That was me trying to make him feel better about me butching his name.”

Chiefs’ Travis Kelce explains why he decided to get vaccinated

But the story doesn’t end there. Apparently one side of the Kelce family really does pronounce the last name ‘Kelss.”

Jason Kelce, Travis’ brother and Philadelphia Eagles center, put an end to the discussion when he called into SportsRadio 94WIP in Philadelphia and spoke to Joe DeCamara & Jon Ritchie.

“My brother and I have gone by Kel-see our entire lives. And I still remember my dad answering the phone as ‘Ed Kelce’ all growing up when he was on work calls and everything. So, our side of the family has always gone by Kel-see. But we have a really small family. We don’t have any first cousins. My grandfather on that side was dead before I was born. So, somehow we got so disconnected with that side. And my dad, at some point when he was working in the steel mills in Cleveland, Ohio, got tired of correcting everybody who was calling him Kel-SEE. Apparently, the ‘correct’ pronunciation, the standard pronunciation is Kelss. That’s what the rest of the family goes by. So, my dad, out of pure laziness completely changed his last name. And now, I think we’re at the point where we’re both riding with Ed Kel-See. He’s, for some reason, decided to change it and that’s what we’ve gone by our whole lives,” Jason Kelce said.

The good thing for fans of either Jason or Travis, both brothers agree on one thing.

“To be honest, I don’t care which one you call me man. I appreciate everybody’s support,” Travis Kelce said.

In a since-deleted tweet responding to a question about a potential contract extension for Kansas City Chiefs safety Tyrann Mathieu, Mathieu tweeted that he's "probably not" going to get a new deal in … END_OF_DOCUMENT_TOKEN_TO_BE_REPLACED

KANSAS CITY, Mo. — A manhole left uncovered is the source of concern after a woman damaged her car in Kansas City. The single-car crash happened at 11th Street and Tracy Avenue during the busy … END_OF_DOCUMENT_TOKEN_TO_BE_REPLACED

Kansas City, Missouri's COVID-19 emergency order was set to expire at the end of the month. But Mayor Quinton Lucas made it clear Friday that private businesses can still set their own rules.Any … END_OF_DOCUMENT_TOKEN_TO_BE_REPLACED

KANSAS CITY, MO (KCTV/AP) — All restrictions meant to slow the spread of the coronavirus were being rescinded as of midday Friday in Kansas City, Missouri, following guidance from the U.S. Centers for … END_OF_DOCUMENT_TOKEN_TO_BE_REPLACED