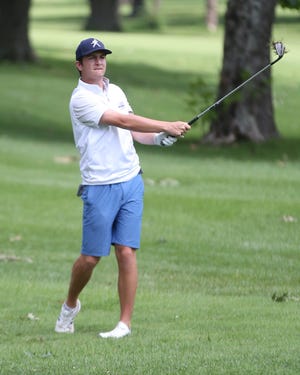 Andrew Beckler’s run to the quarterfinals of the 111th Kansas Amateur came as little surprise.

As the No. 1 seed in the bracket after taking medalist honors in the stroke play portion of the event and coming off a historic collegiate senior, those were the expectations.

The run of Topekan Hayden Beck to the same spot? Well, that’s a bit of an eye-opener.

A Washburn Rural product who jut finished his freshman year at Washburn, Beck enjoyed a big day Friday to advance the deepest he ever has at the Amateur.

Unfortunately for both, their runs ended there. Beckler dropped a 4&3 decision to Overland Park’s Michael Winslow, a recent Aquinas graduate. Beck fell 4&2 to Wichita’s Cooper Schultz.

Beck started Friday with a 1-up win over former Kansas Jayhawk Conrad Roberts, rallying from an early 2-down deficit through three holes. Beck won three of the next five holes to take a 1-up lead at the turn and then twice went 2-up on the back nine before settling for his 1-up win.

In his afternoon third-round match, Beck also claimed a 1-up win, beating Wichita’s Charlie Stevens. Neither golfer led by more than 1-up in the tight match with Stevens taking a 1-up lead after No. 13 with a par.

But Beck won the next two holes to swing the match in his favor and after Stevens tied the match by winning No. 16, Beck made par on 17 to a bogey by Stevens and then halved the final hole for the win.

In the quarterfinal loss to Schultz, Beck lost the second hole, but was holding strong, halving the next 10 holes before he ran into trouble on No. 13 and conceded the hole. He bogeyed the next to fall 3-down and saw Schultz close out the win on No. 16.

Beckler, meanwhile, followed a dominating 8&7 win over Garden City’s Sean Thayer in the second round with a 1-up win over Coffeyville’s Troy Watson in the third round.

All square through six holes, Becker claimed a 1-up lead with a birdie on No. 7 and held that advantage through 11 holes. After winning 12 with a par, Beckler birdied No. 13 to go 3-up with five to play.

But Watson made a charge, making eagle on No. 14 and a birdie on 15 to cut Beckler’s lead to 1-up. Both parred their way home, giving Beckler the 1-up win.

In Saturday’s quarterfinals, Winslow jumped out to a quick 2-up lead with wins on the first two holes. Beckler got the match back to even and took a 1-up lead at the turn by winning No. 9.

But Winslow took control on the back, winning five of the first six holes to close out the win.

In a since-deleted tweet responding to a question about a potential contract extension for Kansas City Chiefs safety Tyrann Mathieu, Mathieu tweeted that he's "probably not" going to get a new deal in … END_OF_DOCUMENT_TOKEN_TO_BE_REPLACED

KANSAS CITY, Mo. — A manhole left uncovered is the source of concern after a woman damaged her car in Kansas City. The single-car crash happened at 11th Street and Tracy Avenue during the busy … END_OF_DOCUMENT_TOKEN_TO_BE_REPLACED

Kansas City, Missouri's COVID-19 emergency order was set to expire at the end of the month. But Mayor Quinton Lucas made it clear Friday that private businesses can still set their own rules.Any … END_OF_DOCUMENT_TOKEN_TO_BE_REPLACED

KANSAS CITY, MO (KCTV/AP) — All restrictions meant to slow the spread of the coronavirus were being rescinded as of midday Friday in Kansas City, Missouri, following guidance from the U.S. Centers for … END_OF_DOCUMENT_TOKEN_TO_BE_REPLACED