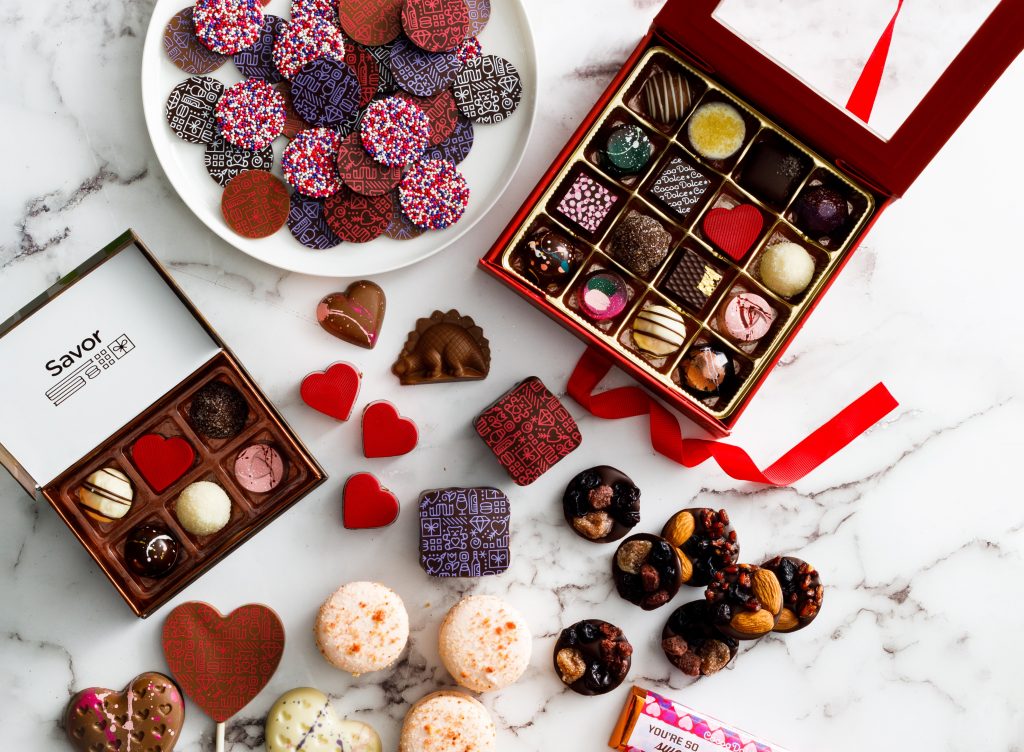 I’m sorry to admit that I’ve never been to what sounds like a chocolate utopia in Wichita.

That would be the Cocoa Dolce‘s downtown location, where customers can watch the production of candy and pastries for sale in one of the company’s three Wichita locations — or shipped anywhere around the world.

Branding itself as a “sweet lounge,” the company is proud of its artisanal, small-batch chocolates made of fair-trade ingredients, as well as the coffee and mixed drinks it serves in an atmosphere where front-of-the house staffers can provide a “concierge experience for those who aren’t familiar with chocolate flavors and profiles,” said Kwesi Robertson, who handles the company’s marketing.

They’re especially busy at the moment.

“Right now, people can’t get enough of our macarons,” Robertson said. “Those are always a crowd pleaser, but especially for Valentine’s Day they’re something different, a little bit unexpected, especially in Wichita and Kansas.”

“Typically when you see them, it’s in a fancy restaurant or someplace you don’t frequent,” he explained. “We’ll walk them through what it is, tell them about different flavors. We make people feel comfortable exploring different things.”

I was talking to Robertson about Cocoa Dolce for the same reason I’ve occasionally spoken with other small-business owners around Kansas: to hear directly from them about how they’re navigating the pandemic as a gut check to whatever Topeka politicians are saying about how well their party is taking care of the state’s mom and pops.

Cocoa Dolce employs 76 people, most of them in retail, at three locations in Wichita. The 15 packaging and production workers include four certified chocolatiers and three pastry chefs.

“It’s been interesting to say the least,” Robertson said of adapting to the pandemic. “We were set up to be like every other local business, so struggling to be relevant when being in contact was really hard.”

Their priority was safety, he said, for employees and customers.

“We decided to pretty much gut our retail lobbies to make sure they couldn’t be overwhelmed with people,” he said, “and started also pushing really hard with online and mobile orders.”

The challenge was how to translate that “concierge” experience and the sensual in-person visuals to “the digital space.”

They took all new photographs of their products, upped their social media game and improved their online shopping experience. These were things they’d been talking about, but they hustled to rise to the “new normal” ahead of the busy holiday season.

Emphasizing the transition to online stores, Robertson said, allowed them to promote the idea of “social distancing sweetly.”

“It’s just a small piece of chocolate. How does that make a difference?” he said.

For me, that’s a rhetorical question. But for Robertson, that answer is key to his job.

Sending people chocolates is “a really cathartic way of trying to connect when you can’t,” he said, adding that he saw other people doing similar things.

“I have never bought stamps before, or handwritten letters,” he said. “Sending a box of chocolates was a cherry on top to my friends and family. Because I couldn’t see them during Thanksgiving, that really made a difference.”

The online business has helped counter the lag of in-store activity, he said.

“A lot of people are reaching for items that make them not only comfortable but safe in a time of uncertainty,” Robertson said. “Luckily we had a great consumer base that were not only loyal but were giving referrals, so we got a lot of word of mouth, a lot of recognition for how we were handling the pandemic.”

He had advice for politicians.

“While it’s very popular to talk about expansion and growth, I think it’s more important to build stronger infrastructure,” said Robertson, who wasn’t talking about roads and bridges.

He has a background in e-sports and spent time in Europe, where he saw people getting a better education in e-commerce.

“Being able to be agile, whether from technology, business or education standpoint, that’s true growth,” he said, noting how the state’s unemployment websites had crashed. “Before you get to another situation like that, doing the due diligence and making sure we have an infrastructure that can support not only business but also perform in a crisis is a smart move.”

At least the state’s pandemic response does include an $85 million investment in broadband. When the whole state’s wired, maybe our legislators will deserve some macarons.

In a since-deleted tweet responding to a question about a potential contract extension for Kansas City Chiefs safety Tyrann Mathieu, Mathieu tweeted that he's "probably not" going to get a new deal in … END_OF_DOCUMENT_TOKEN_TO_BE_REPLACED

KANSAS CITY, Mo. — A manhole left uncovered is the source of concern after a woman damaged her car in Kansas City. The single-car crash happened at 11th Street and Tracy Avenue during the busy … END_OF_DOCUMENT_TOKEN_TO_BE_REPLACED

Kansas City, Missouri's COVID-19 emergency order was set to expire at the end of the month. But Mayor Quinton Lucas made it clear Friday that private businesses can still set their own rules.Any … END_OF_DOCUMENT_TOKEN_TO_BE_REPLACED

KANSAS CITY, MO (KCTV/AP) — All restrictions meant to slow the spread of the coronavirus were being rescinded as of midday Friday in Kansas City, Missouri, following guidance from the U.S. Centers for … END_OF_DOCUMENT_TOKEN_TO_BE_REPLACED