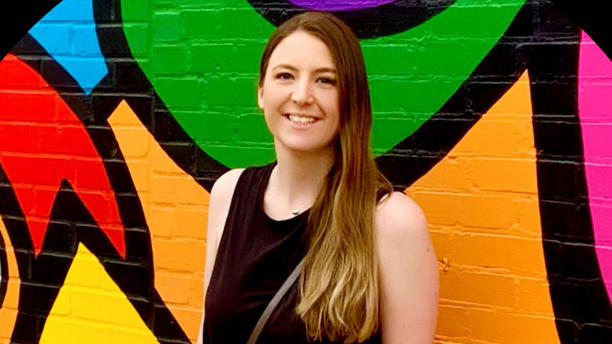 
Above image credit: Barney Graham and Katherine Calhoun are two scientists who worked first-hand on COVID-19 vaccines at the start of the pandemic. (Flatland)

This is an inside look at two scientists from the Kansas City area who worked on producing COVID-19 vaccines. One is a veteran researcher who worked during the AIDS epidemic and whose research is the foundation for mRNA vaccine production. The second is a young researcher whose career began with producing a vaccine during the COVID-19 pandemic. Here are their stories.

Barney Graham outside of Cellar Door Cafe in Lawrence, Kansas, to visit his sister and receive the honorary degree from the University of Kansas. (Vicky Diaz-Camacho | Flatland)

Graham’s grandfather lived through the Spanish Flu pandemic a century ago. Now, he’s battling COVID-19 to help ensure his own grandson survives another pandemic.

Graham, who is deputy director of the National Institutes of Health Vaccine Research Center in Bethesda, Maryland, said his path to becoming a pandemic fighter took several turns.

“I grew up in Kansas and my mother always said that the reason people from Kansas are more stable is that they can see the horizon. There’s nothing blocking their view,” he said. “It’s easier for them to understand their place.”

Graham, who was raised on a farm near Paola, Kansas, said his dentist father inspired his decision to work in the sciences. Ultimately, Graham traded Kansas farms for Maryland labs, years later creating one of the most essential medicines of the modern age.

His path to virology and vaccine research began with an infectious disease fellowship. A cardiologist at Vanderbilt University funded the fellowship, expanding the program from three to four slots to make room for Graham.

While there, he wanted more hands-on experience with virology and focused on the Respiratory Syncytial Virus, an illness commonly found in infants and children.

That’s when he realized virology was his calling in life. He would go on to work on the HIV vaccine in the late 1980s as a young resident intern at Vanderbilt University, a formative experience for his career.

“At that time, (HIV) didn’t have a name,” Graham said, explaining that he had admitted the first AIDS patient in Tennessee. “A lot of people my age have been working on HIV and AIDS for their whole career.”

After that, he worked on the Ebola vaccine in the mid 2000s. During that time, he and his team were focused on a DNA vaccine and one of the companies they’d been talking to just happened to be Moderna.

Graham was part of the 2007 Pandemic Influenza Preparedness Plan team, headed by Dr. Anthony Fauci, that focused on improving the “surge capacity for producing products that will be crucial during a pandemic, such as antivirals, diagnostic tests, personal protective equipment, and other medical equipment,” according to a Center for Infectious Disease Research and Policy news release.

These experiences, Graham explained, illuminated just how far pharmaceutical technology has come. His work with the pandemic preparedness team and decades of research helped make the Moderna shot available sooner.

Fast forward to the beginning of the COVID-19 pandemic.

By January 2020, Graham’s team had received word that a vaccine would be needed. By February, using the DNA vaccine research he’d worked on years prior, they created a vaccine that would be approved for Emergency Use Authorization.

The rest is history. But Graham wants folks to understand one thing.

“We just kept doing what we were already doing. That allowed us to get off to a fast start,” he said. “A whole army of people (worked) to get this done.”

These days, he reflects on his decades of work in virology and infectious diseases. His most recent accomplishments include an honorary degree from the University of Kansas and the Albert B. Sabin Gold Medal — the highest scientific award given by the Sabin Vaccine Institute.

“I’m trying to get my head around all that,” he said.

But he said the greatest satisfaction was getting the jab of his own concoction and, 16 months later, being able to be face-to-face again with family.

“I’m sitting outside at a restaurant and my face looks different than the last 16 months,” he added. “So I’m feeling pressure falling off and it’s wonderful to feel that relief.”

Early Career Starts with a Bang

Katherine Calhoun is an early career scientist who landed a job at Pfizer in 2019. Just a few months later she was part of the team working to create the COVID-19 vaccine. (LinkedIn Photo)

Katherine Calhoun recalled she was always into science.

“My (high school) senior year project, I was looking at some proteins as a potential source for improving biofuel yield,” Calhoun said. “So I knew I wanted to do something in that space.”

Calhoun, who grew up in Lenexa, shadowed people in the biochemistry department at the University of Kansas, soaking up everything she could as she washed dishes and helped around the lab.

She studied molecular biology and biochemistry at the University of Kansas Medical Center as part of her undergraduate education. More specifically, she focused on protein isolation and purification, according to her LinkedIn profile.

This work inspired what she does as an associate scientist focused on biochemical engineering at a Pfizer plant in the St. Louis area, where she’s been since the start of the pandemic. Calhoun said it is wild to think that what she works on every day dominates daily headlines.

Most recently, Calhoun was quoted in a front page story in The New York Times describing the step-by-step process behind creating Pfizer’s COVID-19 vaccine.

“Basically we make the DNA template,” Calhoun said. “We grow cells and you can code them essentially to produce proteins. And the protein we’re having them produce is a circular DNA plasmid that codes for the spike protein of the COVID-19 virus.”

This process is what goes into the mRNA vaccine that then teaches the body to recognize and fight off the COVID-19 virus.

Early on in the pandemic, Calhoun said life felt surreal. Her drive on empty streets to work an overnight shift was eerie. In the labs, she worked through the night with a team of about 15 other scientists. And what they were producing was something that would have a massive impact.

“We kind of all had to take on a lot of individual responsibility,” she said. “It’s quite unique having like this being, you know, the first couple of years of my career.”

So, Calhoun does what she can to break down the vaccine process so folks understand what they’re putting in their bodies. She recounted how the pandemic upended life for scientists and the scrutiny her work has faced.

“We’re aware that the stakes are really high,” she said. “It’s hard because you can get a little bit overwhelmed. … It’s like, every day that we don’t have the vaccine is a day that there’s like no possible treatment for COVID. Right? So certainly an immense amount of responsibility.”

One question she gets frequently is: What happens to the RNA once it’s in your body?

RNA degrades quickly, she explained. After that the RNA is then picked up, read and the information is transcribed in our cells.

“The human immune system is actually really amazing,” she said. “Once you tell the cells to recognize a certain genetic sequence, it can then on its own continue producing the antibody against COVID.

“What we’re doing is taking the virus out of the equation and allowing your body to learn how to produce the COVID-19 antibody without actually ever having to be infected.”

Calhoun said she thinks about the future of technologies like mRNA and what it’ll be 20 years from now. It’s clear she is passionate about the sciences and, in particular, sharing what people like her do at Pfizer.

The biggest takeaway from this past year is looking at where she began in high school and where she is today. Calhoun said she hopes to encourage and inspire the next young generation of scientists.

In a since-deleted tweet responding to a question about a potential contract extension for Kansas City Chiefs safety Tyrann Mathieu, Mathieu tweeted that he's "probably not" going to get a new deal in … END_OF_DOCUMENT_TOKEN_TO_BE_REPLACED

KANSAS CITY, Mo. — A manhole left uncovered is the source of concern after a woman damaged her car in Kansas City. The single-car crash happened at 11th Street and Tracy Avenue during the busy … END_OF_DOCUMENT_TOKEN_TO_BE_REPLACED

Kansas City, Missouri's COVID-19 emergency order was set to expire at the end of the month. But Mayor Quinton Lucas made it clear Friday that private businesses can still set their own rules.Any … END_OF_DOCUMENT_TOKEN_TO_BE_REPLACED

KANSAS CITY, MO (KCTV/AP) — All restrictions meant to slow the spread of the coronavirus were being rescinded as of midday Friday in Kansas City, Missouri, following guidance from the U.S. Centers for … END_OF_DOCUMENT_TOKEN_TO_BE_REPLACED