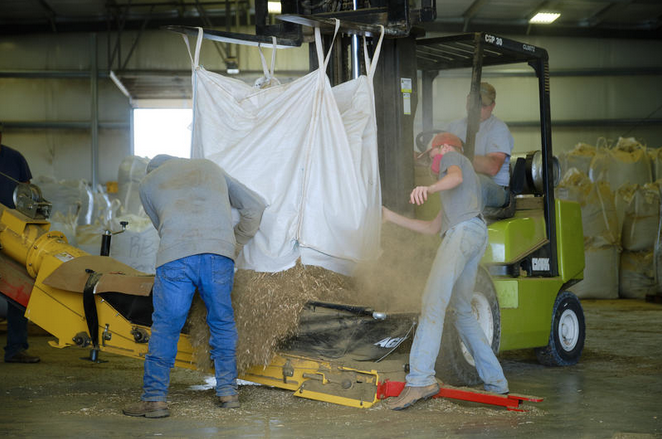 PRATT, Kansas — This summer marks the third year that Kansans have grown hemp for industrial uses.

Yet
growing the less sexy cousin of the plant associated with getting high
and some medicinal uses has proven riskier and more difficult than many
farmers initially expected.

Consequently, the number of licenses issued this year is less than half of what the state saw in 2020.

“There
were some misconceptions about the ease of marketability of it,” said
Braden Hoch, the state’s industrial hemp program supervisor.

The risk of any agricultural operation is compounded by an ever-changing set of state and federal rules. And now some hemp farmers and processors want more help from the government to reduce risk and encourage innovation.

Shining Star Hemp Co. is one of only 11 licensed hemp processors in the state.

Outside
of the industrial building near the Pratt municipal airport in
south-central Kansas where Shining Star operates sits rows of 1,200
pound bags full of industrial hemp stalks, grains and flowers.

Inside,
workers break open the bags and dump them onto a large conveyor belt
leading to a cacophony of machinery shaking, blowing and sifting the
biomass into its usable parts.

The operation is one of the few successful outfits in the state.

“It’s
been a lot of work, a lot of phone calls developing relationships and
finding synergies,” Jennifer Holmes, who works with Shining Star to develop and market products said. “But honestly, I can say at this point, we’re doing awesome for where we’re at.”

Paul McGeary masterminded Shining Star’s system for converting the hemp harvest into something industry can use.

“It’s about, probably, 30 years of beating your head against the wall, mostly,” he said.

McGeary
is a contractor for Shining Star. He’s worked in the agricultural
processing world for most of his life and has applied what he learned
over decades of sifting wheat and corn to develop this machine to sift
hemp.

He said the complexity of the process is part of what’s
holding the industry back. It just doesn’t have the scale to supply
manufacturers who would put the fiber to use.

“We were walking
into those meetings thinking that to have 30-to- 40,000 pounds on hand
is something. But when you walk into industry and they want five train
cars a day or a trainload a week, we just aren’t prepared for that,” he
said. “And getting them to wait until we’re prepared, that’s the
bottleneck of the whole thing.”

Hemp has been hyped as something
with a wide range of industrial uses. The stalk can be made into paper
or biodegradable plastics. The seeds can be made into food. And the
flowers can be pressed to extract oils.

But so far, the only
market the industry is pushing seems to be for its cannabinoid-rich, or
CBD, oil. And there’s a flood of CBD already on the market.

“We
don’t have the best of luck selling full-spectrum oil,” Holmes said.
“It’s just something that we all need to work through and do the right
thing and move into the grain and fiber industry.”

But that will take millions of dollars in investments in new equipment.

Until
that equipment can be designed, built or purchased, companies
interested in making products from hemp fibers are out of luck. A
company in Newton, Kansas, wants to make prosthetic limbs from hemp. It imports its processed hemp from overseas.

Holmes
wants more government help to offset some of the risk for investing in
converting the plant into something useful for industry.

“A lot
of people are scared to start because they don’t know if they’re going
to fail, so they don’t ever get started,” she said.

The Kansas Department of Agriculture says its hemp growing licenses dropped  from 218 in 2020, to only 81 this year.

And last year, of the almost 4,000 acres planted, only 761 were harvested for production.

An eighth of that had to be burned by the state because it contained too much of the psychoactive chemical THC.

“The
past two years have really helped individuals get up to speed,” Hoch
said. “But producers are really still determining the best way to grow
hemp as a crop and if it’s feasible to include in their rotation.”

He
said growers and processors need to expand beyond CBD products, but
with federal and state rules surrounding the crop in constant flux,
finding the right investors that can spur that kind of innovation and
development will remain challenging.

Brian Grimmett reports
on the environment, energy and natural resources for KMUW in Wichita and
the Kansas News Service. You can follow him on Twitter @briangrimmett or email him at [email protected]

In a since-deleted tweet responding to a question about a potential contract extension for Kansas City Chiefs safety Tyrann Mathieu, Mathieu tweeted that he's "probably not" going to get a new deal in … END_OF_DOCUMENT_TOKEN_TO_BE_REPLACED

KANSAS CITY, Mo. — A manhole left uncovered is the source of concern after a woman damaged her car in Kansas City. The single-car crash happened at 11th Street and Tracy Avenue during the busy … END_OF_DOCUMENT_TOKEN_TO_BE_REPLACED

Kansas City, Missouri's COVID-19 emergency order was set to expire at the end of the month. But Mayor Quinton Lucas made it clear Friday that private businesses can still set their own rules.Any … END_OF_DOCUMENT_TOKEN_TO_BE_REPLACED

KANSAS CITY, MO (KCTV/AP) — All restrictions meant to slow the spread of the coronavirus were being rescinded as of midday Friday in Kansas City, Missouri, following guidance from the U.S. Centers for … END_OF_DOCUMENT_TOKEN_TO_BE_REPLACED