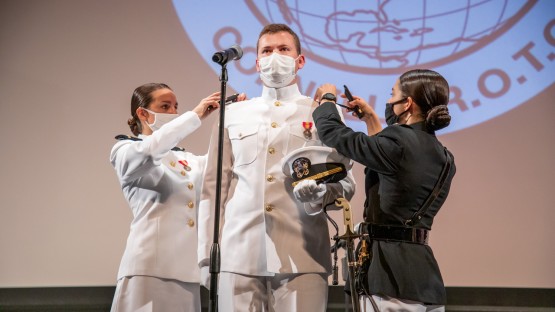 “Excuse me,” the veteran servicemember said, collecting himself. “Proud moment.”

Her own voice wavering at first, Megan Unrath repeated the oath of office from the auditorium stage, swearing to support and defend the Constitution. After her brother and a friend pinned rank bars on her shoulders, she exchanged a first salute with Sgt. 1st Class Neal Bonham to begin her career as an officer – first as a reservist attending medical school, and later as an active-duty Army doctor.

“It’s something I’ve been looking forward to for the last four years,” Unrath, of Kansas City, Missouri, said of the commissioning experience shared with her father. “It’s an emotional day.”

Unrath was one of 21 graduating Cornell seniors commissioned as Army, Air Force or Marine Corps second lieutenants or as Navy ensigns during the hybrid ceremony hosted in Bailey Hall and streamed to participants and viewers as far away as Japan.

Observing pandemic protocols, in-person attendees – including up to two guests per ROTC cadet or midshipman – wore masks and sat distanced throughout the performance hall. Some of the oaths and salutes were administered remotely through a large video screen above the stage.

In introductory remarks, Jack McSorley ’21 of Richmond, Virginia, outgoing commander of Cornell’s Tri-Service Brigade, said the pandemic had made his ROTC class better leaders. He cited Gen. George S. Patton’s saying that success is a measure of how high one bounces back after hitting bottom.

In Bailey Hall on May 28, U.S. Army 2nd Lt. Megan Unrath, center, had rank bars pinned on her shoulders by her brother, Tyler Unrath, and friend Kate Ryan ’21 during Cornell’s ROTC commissioning ceremony.

“Today, at the outset of our military service,” McSorley said, “let’s emerge stronger from all the challenges of this pandemic and these past four years and show the world just how high we can bounce.”

Offering a remote address, Rear Admiral Tom Williams ’92, director of plans, policy and integration in the Office of the Chief of Naval Operations, reviewed key values reflected in the oath of office and asked the future officers to serve with integrity and humility.

“I take great comfort and derive great hope from the fact that people of your caliber, intellect and character are joining others across the country today in taking this oath of office,” Williams said.

ROTC cadets and midshipmen were then called to the stage to take the oath in groups of up to four. After first salutes to enlisted advisors, the newly commissioned officers offered them (if present in person) a silver dollar as a symbol of the officer community’s gratitude and respect for enlisted personnel.

After a virtual salute from California, Gunnery Sgt. Robert Jones offered an “ooh-rah” to Aimé Freedenberg ’21, the lone commission into the Marine Corps. In a separate ceremony earlier that day, her father, a former Marine captain, administered the oath with other family members present.

“I knew that the Marine Corps was a great path for leadership development, and I also wanted to give back to my community,” Freedenberg, of Canton, Connecticut, said, of her reasons for choosing ROTC. “I hope to be a positive influence on the Marines that I’ll be leading.”

Freedenberg plans to report to The Basic School in Quantico, Virginia, in August.

Shane Lobo ’21 of Oldsmar, Florida, the lone Air Force commission from Cornell, said the ceremony culminated a four-year rollercoaster of emotions and hard work. He plans to join pilot training at Vance Air Force Base in Oklahoma and looks forward to practicing what he’s trained to do: “To lead your people and help them achieve their goals to be the best officer or enlisted person that they can be,” Lobo said. “And to actually start serving my country, that’ll be exciting.”

“On top of graduating from college, they’re also commissioning as leaders of America’s sons and daughters, and so now they have to go out and do that,” Roach said. “It’s a huge moment for them to become commissioned as officers, and they’ll remember it for the rest of their lives.”

Members of the Class of 2021 receiving commissions May 28 were:

In a since-deleted tweet responding to a question about a potential contract extension for Kansas City Chiefs safety Tyrann Mathieu, Mathieu tweeted that he's "probably not" going to get a new deal in … END_OF_DOCUMENT_TOKEN_TO_BE_REPLACED

KANSAS CITY, Mo. — A manhole left uncovered is the source of concern after a woman damaged her car in Kansas City. The single-car crash happened at 11th Street and Tracy Avenue during the busy … END_OF_DOCUMENT_TOKEN_TO_BE_REPLACED

Kansas City, Missouri's COVID-19 emergency order was set to expire at the end of the month. But Mayor Quinton Lucas made it clear Friday that private businesses can still set their own rules.Any … END_OF_DOCUMENT_TOKEN_TO_BE_REPLACED

KANSAS CITY, MO (KCTV/AP) — All restrictions meant to slow the spread of the coronavirus were being rescinded as of midday Friday in Kansas City, Missouri, following guidance from the U.S. Centers for … END_OF_DOCUMENT_TOKEN_TO_BE_REPLACED