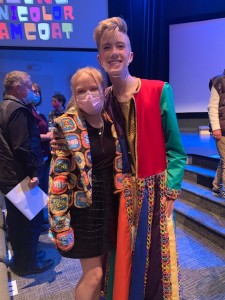 Sophie Abrey with her models on stage // Photo by Annie Wagar

While only 14, Sophie Abrey is on her way to becoming a being a fashion designer one day. Well. Actually, she’s already one.

Sophie’s love of fashion began when she was around seven or eight years old. Her mother, Tracy Abrey, says it was around that age Sophie wanted to learn how to sew. Tracy decided to search for a place for Sophie to learn how to sew and found a quilting shop in Overland Park where Sophie began participating in a group class.

It did not take long before Sophie was wanting to make her own clothes. She also wanted to know how to make a pattern so she could make unique styles instead of only sewing fabric together from a pattern. A friend of Tracy’s knew Jennifer Lapka at Rightfully Sewn and Lapka began giving Sophie private lessons.

“I always wanted clothes that weren’t in the shops and that we couldn’t find so that’s where I kind of wanted to make my own so then I can make the clothes I had in my head,” Sophie says.

Sophie’s brother has a heart condition and it gave her a lot of anxiety during the COVID-19 pandemic. She dealt with her fears by creating a playful and colorful collection to combat the darkness of the preceding months. This eight-look collection was showcased at her first fashion show on May 4 at her school Heritage Christian Academy in Olathe.

The resin jewelry showcased in the collection was made by Sophie as well. She discovered resin art on YouTube and asked for resin for Christmas. Tracy is fully on board with her daughter’s dream of being a fashion designer and will continue to do what she can to help her even though it could be considered risky.

Although Sophie’s first fashion show was earlier this month, this is not her first rodeo in terms of designing. She had the opportunity to design a coat for the Joseph and the Technicolor Dreamcoat school play after

the drama director was looking for someone to help make Joseph’s coat.

“As an adult, I think that’s pretty gutsy to trust a costume to a then 13-year-old,” Tracy says. “But Sophie made a beautiful coat for Joseph for the musical.”

Sophie was so excited about the opportunity to be able to showcase her skills. There is no doubt that Sophie has a bright future ahead and will have many more opportunities like this to come.

Below is a gallery of costume designs from Annie Wager:

In a since-deleted tweet responding to a question about a potential contract extension for Kansas City Chiefs safety Tyrann Mathieu, Mathieu tweeted that he's "probably not" going to get a new deal in … END_OF_DOCUMENT_TOKEN_TO_BE_REPLACED

KANSAS CITY, Mo. — A manhole left uncovered is the source of concern after a woman damaged her car in Kansas City. The single-car crash happened at 11th Street and Tracy Avenue during the busy … END_OF_DOCUMENT_TOKEN_TO_BE_REPLACED

Kansas City, Missouri's COVID-19 emergency order was set to expire at the end of the month. But Mayor Quinton Lucas made it clear Friday that private businesses can still set their own rules.Any … END_OF_DOCUMENT_TOKEN_TO_BE_REPLACED

KANSAS CITY, MO (KCTV/AP) — All restrictions meant to slow the spread of the coronavirus were being rescinded as of midday Friday in Kansas City, Missouri, following guidance from the U.S. Centers for … END_OF_DOCUMENT_TOKEN_TO_BE_REPLACED