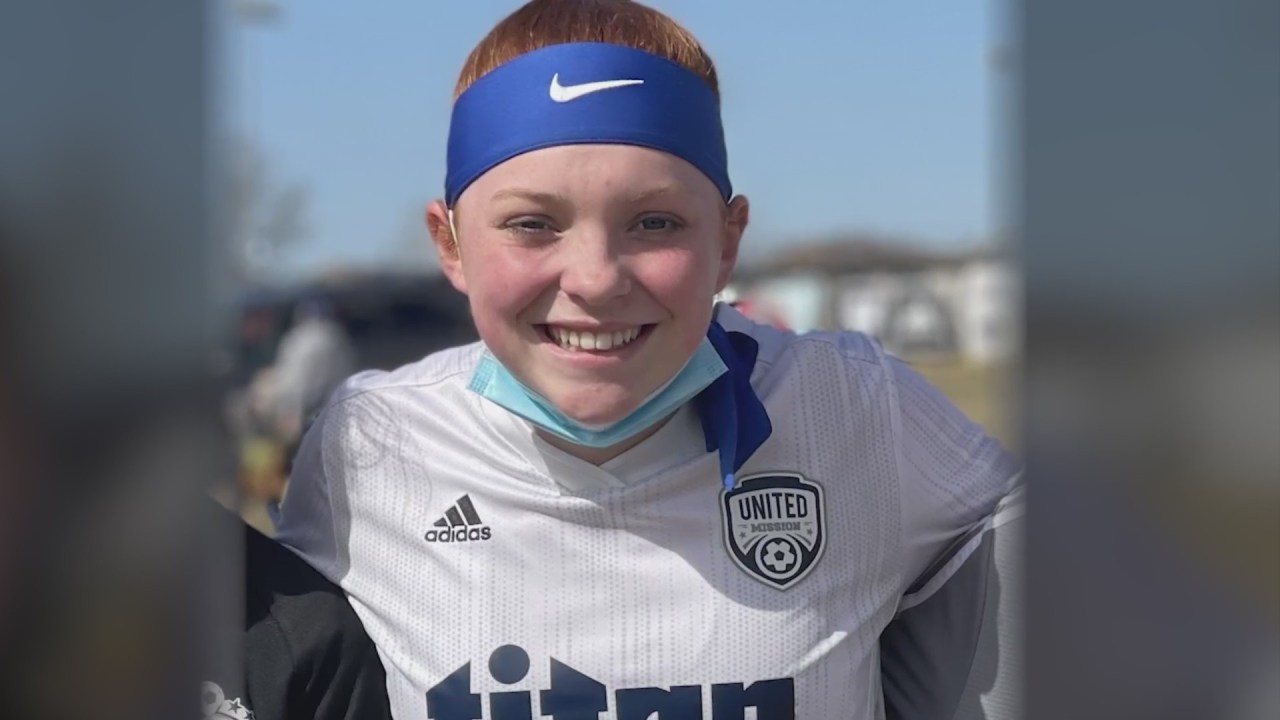 OLATHE, Kan. — FOX4 first told you about an Overland Park girl who is fighting a very serious infection that has already claimed part of her leg. The pre-teen athlete’s life will be forever changed, but her teammates are standing by her to help any way they can.

Twelve-year-old Brinley Hutson’s Mission United soccer teammates are proving it is more than a name. The girls are on a mission to unite the community in support of their friend. The girls have gotten together to make yard signs that will be placed throughout Overland Park and Olathe, in yards of people who know her and even those who don’t.

Some of the signs read #BrinleySTRONG, which her friends say is more than a slogan.

“On the soccer field, she’s the one who takes all the hits. She’s not afraid of the contact,” said teammate Maeve O’Rourke. “People will start coming at her and she’s the last one standing out of those battles usually.”

Hutson is facing her biggest battle yet, off the field. The end of may, the athletic standout was kicked in the leg during a soccer game and a few days later, hit by a softball in the exact same spot.

The bruise turned into a bump accompanied by a fever. Doctors at Children’s Mercy Hospital were forced to amputate part of her leg to stop a rare and aggressive strep infection from taking her life.

Hutson’s soccer teammates believe her fighting spirit help her and her kindness will, too.

“When she’s on the soccer field she’s like always pumping me up,” said teammate Grace Nelson. “If I mess up she always tells me, ‘You’re ok. You got this.’”

“You’re ok. You got this,” is the message Hutson’s teammates are sending back to her. Sporting the hashtags #BrinleySTRONG and #WinforBrin, which are Mission United’s the new team mottos.

These athletes who usually come together on the field with the common goal of winning a game, now coming together with the goal of helping their friend.

“Maybe not in every way, but I can help at least in some little way,” Nelson said.

These girls hope their friend feels the support and love while she is fighting to recover.

“It’s just best to have lots of friends and it’s good to know that people care about you,” O’Rourke said.

Brinley’s supporters have set up a GoFundMe page to help pay for therapy and prosthetics so she can once again join them on the field.

Not only is she a phenomenal soccer player, Brinley is also a star on the softball field and basketball court.

In a since-deleted tweet responding to a question about a potential contract extension for Kansas City Chiefs safety Tyrann Mathieu, Mathieu tweeted that he's "probably not" going to get a new deal in … END_OF_DOCUMENT_TOKEN_TO_BE_REPLACED

KANSAS CITY, Mo. — A manhole left uncovered is the source of concern after a woman damaged her car in Kansas City. The single-car crash happened at 11th Street and Tracy Avenue during the busy … END_OF_DOCUMENT_TOKEN_TO_BE_REPLACED

Kansas City, Missouri's COVID-19 emergency order was set to expire at the end of the month. But Mayor Quinton Lucas made it clear Friday that private businesses can still set their own rules.Any … END_OF_DOCUMENT_TOKEN_TO_BE_REPLACED

KANSAS CITY, MO (KCTV/AP) — All restrictions meant to slow the spread of the coronavirus were being rescinded as of midday Friday in Kansas City, Missouri, following guidance from the U.S. Centers for … END_OF_DOCUMENT_TOKEN_TO_BE_REPLACED