Above image credit: Burlington Road is the route recommended in a 2014 study that would bring the streetcar into the heart of North Kansas City. (Kevin Collison | CityScene KC))

The Kansas City Streetcar Authority is getting serious about extending the streetcar route across the Missouri River into North Kansas City, requesting proposals that would result in a solid plan by early 2022 providing details about its design and financing.

The agency has released a request for proposals that’s due later this month. It would use as a starting point the results of a NorthRail Streetcar Study completed in 2014.

That earlier report recommended an approximately two-mile extension that would cross the river on the Heart of America/Missouri 9 bridge and follow Burlington Road to a terminus in the heart of downtown North Kansas City at Armour Road.

“A lot has changed since 2014,” Tom Gerend, executive director of the Kansas City Streetcar Authority, said in a briefing to potential applicants this week.

“We now have an operational streetcar system. We have a city in North Kansas City with a change in elected leadership and has rapidly changed.

“It’s grown tremendously since 2014, with major development activity underway and pending that will continue to transform the City of North Kansas City into its own vibrant activity center, neighborhood and destination.”

The 2014 NorthRail Streetcar Study recommended adapting the Heart of America/Missouri 9 Bridge to bring the streetcar over the Missouri River to North Kansas City. (Illustration | NorthRail study)

The new study is being funded by the Streetcar Authority, KC Area Transportation Authority and the city of North Kansas City.

In recent years, North Kansas City, with a population of roughly 5,000, has capitalized on the revitalization occurring in downtown Kansas City, adding apartments and entertainment venues including microbreweries and the popular Chicken N Pickle.

As an example, a nine-story, 208-unit apartment project is currently going up near Burlington and Armour roads that would be one of the taller, if not the tallest, building in the mostly low-rise community.

North Kansas City political and civic leaders have considered an extension of the streetcar into their community as another step in their redevelopment vision. The 2014 study was conducted at the city’s request.

The estimated cost for retrofitting the Heart of America was $24.5 million, a project that would be funded separately from the potential streetcar extension. It would continue to be used for vehicular traffic and as a crossing for bicyclists and pedestrians.

“Moving the bike/pedestrian lane to the west side, and placing the streetcar on the east side was determined to offer the best balance of cost and operating flexibility,” according to the NorthRail study.

The 2014 report explored using either Swift Street or Burlington Road as the route for the streetcar. It ultimately recommended Burlington for the following reasons:

The estimated cost of building the Burlington streetcar route to Armour Road in the 2014 report was $56.6 million.

The NorthRail report stated that North Kansas City officials at the time had wanted a streetcar route that would extend to the city’s northern border at 32nd Avenue, but estimated the cost at approximately $134 million, “substantially exceeding local funding capacity.”

The mechanism to build and operate the recommended streetcar extension was creating a Transportation Development District (TDD), the same method used to build the downtown Kansas City streetcar line and now its extension on Main Street to the University of Missouri-Kansas City. 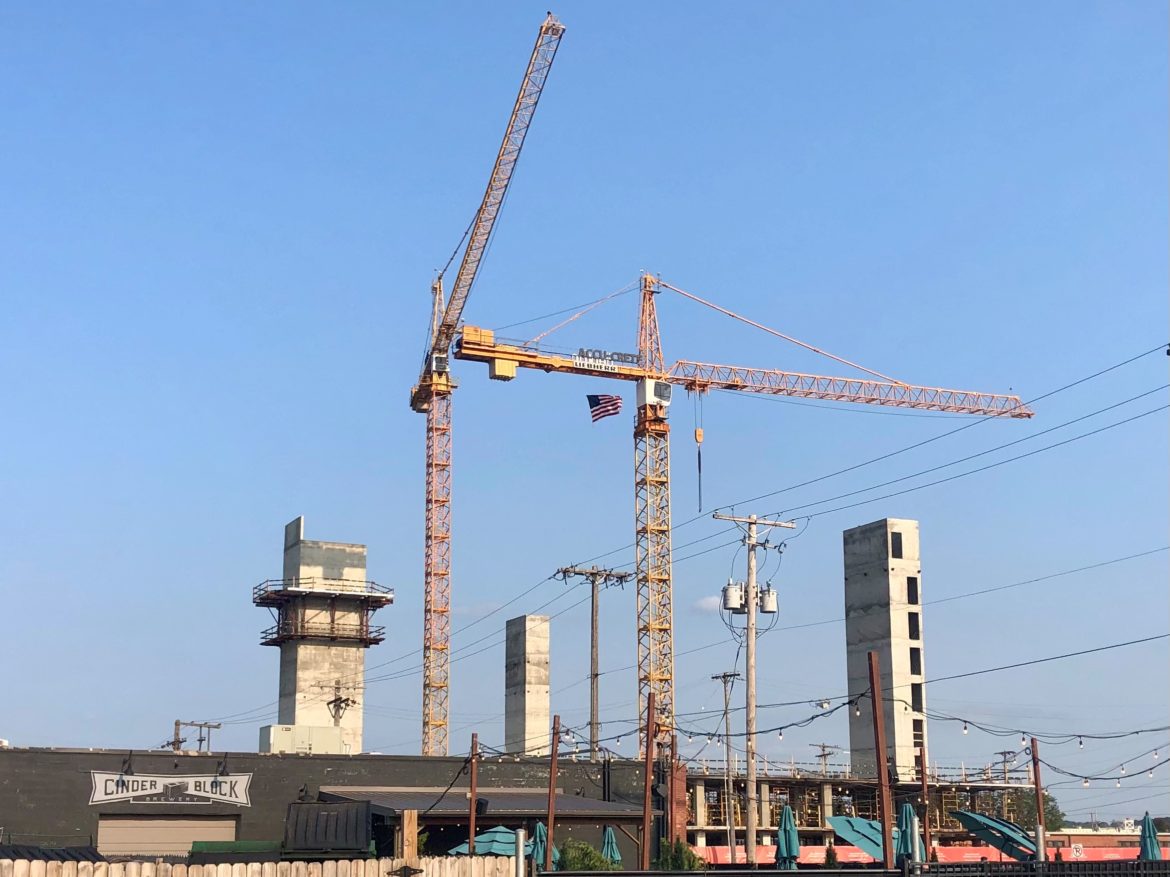 North Kansas City has experienced a boom in recent years. This nine-story apartment project is going up near where a streetcar route would potentially end near Armour Road and Burlington. (Kevin Collison | CityScene KC)

In the case of North Kansas City, the report stated the entire community would need to be included in the TDD. That would mean a property tax surcharge and additional sales tax would be imposed on all residents and businesses.

The NorthRail study assumed a 1% sales tax and a property tax, similar to the Kansas City TDD, that varied by commercial and residential uses.

In Kansas City, the boundaries of the current streetcar TDD run approximately one-third mile on each side of the line because of the greater property values and sales generated within its boundaries.

“It was formed to correspond to streetcar access/benefit (those who benefit pay) and many of the properties included were low-value surface lots, etc.,” Gerend said in an email.

Gerend said the new request for proposals to re-evaluate and refine a plan for extending the line to North Kansas City would “advance a path forward” to make the North Kansas City route the third extension of the basic system that began operations in May 2016.

“We once again have the opportunity to lay the ground work for evaluating what is feasible and what is possible,” Gerend said.

“The goal at the end of this effort is coming up with an identified, feasible concept that meets the needs and expectations of the city of North Kansas City.”

Flatland contributor Kevin Collison is the founder of CityScene KC, an online source for downtown news and issues.

Power Kansas City journalists to tell stories you love, about the community you love. Donate to Flatland.

In a since-deleted tweet responding to a question about a potential contract extension for Kansas City Chiefs safety Tyrann Mathieu, Mathieu tweeted that he's "probably not" going to get a new deal in … END_OF_DOCUMENT_TOKEN_TO_BE_REPLACED

KANSAS CITY, Mo. — A manhole left uncovered is the source of concern after a woman damaged her car in Kansas City. The single-car crash happened at 11th Street and Tracy Avenue during the busy … END_OF_DOCUMENT_TOKEN_TO_BE_REPLACED

Kansas City, Missouri's COVID-19 emergency order was set to expire at the end of the month. But Mayor Quinton Lucas made it clear Friday that private businesses can still set their own rules.Any … END_OF_DOCUMENT_TOKEN_TO_BE_REPLACED

KANSAS CITY, MO (KCTV/AP) — All restrictions meant to slow the spread of the coronavirus were being rescinded as of midday Friday in Kansas City, Missouri, following guidance from the U.S. Centers for … END_OF_DOCUMENT_TOKEN_TO_BE_REPLACED