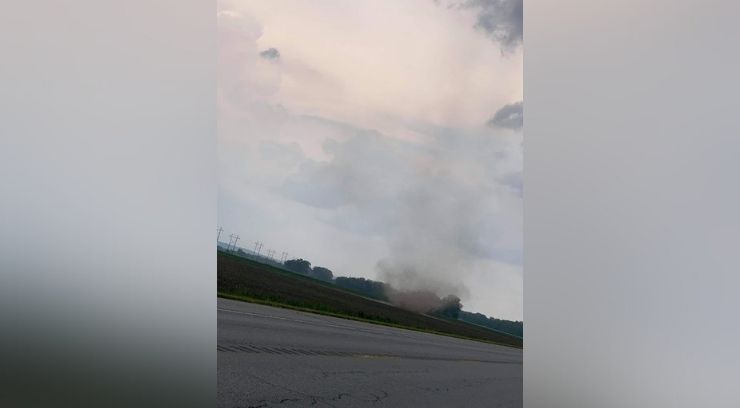 The storm brought 70 mph wind gusts and quarter-size hail to some areas. In others, it poured rain and caused flash flooding.

The video above is from the area where Interstate 35 south meets Interstate 435 east. You can see how much water the highway is holding.

The hail quickly followed for some communities, and there were reports of downed power lines and trees in many areas up north.

As the storm moved into the metro, it also produced a landspout between Missouri City and Orrick in Missouri.

A landspout is different than a typical supercell tornado. With a landspout, there’s no rotating updraft; the spinning motion originates near the ground. FOX4’s Joe Lauria explains more in the video above.

No damage was reported from the landspout. FOX4 viewers shared photos and videos of it on social media.

Most of the area will be dry by this evening, closer to sunset, and the storms will cool things off considerably as well.

In a since-deleted tweet responding to a question about a potential contract extension for Kansas City Chiefs safety Tyrann Mathieu, Mathieu tweeted that he's "probably not" going to get a new deal in … END_OF_DOCUMENT_TOKEN_TO_BE_REPLACED

KANSAS CITY, Mo. — A manhole left uncovered is the source of concern after a woman damaged her car in Kansas City. The single-car crash happened at 11th Street and Tracy Avenue during the busy … END_OF_DOCUMENT_TOKEN_TO_BE_REPLACED

Kansas City, Missouri's COVID-19 emergency order was set to expire at the end of the month. But Mayor Quinton Lucas made it clear Friday that private businesses can still set their own rules.Any … END_OF_DOCUMENT_TOKEN_TO_BE_REPLACED

KANSAS CITY, MO (KCTV/AP) — All restrictions meant to slow the spread of the coronavirus were being rescinded as of midday Friday in Kansas City, Missouri, following guidance from the U.S. Centers for … END_OF_DOCUMENT_TOKEN_TO_BE_REPLACED