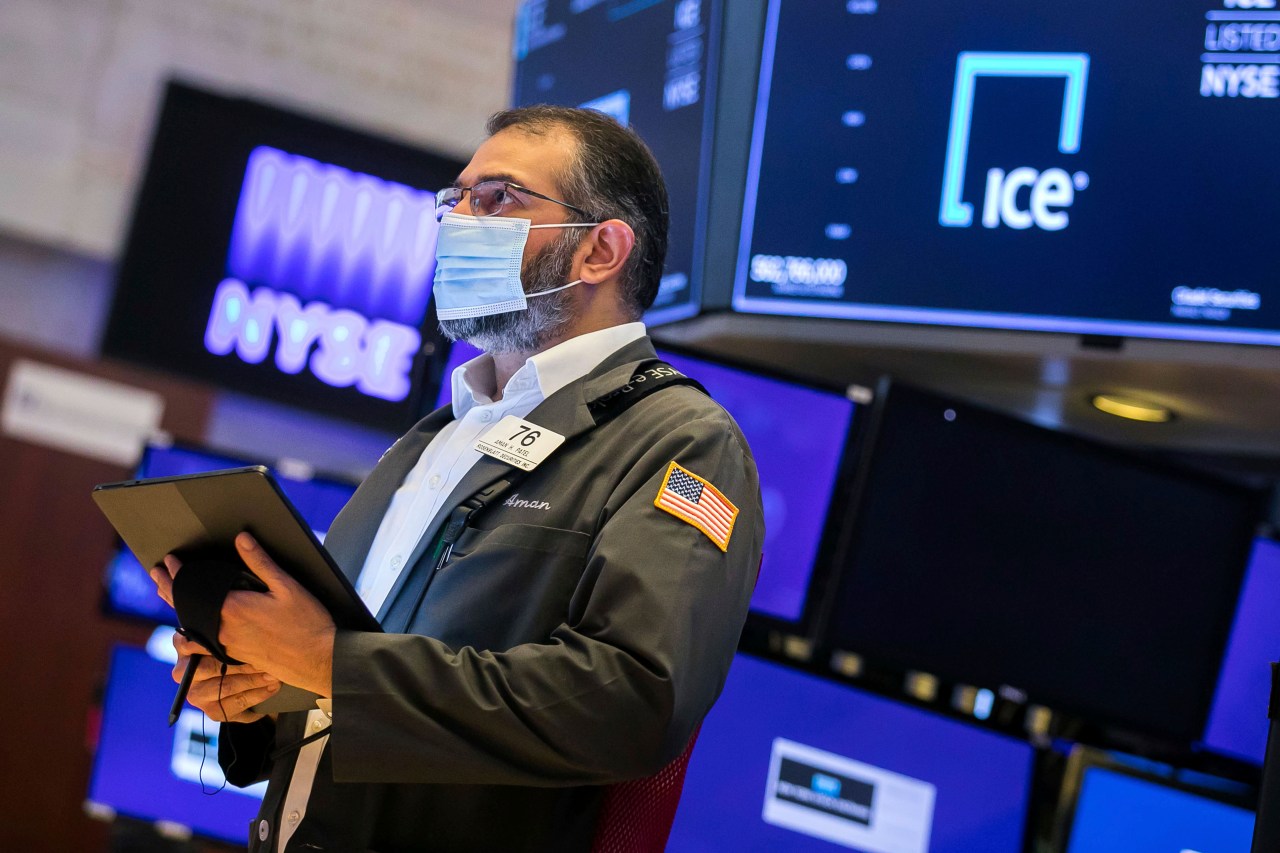 NEW YORK (AP) — Stocks are falling sharply Monday as worries sweep from Wall Street to Sydney that the worsening pandemic in hotspots around the world will derail what’s been a strong economic recovery.

The S&P 500 was 1.9% lower in morning trading, after setting a record high just a week earlier. In another sign of worry, the yield on the 10-year Treasury dropped close to its lowest level in five months. It sank below 1.20% as investors scrambled for safer places to put their money.

Airlines, hotels and stocks of other companies that would get hurt the most by potential COVID-19 restrictions were taking some of the heaviest losses, similar to the early days of the pandemic in February and March 2020. Mall owner Simon Property Group tumbled 7.8%, and cruise operator Carnival lost 7.5%.

The drop also circled the world, with several European markets down nearly 3%, on worries new, more infectious variants of the virus are dragging particularly hard on economies where vaccination rates are low. The price of benchmark U.S. crude, meanwhile, sank more than 5% after OPEC and allied nations agreed on Sunday to eventually allow for higher oil production this year.

Experts are saying Indonesia has become a new epicenter for the pandemic as outbreaks worsen across Southeast Asia. Meanwhile, Kansas City-area gymnast Kera Eaker and other athletes have tested positive for COVID at Tokyo’s Olympic Village, with the Games due to open Friday.

“The more transmissible delta variant is delaying the recovery for the ASEAN economies and pushing them further into the doldrums,” said Venkateswaran Lavanya, at Mizuho Bank in Singapore.

Vaccinations, masks, other guidance recommended for Johnson County schools ahead of 2021-2022 academic year

Even though vaccination rates are higher in the United States and some other developed economies, the tightly connected global economy means hits anywhere can quickly affect others on the other side of the world.

In Japan, the world’s third-largest economy, the vaccine rollout came later than in other developed nations and has stagnated lately. Japan is totally dependent so far on imported vaccines, and just one in five Japanese have been fully vaccinated.

Financial markets have been showing signs of increased concerns for a while, but the U.S. stock market had remained largely resilient. The S&P 500 has had just two down weeks in the last eight.

The bond market has been louder in its warnings, though. The yield on the 10-year Treasury tends to move with expectations for economic growth and for inflation, and it has been sinking from a perch of roughly 1.75% in March. It was at 1.19% Monday morning, down from 1.29% late Friday.

Analysts and professional investors say a long list of reasons is potentially behind the sharp moves in the bond market, which is seen as more rational and sober than the stock market. But at the heart is the risk the economy may be set to slow sharply from its current, extremely high growth.

Besides the new variants of the coronavirus, other risks to the economy include fading pandemic relief efforts from the U.S. government and a Federal Reserve that looks set to begin paring back its assistance for markets later this year.

Worries about a possible sharp slowdown have particularly hurt stocks whose profits are most closely tied to the strength of the economy. Stocks of smaller companies, for example, have been scuffling since hitting a peak in March even though many reports on the economy still show it’s growing at a very healthy rate.

The selling pressure was widespread, with more than 90% of the stocks in the S&P 500 lower. Even Big Tech stocks were falling, with Apple down 3.1% and Mircrosoft 1.5% lower. During earlier hiccups for the stock market, investors would often big up such stocks further on expectations they will continue to grow almost regardless of the economy’s strength.

Among the few gainers on Wall Street were potential winners of a return to a stay-at-home economy. Clorox rose 1.2%, and Campbell Soup gained 1%.

In a since-deleted tweet responding to a question about a potential contract extension for Kansas City Chiefs safety Tyrann Mathieu, Mathieu tweeted that he's "probably not" going to get a new deal in … END_OF_DOCUMENT_TOKEN_TO_BE_REPLACED

KANSAS CITY, Mo. — A manhole left uncovered is the source of concern after a woman damaged her car in Kansas City. The single-car crash happened at 11th Street and Tracy Avenue during the busy … END_OF_DOCUMENT_TOKEN_TO_BE_REPLACED

Kansas City, Missouri's COVID-19 emergency order was set to expire at the end of the month. But Mayor Quinton Lucas made it clear Friday that private businesses can still set their own rules.Any … END_OF_DOCUMENT_TOKEN_TO_BE_REPLACED

KANSAS CITY, MO (KCTV/AP) — All restrictions meant to slow the spread of the coronavirus were being rescinded as of midday Friday in Kansas City, Missouri, following guidance from the U.S. Centers for … END_OF_DOCUMENT_TOKEN_TO_BE_REPLACED