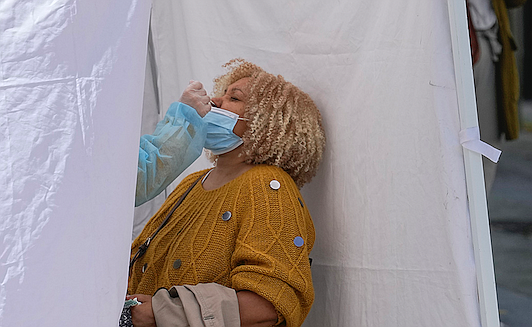 Representatives for Pfizer met privately with senior U.S. scientists and regulators Monday to press their case for swift authorization of coronavirus booster vaccines, amid growing public confusion about whether they will be needed and pushback from federal health officials who say the extra doses are not necessary now.

The high-level virtual meeting, which lasted an hour and involved Pfizer’s chief scientific officer briefing nearly every top doctor in the federal government, was held the same day Israel started administering third doses of the Pfizer-BioNTech vaccine to heart transplant patients and others with compromised immune systems.

U.S. officials said after the meeting that more data — and possibly several more months — would be needed before regulators could determine whether booster shots were necessary.

[Video not showing up above? Click here to watch » https://www.youtube.com/watch?v=kB2EsfUmrVM]

The developments underscored the intensifying debate about whether booster shots are needed. Many American experts, including Dr. Anthony Fauci, President Joe Biden’s chief medical adviser for the pandemic, have said there isn’t enough evidence that boosters are necessary. Some, though, say Israel’s move may foreshadow a government decision to at least recommend them for vulnerable people.

Pfizer is gathering information on antibody responses in those who receive a third dose, as well as data from Israel. It expects to submit at least some of that to the Food and Drug Administration in the coming weeks in a formal request to broaden the emergency authorization for its vaccine.

But the final decision on booster shots, several officials said after the meeting, will also depend on real-world information gathered by the Centers for Disease Control and Prevention about breakthrough infections — those occurring in vaccinated people — that cause serious disease or hospitalization.

And then there is the question of what kind of booster: a third dose of the original vaccine, or perhaps a shot tailored to the highly infectious delta variant, which is surging in the United States.

“It was an interesting meeting. They shared their data. There wasn’t anything resembling a decision,” Fauci said in an interview Monday evening, adding, “This is just one piece of a much bigger puzzle, and it’s one part of the data, so there isn’t a question of a convincing case one way or the other.”

Amy Rose, a Pfizer spokesperson, said in a statement, “We had a productive meeting with U.S. public health officials on the elements of our research program and the preliminary booster data.”

The Department of Health and Human Services, which convened the meeting, issued a statement reiterating the administration’s stance. “At this time, fully vaccinated Americans do not need a booster shot,” it said.

With less than half of the United States population fully vaccinated, some experts said Monday that the country needed to remain focused on getting all Americans their first dose. The FDA’s most important task, they said, is to increase public confidence by granting full approval to the vaccines in use, which for now are authorized on an emergency basis.

“At this point, the most important booster we need is to get people vaccinated,” said Dr. Carlos del Rio, an infectious disease expert at Emory University in Atlanta. The booster doses in Israel, he added, “will help us answer some questions, but at the end of the day, I don’t agree with what they’re doing. I think it’s awfully premature.”

Within the Biden administration, some officials fear that if Americans are convinced that vaccines provide only short-lived immunity before requiring a booster, then they will be even less likely to accept a shot. But those concerns could fall by the wayside if the data from Israel, expected in the next several weeks, shows conclusively that immunity wanes after six to eight months, significantly raising the risks for older people or other vulnerable populations.

The administration convened Monday’s session in response to last week’s announcement by Pfizer and its German partner, BioNTech, that they were developing a version of their vaccine that targets the delta variant. They are reported promising results from studies of people who received a third dose of the original vaccine six months after the second.

The new data is not yet published or peer-reviewed, but when the companies announced that they would submit data to the FDA for authorization of booster shots, it caught the White House by surprise.

In an unusual joint statement, the FDA and CDC pushed back.

“Americans who have been fully vaccinated do not need a booster shot at this time,” the statement said, adding, “We are prepared for booster doses if and when the science demonstrates that they are needed.”

Meanwhile, the FDA on Monday announced a new warning for the Johnson & Johnson vaccine, saying the shot has been linked to a serious but rare side effect called Guillain-Barre syndrome, in which the immune system attacks the nerves.

About 100 preliminary reports of Guillain-Barre have been detected after the administration of 12.8 million doses of the Johnson & Johnson vaccine in the United States, according to a companion statement from the CDC, which monitors vaccine safety systems with the FDA.

Of these reports, 95 were serious and required hospitalization, the FDA statement said. There was one death. Neither agency provided details about the death.

The cases have largely been reported about two weeks after vaccination and mostly in men, many 50 and older, according to the CDC. Most people fully recover from Guillain-Barre.

The warning on the Johnson & Johnson vaccine will be the latest blow to a shot that had been eagerly anticipated because of its ease of use — it requires only a single dose, which makes it especially helpful in immunizing harder-to-reach populations and regions. But the vaccine has been plagued by problems, including stumbles at its U.S. manufacturing plant.

The latest development comes at an especially fraught moment, as the highly transmissible delta variant sweeps the country and fuels an increase in coronavirus cases in many states. And the new warning could complicate the Biden administration’s efforts to ramp up inoculations in areas where skepticism regarding coronavirus vaccines remains high and the vaccine rate is low.

Available data does not show a pattern suggesting a similar increased risk of Guillain-Barre with the Pfizer-BioNTech and Moderna vaccines. More than 321 million doses of those vaccines — developed with a technology different from what is used to make the Johnson & Johnson vaccine — have been administered in the United States.

The Guillain-Barre cases are expected to be discussed at an upcoming meeting of the CDC’s Advisory Committee on Immunization Practices, the agency said.

Although the available evidence suggests an association between the Johnson & Johnson vaccine and increased risk of Guillain-Barre, “it is insufficient to establish a causal relationship,” the FDA said.

Guillain-Barre syndrome usually occurs at a rate of about 60 to 120 cases each week, according to CDC data. While the cause is not fully understood, it often follows infection with a virus, including influenza, or bacteria. Each year in the United States, an estimated 3,000 to 6,000 people develop the illness.

People older than 50 are at greatest risk. About two-thirds of people who develop the syndrome experience symptoms several days or weeks after they have fallen ill with diarrhea or a lung or sinus illness.

In Springfield, Mo., meanwhile, a hospital has opened its sixth covid-19 ward as the delta variant rages in the state’s southwest, and St. Louis County and Kansas City health officials also are warning about a sharp increase in cases.

Mercy Hospital in Springfield announced Sunday that it had opened another ward, after needing only five at the height of the pandemic last year, the Kansas City Star reported.

“Many local rural communities don’t have high vaccination rates,” Frederick wrote. “They also don’t have a hospital. Get sick, come to Springfield. I think that’s getting left out of the narrative.”

On Monday, the St. Louis County Health Department issued a public health advisory after a 63% increase — 1,461 cases — in the past two weeks. The county is averaging 100 new cases per day, St. Louis Public Radio reported.

County Executive Sam Page attributed the rise to the delta variant. He predicted an increase in hospitalizations and deaths in the coming weeks and urged residents to get vaccinated.

In the Kansas City area, doctors at the University of Kansas Health System said health officials need to begin considering measures to respond to a rise in cases in the metro area, the Kansas City Star reported.

Dr. Steve Stites, chief medical officer at the health system, didn’t suggest requiring masks in indoor spaces again but said it could become a possibility because of the large number of people who aren’t vaccinated in the region, combined with people socializing more often.

The city of Independence issued a public health advisory Friday in response to increasing cases.

Information for this article was contributed by Sheryl Gay Stolberg and Sharon LaFraniere of The New York Times; by Laurie McGinley and Lena H. Sun of The Washington Post; and by staff members of The Associated Press.

In a since-deleted tweet responding to a question about a potential contract extension for Kansas City Chiefs safety Tyrann Mathieu, Mathieu tweeted that he's "probably not" going to get a new deal in … END_OF_DOCUMENT_TOKEN_TO_BE_REPLACED

KANSAS CITY, Mo. — A manhole left uncovered is the source of concern after a woman damaged her car in Kansas City. The single-car crash happened at 11th Street and Tracy Avenue during the busy … END_OF_DOCUMENT_TOKEN_TO_BE_REPLACED

Kansas City, Missouri's COVID-19 emergency order was set to expire at the end of the month. But Mayor Quinton Lucas made it clear Friday that private businesses can still set their own rules.Any … END_OF_DOCUMENT_TOKEN_TO_BE_REPLACED

KANSAS CITY, MO (KCTV/AP) — All restrictions meant to slow the spread of the coronavirus were being rescinded as of midday Friday in Kansas City, Missouri, following guidance from the U.S. Centers for … END_OF_DOCUMENT_TOKEN_TO_BE_REPLACED