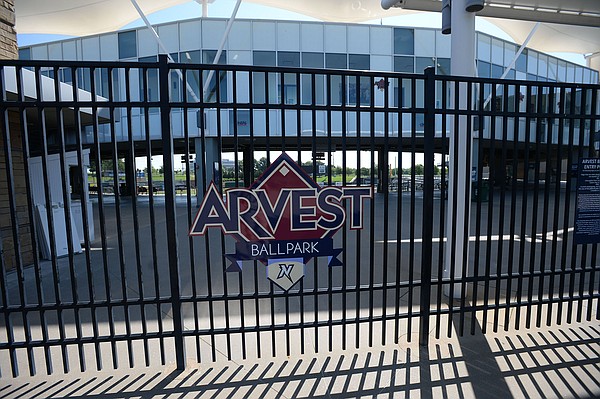 SPRINGDALE — The Public Facilities Board on Tuesday tabled a vote to fund $48,000 in upgrades for Arvest Ballpark.

Justin Cole, general manager of the Northwest Arkansas Naturals, presented bids to the commission for building a women’s locker room at the baseball stadium.

The Naturals, the AA minor league affiliate of the Kansas City Royals, play in Arvest Ballpark. The Public Facilities Board oversees the ballpark and other industrial properties for the city.

Cole explained Major League Baseball requires upgrades to stadiums across the organization by 2025. Other upgrades for Arvest will include an improved locker room for visiting teams and improvements to the playing field, with the major projects spread over the three-year timeline, he said.

Cole said the women’s locker room would serve women who are trainers, umpires and coaches from both teams. The Naturals have a female nutritionist and a few other support staff, he said.

Commission member Brent Hanby suggested the board ask Rich Entertainment Group, which owns the Naturals, to pay half of the cost for renovations.

Rich of Buffalo, N.Y., owns the Naturals, two other baseball teams and 12 other entertainment-related businesses across the nation. Representatives of the company couldn’t be reached by phone this week.

Cole said the delayed decision might leave him and his staff in a time crunch for getting the work done. The ballpark starts hosting other events in March, and that’s when the players arrive, he said.

Rent paid by the baseball team goes into an account to pay for maintenance and capital improvements at the stadium, he explained.

The city built Arvest Ballpark with voter approval of a bond in 2006, Morgan said.

City attorney Ernest Cate said the city’s lease with the Naturals says the city’s responsibilities are limited to regular maintenance and upgrades.

“I think we should do this,” said Jim Crouch, chairman of the Public Facilities Board. “The team has been great stewards of our ballpark. You’ve kept the facility like we’d want it to be and saved us money by being efficient.”

“If it’s what we must have at the ballpark to have a team, we’ll do it,” said board member Don Gibson.

Crouch noted the team has helped the board with other capital projects. For example, when the board’s money for building the ballpark was depleted, the team built many of the concession facilities.

The locker room will be built in a 500-square-foot room previously used for storage for on-field games with the audience, Cole said. More recently, it was used as a covid-19 staging locker room, and women used a family restroom area.

In a since-deleted tweet responding to a question about a potential contract extension for Kansas City Chiefs safety Tyrann Mathieu, Mathieu tweeted that he's "probably not" going to get a new deal in … END_OF_DOCUMENT_TOKEN_TO_BE_REPLACED

KANSAS CITY, Mo. — A manhole left uncovered is the source of concern after a woman damaged her car in Kansas City. The single-car crash happened at 11th Street and Tracy Avenue during the busy … END_OF_DOCUMENT_TOKEN_TO_BE_REPLACED

Kansas City, Missouri's COVID-19 emergency order was set to expire at the end of the month. But Mayor Quinton Lucas made it clear Friday that private businesses can still set their own rules.Any … END_OF_DOCUMENT_TOKEN_TO_BE_REPLACED

KANSAS CITY, MO (KCTV/AP) — All restrictions meant to slow the spread of the coronavirus were being rescinded as of midday Friday in Kansas City, Missouri, following guidance from the U.S. Centers for … END_OF_DOCUMENT_TOKEN_TO_BE_REPLACED