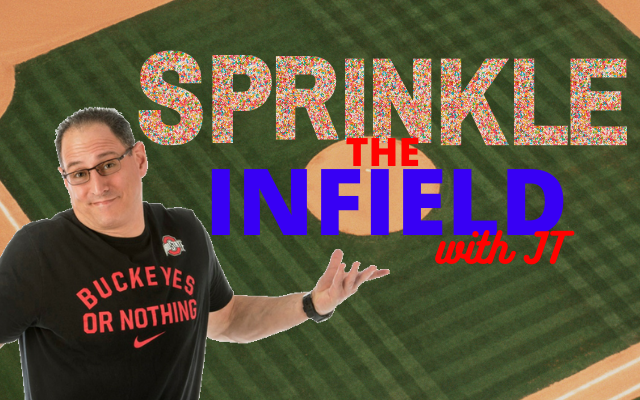 JT with the lighter side of sports and entertainment news. follow JT on Insta: @thejtturk

Tristan Thompson and Khloé Kardashian have gone their separate ways again. Apparently it happened a few weeks ago. He was allegedly grabbing some girl’s butt at a birthday party in Bel-Air. He then reportedly disappeared into a bedroom with her and two of her friends and another guy. When he emerged 30 minutes later, he was described as “disheveled.”

That incident happened the day after he and Khloé were photographed with their daughter, True, for the first time in two months.

Meanwhile, Alex Rodriguez was recently spotted with Ben Affleck’s ex-girlfriend Lindsay Shookus at her birthday in the Hampton’s. Apparently, she and A-Rod have been friends for 15 years. Or he’s just trying to get back at Bennifer 2.0.

There’s reportedly been a lot of 911 calls being made by people falling asleep with their Apple Watches on. Apparently when the side button is pressed or in this case fallen asleep on, the watch alerts emergency responders. In Overland Park, Kansas, 911 operators say they’re getting around 250 each hour, from people who were asleep when the calls were made.

247 Sports recently evaluated the eight teams in college football that have enjoyed the most success against ranked opponents since the 2010 season. Ohio State was high on that list, posting the second-best winning percentage against Top 25 competition in that window. Alabama was the No. 1 team.

Ohio State has posted a .780 winning percentage against ranked opponents, compiling a record of 39-11. During the 2020 season, the Buckeyes went 4-1 against Top 25 squads, with the lone loss coming to the Crimson Tide in the National Championship Game.

George Kittle is one of the NFL’s best tight ends, but from Wednesday to Friday of this week, he is hosting “Tight End University” (TE U), a three-day retreat, so his fellow NFL tight ends can hone their craft and bond with one another. Saying, “I’m always big on building a brotherhood,” the San Francisco 49ers tight end said. “A lot of these guys either don’t know each other or never communicated with each other. It bothers me.” The list of attendees includes Kittle, Travis Kelce, Greg Olsen, Zach Ertz, The Brown’s  Austin Hooper and many more. This is Year One of what Kittle hopes will be an annual event. Not invited, Tim Tebow.

Kevin Love is joining the 12 man roster and will play for team USA in the upcoming Olympic Games. Not sure which is the safer bet, Team USA wins Gold? Or, Kevin Love gets injured in the Olympics?

Phoenix is a 4.5 favorite

Chris Paul and Kawhi Leonard are both out

2001 – The Braves trade John Rocker and minor league third baseman Troy Cameron to the Indians in a four-player deal in return for St:eve Karsay, Steve Reed, and cash.

In a since-deleted tweet responding to a question about a potential contract extension for Kansas City Chiefs safety Tyrann Mathieu, Mathieu tweeted that he's "probably not" going to get a new deal in … END_OF_DOCUMENT_TOKEN_TO_BE_REPLACED

KANSAS CITY, Mo. — A manhole left uncovered is the source of concern after a woman damaged her car in Kansas City. The single-car crash happened at 11th Street and Tracy Avenue during the busy … END_OF_DOCUMENT_TOKEN_TO_BE_REPLACED

Kansas City, Missouri's COVID-19 emergency order was set to expire at the end of the month. But Mayor Quinton Lucas made it clear Friday that private businesses can still set their own rules.Any … END_OF_DOCUMENT_TOKEN_TO_BE_REPLACED

KANSAS CITY, MO (KCTV/AP) — All restrictions meant to slow the spread of the coronavirus were being rescinded as of midday Friday in Kansas City, Missouri, following guidance from the U.S. Centers for … END_OF_DOCUMENT_TOKEN_TO_BE_REPLACED