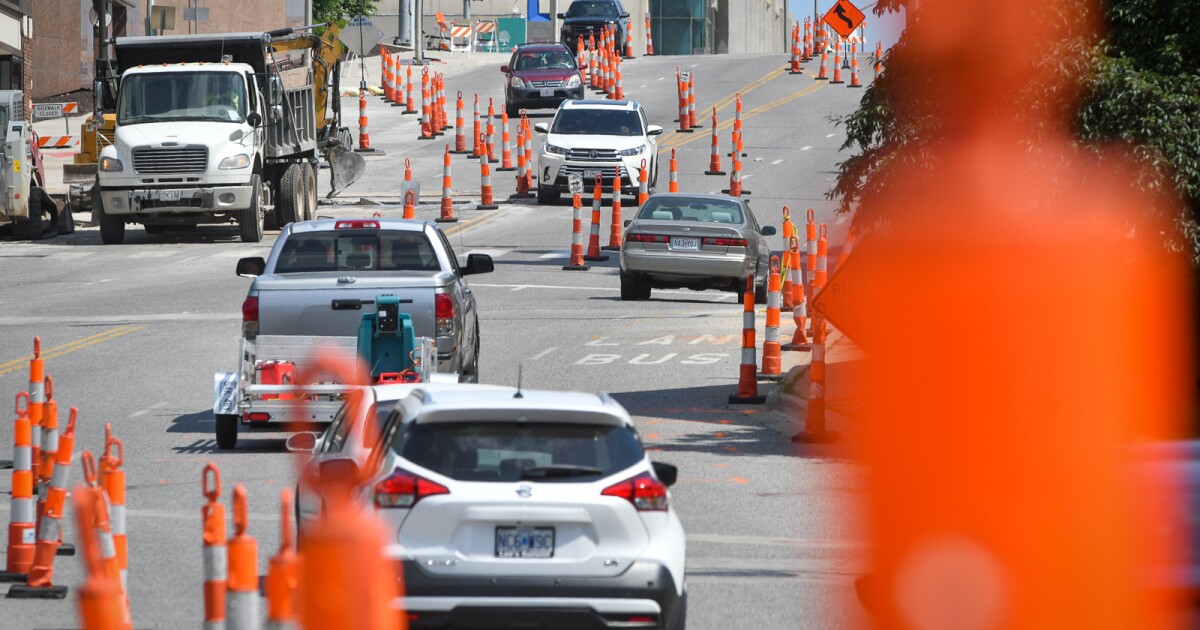 Chris Youngers, one of the owners of Café Trio on Main Street, says the endless construction is more than frustrating—it’s disillusioning.

“I do understand the complexity of this project,” Youngers says. “It’s not just the streetcar. They’re obviously replacing all of these utilities that have been hodge-podged together for the last hundred years. But to say it’s disruptive, it certainly is.”

The obvious reason for this construction is the expansion of the KC Streetcar from Union Station to the Plaza. But a bigger culprit lies beneath those 3.6 miles of road: the city’s sewer and water lines, plus utilities that belong to 15 different private companies, all of which need to be upgraded or repaired.

That’s not to mention the fire hydrants and manhole covers that need replacing or updating.

According to Maggie Green, spokeswoman for KCMO Public Works, that street construction represents a coordinated effort between KC Streetcar, the private companies and the city’s Water Department.

“It can be frustrating,” Green says. “But at the same time, it’s a good thing. People are working and there’s investment in infrastructure.”

Traffic at the intersection of Main Street and Emanuel Cleaver II navigates the cones and detour signs that are confusing and frustrating many drivers.

Alex Miller, with Upgrades on Main, said half of what drivers see is that private utility work and the water and sewer main upgrades by the Kansas City Water Department.

He explains that while the city makes its upgrades, the private utilities are able to come in and do their maintenance at the same time. That way, no work is needed after the streetcar infrastructure comes into place—which would be a much more expensive ordeal.

Donna Mandelbaum, marketing and communications coordinator for KC Streetcar, says that for drivers and pedestrians, right now is the most visually disruptive construction they will experience.

“It will look a lot different when we come through there with streetcar construction,” Mandelbaum said.

The current process involves a lot of jumping around from location to location to make these upgrades. Constructing the streetcar rail lines and other infrastructure will be a lot more predictable.

“We’ll be very systematic and strategic about it, making sure that we keep Main Street open the entire time and we don’t block businesses,” she said.

But before that construction begins, Main Street and its surrounding neighborhoods will have to deal with several more months of traffic headaches.

These utility upgrades won’t be complete until sometime in 2022. Then KC Streetcar will take its turn, likely completing construction sometime in 2024.

In a since-deleted tweet responding to a question about a potential contract extension for Kansas City Chiefs safety Tyrann Mathieu, Mathieu tweeted that he's "probably not" going to get a new deal in … END_OF_DOCUMENT_TOKEN_TO_BE_REPLACED

KANSAS CITY, Mo. — A manhole left uncovered is the source of concern after a woman damaged her car in Kansas City. The single-car crash happened at 11th Street and Tracy Avenue during the busy … END_OF_DOCUMENT_TOKEN_TO_BE_REPLACED

Kansas City, Missouri's COVID-19 emergency order was set to expire at the end of the month. But Mayor Quinton Lucas made it clear Friday that private businesses can still set their own rules.Any … END_OF_DOCUMENT_TOKEN_TO_BE_REPLACED

KANSAS CITY, MO (KCTV/AP) — All restrictions meant to slow the spread of the coronavirus were being rescinded as of midday Friday in Kansas City, Missouri, following guidance from the U.S. Centers for … END_OF_DOCUMENT_TOKEN_TO_BE_REPLACED