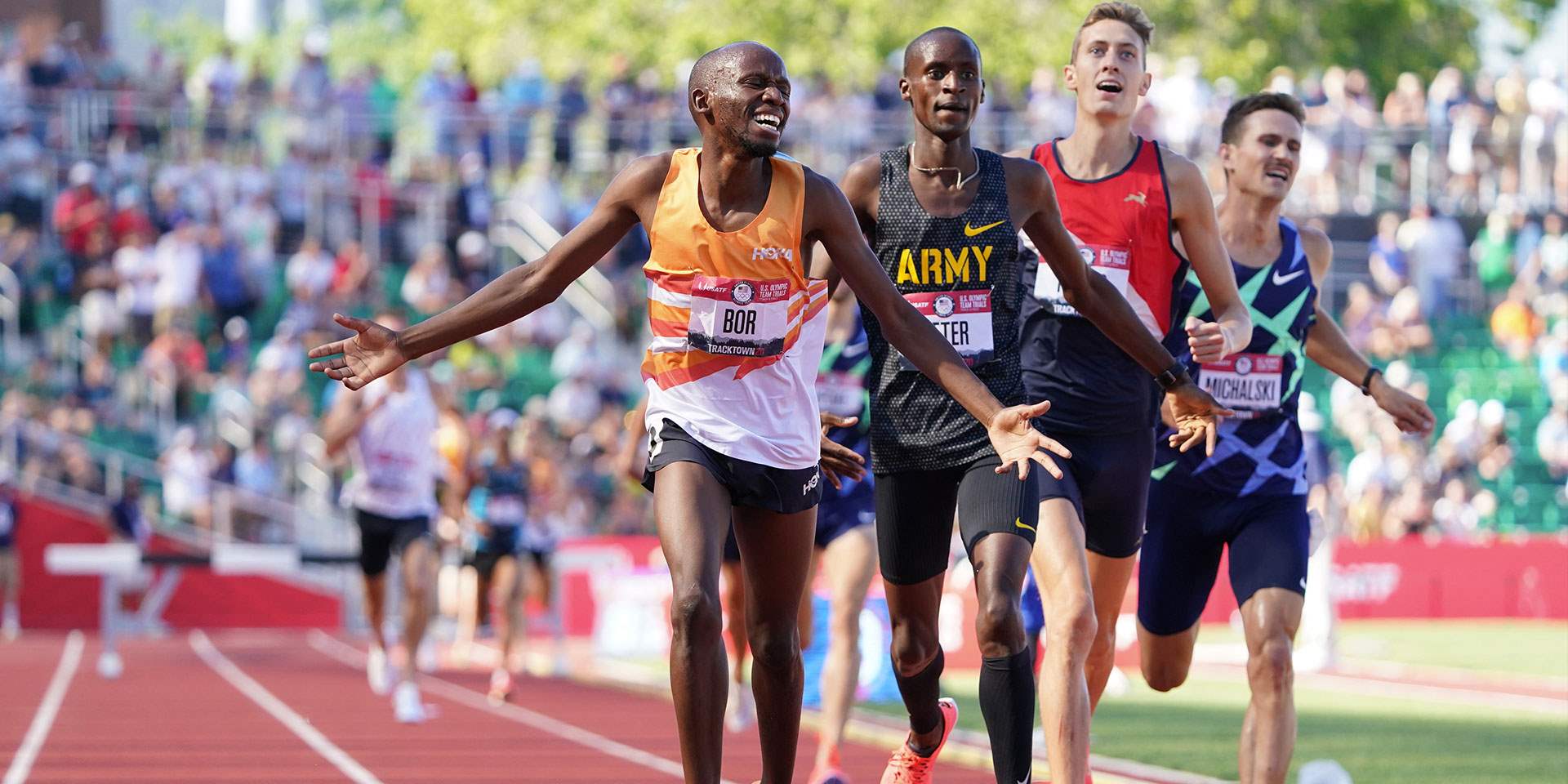 EUGENE — Six more men joined the Team USATF roster for the Tokyo Olympics on day eight of competition at the U.S. Olympic Trials – Track & Field, a day where the only thing hotter than the weather was the performances on the track and in the field. Finals in the men’s 3,000m steeplechase and discus produced exciting finishes, and a quartet of semifinals set the stage for the final two days.

Full event replays can be found on PeacockTV / NBCSN streaming services. Click here for more information. Competition results can be found at results.usatf.org.

Content to follow Donn Cabral (Hartford, Connecticut / USATF New York) through the first six laps of a steamy men’s 3,000m steeplechase, Hillary Bor (Colorado Springs, Colorado / USATF Colorado) and Isaac Updike (Dobbs Ferry, New York / USATF New York) sprinted to the front off the penultimate water jump and were just ahead of Benard Keter (Colorado Springs, Colorado / USATF Colorado). Bor, the third-fastest man in American history, and Keter started to move away stride by stride into the last 300m and stretched the lead into the last barrier. Bor cleared that one better than Keter and took off for the win in 8:21.34, with Keter second in 8:21.81. Mason Ferlic (Ann Arbor, Michigan / USATF Michigan) made the most of a slight bobble by Updike at the last water jump and raced through for the third Tokyo spot in 8:22.05. Daniel Michalski (Longview, Texas / USATF Southwestern) also passed Updike and was fourth in 8:22.54.

Two of the finalists in the men’s discus were sweating more than was warranted by the scorching temperatures, having to wait until the final three rounds to secure their spots on the plane for Tokyo. Reigning U.S. champion Sam Mattis (East Brunswick, New Jersey / USATF New York) led for four rounds after his first throw of 62.51m/205-1, and that would end up as his best of the day. 2017 World Championships bronze medalist Mason Finley (Overland Park, Kansas / USATF Missouri Valley) finally hit his stride in round four, moving atop the leaderboard with a 62.80m/206-0 and then uncorking a big 63.07m/206-11 in round five to win and to earn his second trip to the Games.

That left Reggie Jagers (Chula Vista, California / USATF Inland Northwest), the 2018 U.S. champion who is usually hampered as a left-handed thrower when winds favor the right-handers. On his final attempt, Jagers sailed the platter out to 62.61m/205-5 and moved up from fifth to second, eliciting an enormous roar from this year’s U.S. list leader when he realized his Olympic dream had come true after failing to qualify for the Trials final in 2016.

Rocketing off the turn with a sizable lead in the first semi, Jenna Prandini (Pflugerville, Texas / USATF Central California) didn’t slow down much as she became the 12th member of the U.S. sub-22 club with a lifetime best 21.99. Allyson Felix (Los Angeles, California / USATF Southern California), the Olympic gold medalist in 2012, made up a lot of real estate in the final 100m to take second in a season best 22.20, her fastest time since 2016. Dezerea Bryant (Ocoee, Florida / USATF Florida) was third in 22.37, and the next two women earned the time qualifier slots.

For the second day in a row, Gabby Thomas (Austin, Texas / USATF Texas Southern) took down her lifetime best, this time winning big in the second semi in 21.94. Collegians Anavia Battle (Inkster, Michigan / USATF Michigan) of Ohio State and Tamara Clark (Tuscaloosa, Alabama / USATF Alabama) of Alabama went 2-3 in 22.32-22.35 to snag the other two automatic berths in the final.

Throw a blanket over the first semifinal, and make it a pretty small one. After a modest opening 800m, a mass of humanity sprinted and jostled for position down the final 100m straight and it was this year’s fastest American, Craig Engels (Beaverton, Oregon / USATF Oregon), who came away the winner in 3:38.56. The next four finishers were within .15 seconds of each other and included NCAA runner-up Yared Nuguse (Louisville, Kentucky / USATF Kentucky) in second.

World Championships silver medalist Rai Benjamin (Mount Vernon, New York / USATF New York) picked up the pace a bit from yesterday’s first round heat when he cited the slow speed as the reason for his stutters at a couple hurdles. That wasn’t an issue today as Benjamin blazed down the backstretch and came off the final turn with a three stride lead, easing significantly over the final hurdle and sauntering to the line to win in 48.61. NCAA bronze medalist Cameron Samuel (Moreno Valley, California / USATF Southern California) took second in 49.01, and David Kendziera (Chapel Hill, North Carolina / USATF North Carolina) sealed his berth in the final with a third-place 49.05. The two time qualifiers were Trevor Bassitt (Elida, Ohio / USATF Ohio) and Aldrich Bailey (Arlington, Texas / USATF Southwestern).

Veteran of four Olympic Trials and an experienced international pacemaker, Chanelle Price (Eugene, Oregon / USATF Oregon) took the lead and held it through 400m in 58.96 in semifinal one, with American U20 record holder Athing Mu (Trenton, New Jersey / USATF New Jersey) just off her shoulder. Those two maintained that order until they came off the last turn where Mu and 2016 Trials winner Kate Grace (Portland, Oregon / USATF Oregon) moved away from Price. Mu won in 1:59.31, .12 ahead of Grace, and Price was also sub-2:00 in 1:59.90.

In a replay of their heat yesterday, Allie Wilson (Atlanta, Georgia / USATF Georgia) and Ajee’ Wilson (Philadelphia, Pennsylvania / USATF Mid-Atlantic) were 1-2 at the bell, passing 400m in 59.74. Allie Wilson continued to lead through 600m in 1:30.10, but Ajee’ Wilson came off the curve best and ran on to win in 1:59.49. Raevyn Rogers (Houston, Texas / USATF Gulf) passed Allie Wilson on the run-in to take second in 1:59.66, with Wilson third in 1:59.94. Michaela Meyer (Southbury, Connecticut / USATF Connecticut) and Nia Akins (Seattle, Washington / USATF Pacific Northwest), both from the second heat, were the time qualifiers for the final.

This year’s second-fastest American, Shamier Little (College Station, Texas / USATF Gulf) flew around the first turn in heat two and then settled in, running even with 2016 Rio bronze medalist Ashley Spencer (Austin, Texas / USATF Texas Southern) to her outside. With 100m to go, Little started to put a gap on Spencer, and she won easily in 55.22, .7 ahead of Spencer.

Showing the form that has already carried her to a world record, an Olympic title and a World Championships gold, Dalilah Muhhamad (Fort Worth, Texas / USATF Southern California) looked very controlled and comfortable in winning the final section in 55.51.

Reigning world champion Grant Holloway (Gainesville, Florida / USATF Florida) blew off some steam as he got out of the blocks well as usual and then powered over the barriers to finish in an impressive 13.11 to win the first heat by .41 over Jamal Britt (Iowa City, Iowa / USATF Central California) of Iowa. Reigning U.S. champion Daniel Roberts (Griffin, Georgia / USATF Georgia), who beat Holloway at Des Moines in 2019, outleaned Trey Cunningham (Winfioeld, Florida / USATF Alabama) of Florida State to take heat two in 13.22, .01 up on Cunningham, who set a lifetime best.

Both Devon Allen (Annapolis, Maryland / USATF Potomac Valley) and Michael Dickson (Beaufort, South Carolina / USATF South Carolina) crossed the line in 13.26 in the third heat, with Allen getting the decision by .008 as Dickson set a lifetime best. After five recalls in heat four, the sixth start was a charm for Iowa’s Jaylen McConico (Iowa City, Iowa / USATF Iowa) who outran Jarret Eaton (Phoenix, Pennsylvania / USATF Potomac Valley) to win in 13.35, with Eaton second in 13.51.

Breaking his own world U18 best in the first heat and bettering the American U20 record, Erriyon Knighton (Riverview, Florida / USATF Florida) slingshotted off the curve ahead of 2019 world champion Noah Lyles (Alexandria, Virginia / USATF Potomac Valley) and won in 20.04, with Lyles second in 20.19. Fred Kerley (Taylor, Texas / USATF Gulf), who was third in the 100m, clocked 20.41 to advance. Very little separated Isiah Young (Clermont, Florida / USATF Southern)  and Kenny Bednarek (Minneola, Florida / USATF Florida) in the second heat, as both let off the gas in the final 30m and Young won by .01 in 20.21. Josephus Lyles (Alexandria, Virginia / USATF Potomac Valley)was third in 20.39.

NCAA runner-up Terrance Laird (Downington, Pennsylvania / USATF Mid-Atlantic) of LSU, the fastest man in the world this year, came off the turn even with Jordan Booker (Houston, Texas / USATF Gulf) of Houston and eased past him to win in 20.44. Booker set a lifetime best of 20.49 in second. The final heat was won comfortably by Andrew Hudson (Cibolo, Texas / USATF Texas Southern) in 20.40, ahead of NCAA indoor champion Matthew Boling’s (Athens, Georgia / USATF Georgia) 20.47.

All of the top five entrants coming into the meet were untroubled in the qualifying, led by recently-minted American record holder Maggie Malone (Vestavia Hills, Alabama / USATF Gulf). Malone hit 59.62m/195-7 on her first toss and then shut it down for the day. Former national record holder Kara Winger (Colorado Springs, Colorado / USATF Colorado) followed the same script and hit 58.78m/192-10 on her initial attempt, while Ariana Ince (Chula Vista, California / USATF San Diego-Imperial) took all three of her throws and ended up with a best of 57.52m/188-8.

A couple hours after qualifying for the long jump final, LSU’s JuVaughn Harrison (Baton Rouge, Louisiana / USATF Southern) took one high jump, cleared 2.19m/7-2.25, and packed his bags as he became the first man in recent memory to qualify for both finals at the Trials. Five other men also had clean cards through that height, including 2012 Olympic silver medalist Erik Kynard (Toledo, Ohio / USATF Missouri Valley).

Click here for full results and schedule. Competition continues Saturday with the 20k racewalks, women’s 10,000m final, the start of the heptathlon and more.

In a since-deleted tweet responding to a question about a potential contract extension for Kansas City Chiefs safety Tyrann Mathieu, Mathieu tweeted that he's "probably not" going to get a new deal in … END_OF_DOCUMENT_TOKEN_TO_BE_REPLACED

KANSAS CITY, Mo. — A manhole left uncovered is the source of concern after a woman damaged her car in Kansas City. The single-car crash happened at 11th Street and Tracy Avenue during the busy … END_OF_DOCUMENT_TOKEN_TO_BE_REPLACED

Kansas City, Missouri's COVID-19 emergency order was set to expire at the end of the month. But Mayor Quinton Lucas made it clear Friday that private businesses can still set their own rules.Any … END_OF_DOCUMENT_TOKEN_TO_BE_REPLACED

KANSAS CITY, MO (KCTV/AP) — All restrictions meant to slow the spread of the coronavirus were being rescinded as of midday Friday in Kansas City, Missouri, following guidance from the U.S. Centers for … END_OF_DOCUMENT_TOKEN_TO_BE_REPLACED