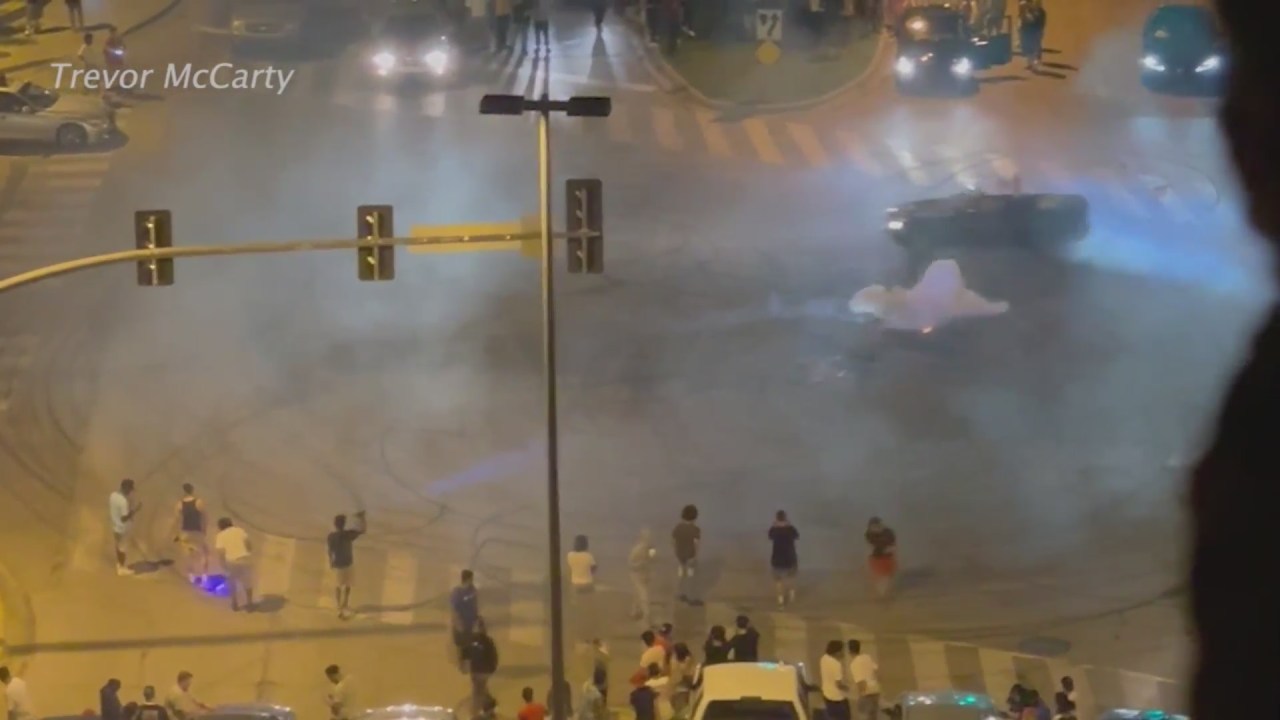 KANSAS CITY, Mo. — Independence Day closed out with a familiar but unwelcome sight. Sideshows in front of Union Station.

“This is not what you want Kansas City to be represented as, doughnut marks, this is a disgrace for the city,” Desmound Logan said.

He said sideshows are bound to happen, especially on holidays like the Fourth of July.

Logan spends his time educating the public about the importance of embracing sideshows with his organization “Smoke the Tires, Not The Homies” explaining the drivers possess great talent and just need somewhere to express themselves in a controlled environment. He admits Monday morning’s event is not acceptable and isn’t the best representation of the city.

Pamela Rauh, a tourist from Buffalo, New York, saw the event right from her window in the Westin hotel. Raul thought at first, she was witnessing a planned Fourth of July Celebration.

After the initial shock subsided, Rauh said she too believes the drivers should have somewhere safe to doughnut.

“People would be very entertained,” she said. “As long as nobody is in danger, we were amazed it was happening, an organized event is definitely people would be interested in.” One thing Rauh noted as she watched the sideshows,  was the absence of police.

FOX4 reached out to the Kansas City Police Department. In a statement, KCPD said the weekend was a busy one, with police responding to 62 calls between 11:30 p.m. and 1 a.m., along with shootings across the city that resulted in 11 injuries, including one deadly.

KCPD said they are looking for innovative ways to combat sideshows.

“Absent someone injured or creating an imminent life endangering situation,” Sgt. Jake Becchina said, “We would handle a side show in the manner we always have.”

In a since-deleted tweet responding to a question about a potential contract extension for Kansas City Chiefs safety Tyrann Mathieu, Mathieu tweeted that he's "probably not" going to get a new deal in … END_OF_DOCUMENT_TOKEN_TO_BE_REPLACED

KANSAS CITY, Mo. — A manhole left uncovered is the source of concern after a woman damaged her car in Kansas City. The single-car crash happened at 11th Street and Tracy Avenue during the busy … END_OF_DOCUMENT_TOKEN_TO_BE_REPLACED

Kansas City, Missouri's COVID-19 emergency order was set to expire at the end of the month. But Mayor Quinton Lucas made it clear Friday that private businesses can still set their own rules.Any … END_OF_DOCUMENT_TOKEN_TO_BE_REPLACED

KANSAS CITY, MO (KCTV/AP) — All restrictions meant to slow the spread of the coronavirus were being rescinded as of midday Friday in Kansas City, Missouri, following guidance from the U.S. Centers for … END_OF_DOCUMENT_TOKEN_TO_BE_REPLACED