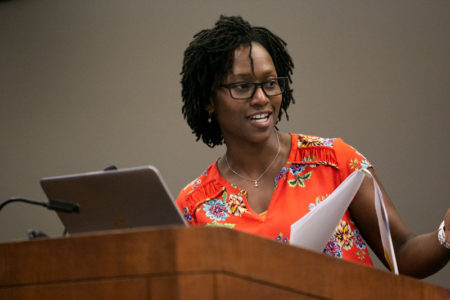 Plans for a new residential subdivision are underway south of 55th Street between Noland and Rosehill roads in Shawnee, but neighboring homeowners are concerned about potential disruption to their properties.

After hearing from several residents who were generally opposed to the project, the Shawnee Planning Commission on Monday voted 8-0 to approve rezoning the remainder of the site from agricultural to single-family residential as well as a preliminary plat.

The crux of most residents’ concerns was the addition of new vehicle traffic from the additional homes coming through their subdivision.

They are especially concerned about construction traffic through the Pflumm Woods neighborhood, which would serve as an access point to the building site for the new homes.

Some suggested the developer access the site through Ray Marsh Elementary School to the east, or the property owner of 13021 W. 55th St. to the north.

Below is an aerial image of the site. The Pflumm Woods homes are to the west (or left) of the proposed site, and Ray Marsh Elementary is directly to the east.

Other residents voiced frustration that the wooded area behind their homes would disappear, disrupting natural habitat for wildlife and potentially negatively impacting their property values.

Some said they were told by real estate agents when they bought their homes that the site would remain undeveloped.

“I know that some people have come up and said you can’t stop this, but this has kind of been piece-mealed,” said Uraya Sanders, whose home is beside the proposed construction entrance.

Commissioner Kathy Peterson was mostly concerned with the construction entrance and traffic passing through the neighborhood.

Uraya Sanders and several of her neighbors raised objections to the project, particularly because out of concern for the disruption to their Pflumm Woods neighborhood with an increase in traffic.

“It’s perhaps a bit foggy in my head exactly how many people are going to be putting up with construction traffic,” said Commissioner Kathy Peterson. “I do understand that is multiple cement trucks, electricians, the gamut of construction workers, not to mention grading and trucks that are going to be hauling off things.”

Some commissioners said they sympathized with residents about their concerns.

“I would encourage the developer to continue to work with the nearby residents to come to amenable solutions,” said Commissioner Bruce Bienhoff. “I know we have a very good and professional staff, and I expect them to continue to make sure that we plan this thing out properly.”

A recording of the meeting is on the city’s website and can be viewed below. Discussion begins at 1:16:06.

In a since-deleted tweet responding to a question about a potential contract extension for Kansas City Chiefs safety Tyrann Mathieu, Mathieu tweeted that he's "probably not" going to get a new deal in … END_OF_DOCUMENT_TOKEN_TO_BE_REPLACED

KANSAS CITY, Mo. — A manhole left uncovered is the source of concern after a woman damaged her car in Kansas City. The single-car crash happened at 11th Street and Tracy Avenue during the busy … END_OF_DOCUMENT_TOKEN_TO_BE_REPLACED

Kansas City, Missouri's COVID-19 emergency order was set to expire at the end of the month. But Mayor Quinton Lucas made it clear Friday that private businesses can still set their own rules.Any … END_OF_DOCUMENT_TOKEN_TO_BE_REPLACED

KANSAS CITY, MO (KCTV/AP) — All restrictions meant to slow the spread of the coronavirus were being rescinded as of midday Friday in Kansas City, Missouri, following guidance from the U.S. Centers for … END_OF_DOCUMENT_TOKEN_TO_BE_REPLACED