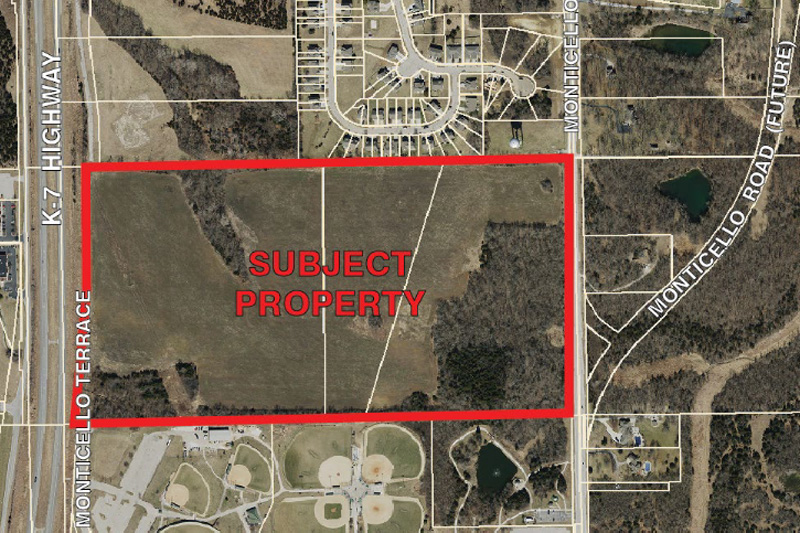 Plans for a new commercial logistics facility are underway in southwestern Shawnee.

K7 Logistics LLC, a company led by Kansas City-based Block Real Estate Services, is planning to build two industrial buildings on about 83 acres of land off Monticello Terrace, near the junction of K-7 Highway and 83rd Street.

The proposed site sits just north of the 3&2 Baseball Complex and lies immediately south of a residential subdivision.

After about an hour of discussion and public comment, the Shawnee Planning Commission on Monday voted 8-0 to approve a preliminary site plan, preliminary plat and rezoning of the site from commercial highway and agricultural to planned industrial.

The Shawnee City Council is slated to consider the preliminary plans and rezoning of this site at its meeting July 12.

The developer must have final site plan and final plat approvals from the city before construction can begin.

Matthew Reheis and a couple of residents raised concerns with the commercial project.

A couple of neighboring homeowners and a residential developer raised concerns about the project, particularly that the commercial site will congest the surrounding area with truck traffic and bring noise and light pollution.

Some residents said the project is not a good fit for the area, being so close to a residential neighborhood and the youth baseball complex.

“You have a city park, a ball field, and you want to put a commercial building between that and neighborhoods?” said Matthew Reheis, a neighboring resident. “I don’t think that’s the right spot for it.”

Commissioners’ main concerns were to ensure the area could handle industrial traffic, as well as landscaping and buffering from the residential area.

Some said the residents’ concerns were valid, commissioners said.

“I would hope that some of this stuff can be worked to where we don’t have such a huge amount of traffic through one entrance and exit,” said Chairman Dennis Busby. “Otherwise, when you come before for a final plat, if that’s not worked out, I think I would be very skeptical on thinking we’d arrived at a good plan for the city or for the developer.”

Curtis Holland with Polsinelli, a local law firm representing the developer, said they’ve adjusted the plans by moving a building from the eastern part of the development to the south and building a berm and “heavy” landscaping to create a buffer between the commercial site and the residential neighborhood.

Holland added that they plan to work with city staff and neighbors to minimize disruption to the area.

Here’s an aerial view of the project site, proposed for an area just north of a youth baseball complex which can be seen immediately to the south of the proposed site’s boundary. A residential area is directly to the north.

The developer is also responsible for several street improvements near the project, including:

Holland said the main improvements that should be done are adding a southbound right turn lane on Monticello Terrace at 83rd and a second left turn lane at the same intersection.

The site will also have access points on Monticello Road, even after the road is realigned. That road is under construction now.

Meanwhile, city staff expressed some concern with the intersection of 83rd Street and Monticello Terrace, particularly because it will become more difficult for vehicles traveling through this area.

The developer may be required to provide additional access in this area, specifically along “Old Monticello Road” once it’s realigned next to the development.

Below is a recording of the meeting. Discussion begins at 19:59.

In a since-deleted tweet responding to a question about a potential contract extension for Kansas City Chiefs safety Tyrann Mathieu, Mathieu tweeted that he's "probably not" going to get a new deal in … END_OF_DOCUMENT_TOKEN_TO_BE_REPLACED

KANSAS CITY, Mo. — A manhole left uncovered is the source of concern after a woman damaged her car in Kansas City. The single-car crash happened at 11th Street and Tracy Avenue during the busy … END_OF_DOCUMENT_TOKEN_TO_BE_REPLACED

Kansas City, Missouri's COVID-19 emergency order was set to expire at the end of the month. But Mayor Quinton Lucas made it clear Friday that private businesses can still set their own rules.Any … END_OF_DOCUMENT_TOKEN_TO_BE_REPLACED

KANSAS CITY, MO (KCTV/AP) — All restrictions meant to slow the spread of the coronavirus were being rescinded as of midday Friday in Kansas City, Missouri, following guidance from the U.S. Centers for … END_OF_DOCUMENT_TOKEN_TO_BE_REPLACED