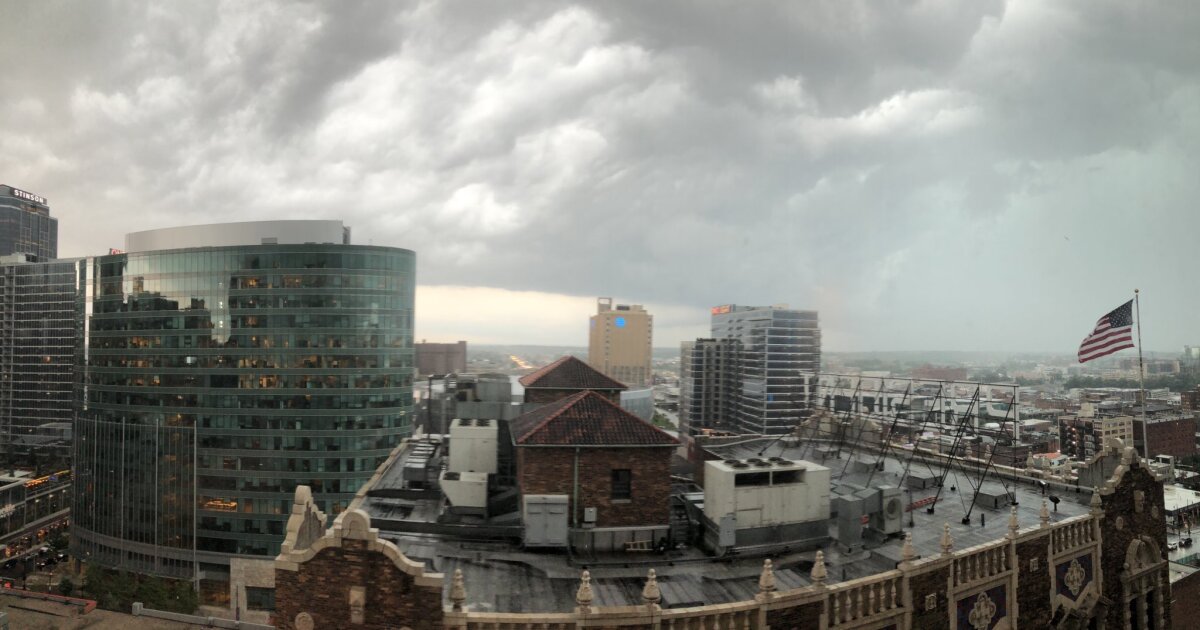 UPDATE, 9:28 p.m. | The mayor of Lake Annette in Cass County has issued a voluntary evacuation for residents, as some have had issues with water in their homes.

Flooding here at Lake Annette as the mayor issued a voluntary evacuation as the rain keeps pouring down. She tells me some residents have had some issues with water in their houses and hoping they don’t have to do any water rescues. More coming up at 10 on @41actionnews. #mowx pic.twitter.com/zNOLAHQs5p

A double rainbow is spotted on June 25, 2021, at 152 Highway and Green Hills Road after storms moved through the Kansas City metro.

UPDATE, 7:24 p.m. | The severe thunderstorm watch has been canceled for Douglas County.

UPDATE, 6:21 p.m. | Evergy has restored power to roughly 100 customers. Outages still are spread across the metro.

UPDATE, 6:13 p.m. | Flash flooding has been reported in Plattsburg County. Highway 33, north of Highway 116, is reported ot be covered in water.

UPDATE, 6:05 p.m. | A flash flood watch will remain in effect until Saturday morning throughout the Kansas City metro, according to the National Weather Service.

41 Action News meteorologist Wes Peery reports that rain accumulation of 8 to 10 inches could be possible.

UPDATE, 6 p.m. | Sporadic power outages are being reported in Independence.

UPDATE, 5:25 p.m. | Tornado clouds have been spotted south of St. Joseph, according to police in the area. Residents are advised to take cover.

The outages are scattered from the Northland to Olathe.

BPU also reported outages, though only 277. The largest cluster is near North 77th Street and Leavenworth Road.

Additionally, the severe thunderstorm warning for Johnson, Linn and Miami counties has expired.

UPDATE, 5:11 p.m. | The tornado warning for Henry and Johnson counties has expired.

UPDATE, 5:08 p.m. | The National Weather Service has issued a severe thunderstorm warning for Belton, Raymore and Harrisonville until 5:45 p.m.

4:55 p.m. | A tornado warning has been issued for parts of Henry and Johnson Counties in Missouri until 5:15 p.m.

Miami, Linn and Johnson counties also are under the same warning.

UPDATE, 4:15 p.m. |A severe thunderstorm warning has been issued for Leavenworth, Lansing and Parkville until 5 p.m.

UPDATE, 4:11 p.m. | Kansas Highway Patrol reports that Country Stampede in Topeka is on hold due to lightning in the area.

4:05pm– This is turning dangerous quickly

A slew of severe thunderstorm warnings(yellow) are in effect and are being followed up by flash flood warnings(green).

Heavy rain coming down now on Troost Ave and 63rd in a KCMO. Visibility on the roads is not that good, so be careful out there. pic.twitter.com/noWJCSS4gP

UPDATE, 3:59 p.m. | The City of Leavenworth is preparing for flooding as storms move through Kansas and Missouri.

Additionally, English Landing and Platte Landing parks in Parkville will be closed due to potential flooding.

EARLIER | The National Weather Service has issued a severe thunderstorm watch for an area that includes the Kansas City metro.

The watch is in effect until 9 p.m. Friday.

Storms are expected to form between 2 and 5 p.m. with the strongest parts focusing south of Interstate 70 in the metro.

Hail, high wind and even a small tornado are possible with the storms.

In a since-deleted tweet responding to a question about a potential contract extension for Kansas City Chiefs safety Tyrann Mathieu, Mathieu tweeted that he's "probably not" going to get a new deal in … END_OF_DOCUMENT_TOKEN_TO_BE_REPLACED

KANSAS CITY, Mo. — A manhole left uncovered is the source of concern after a woman damaged her car in Kansas City. The single-car crash happened at 11th Street and Tracy Avenue during the busy … END_OF_DOCUMENT_TOKEN_TO_BE_REPLACED

Kansas City, Missouri's COVID-19 emergency order was set to expire at the end of the month. But Mayor Quinton Lucas made it clear Friday that private businesses can still set their own rules.Any … END_OF_DOCUMENT_TOKEN_TO_BE_REPLACED

KANSAS CITY, MO (KCTV/AP) — All restrictions meant to slow the spread of the coronavirus were being rescinded as of midday Friday in Kansas City, Missouri, following guidance from the U.S. Centers for … END_OF_DOCUMENT_TOKEN_TO_BE_REPLACED