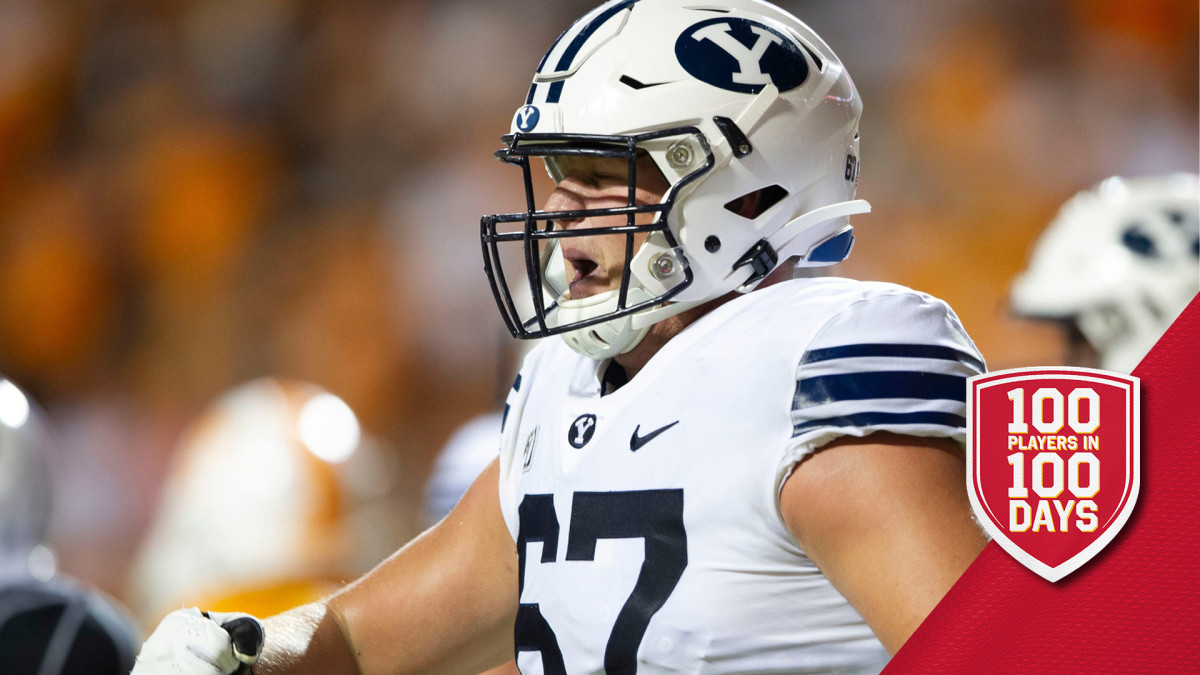 BYU tackle Brady Christensen is a smart, savvy technician who understands he needs to win with fundamentals. He has a high football IQ and can identify and handle blitzes, stunts, pass-rush moves and counters well. He also maintains good footwork throughout his rep.

Power is the other staple of Christensen’s game. He provides a good initial punch at the point of contact and his motor always revs high. He drives with force in the run game and sets a solid anchor in pass protection. When forced to move laterally, he shuffles his feet quickly and resets his base. There isn’t anything fancy about Christensen’s game, but he does just about everything at an average-to-above-average level.

While Christensen isn’t a poor athlete, he isn’t an excellent one either. Speed rushers pose as legitimate threats to him, and that issue may be highlighted in the NFL. He has the technique to stop EDGE players who don’t have the moves to match their speed, but those who can bend up the arc and cut inside on a dime have a higher chance of getting home to the quarterback. Christensen isn’t fast and won’t win any footraces, but he always tries to get out ahead of the play and find work at the second level or in space.

Christensen’s pad level can be higher than desired at times, so getting lower and truly anchoring down his spot will help him win more frequently. His frame can likely withstand adding several pounds of muscle, so long as it doesn’t sap him of any quickness or speed. Christensen projects as a tackle as things currently stand but if he fails, working in a phone booth at guard would also be an option.

How Christensen fits with the Chiefs:

The Chiefs’ need for a tackle is severe, especially with Eric Fisher set to miss most or all of the 2021 campaign and Mitchell Schwartz’s future unknown. Christensen is an asset in both the run and pass game, boasting a high floor as a prospect. He has a little work to do, but would likely be able to receive significant snaps very early on in his NFL career. The Chiefs have missed a mauler on the front line, and Christensen could be that player.

Christensen is a smart tackle with good size and room to grow a bit more. He brings power to the table and while his mobility and athletic profile aren’t great, they are far from red flags. His ceiling is low but in the worst case, he projects as a starting guard or swing tackle at the next level. If the opportunity presents itself, as it may in Kansas City, Christensen deserves a shot to be a starting tackle at some point. He grades out firmly as a third-round pick.

In a since-deleted tweet responding to a question about a potential contract extension for Kansas City Chiefs safety Tyrann Mathieu, Mathieu tweeted that he's "probably not" going to get a new deal in … END_OF_DOCUMENT_TOKEN_TO_BE_REPLACED

KANSAS CITY, Mo. — A manhole left uncovered is the source of concern after a woman damaged her car in Kansas City. The single-car crash happened at 11th Street and Tracy Avenue during the busy … END_OF_DOCUMENT_TOKEN_TO_BE_REPLACED

Kansas City, Missouri's COVID-19 emergency order was set to expire at the end of the month. But Mayor Quinton Lucas made it clear Friday that private businesses can still set their own rules.Any … END_OF_DOCUMENT_TOKEN_TO_BE_REPLACED

KANSAS CITY, MO (KCTV/AP) — All restrictions meant to slow the spread of the coronavirus were being rescinded as of midday Friday in Kansas City, Missouri, following guidance from the U.S. Centers for … END_OF_DOCUMENT_TOKEN_TO_BE_REPLACED