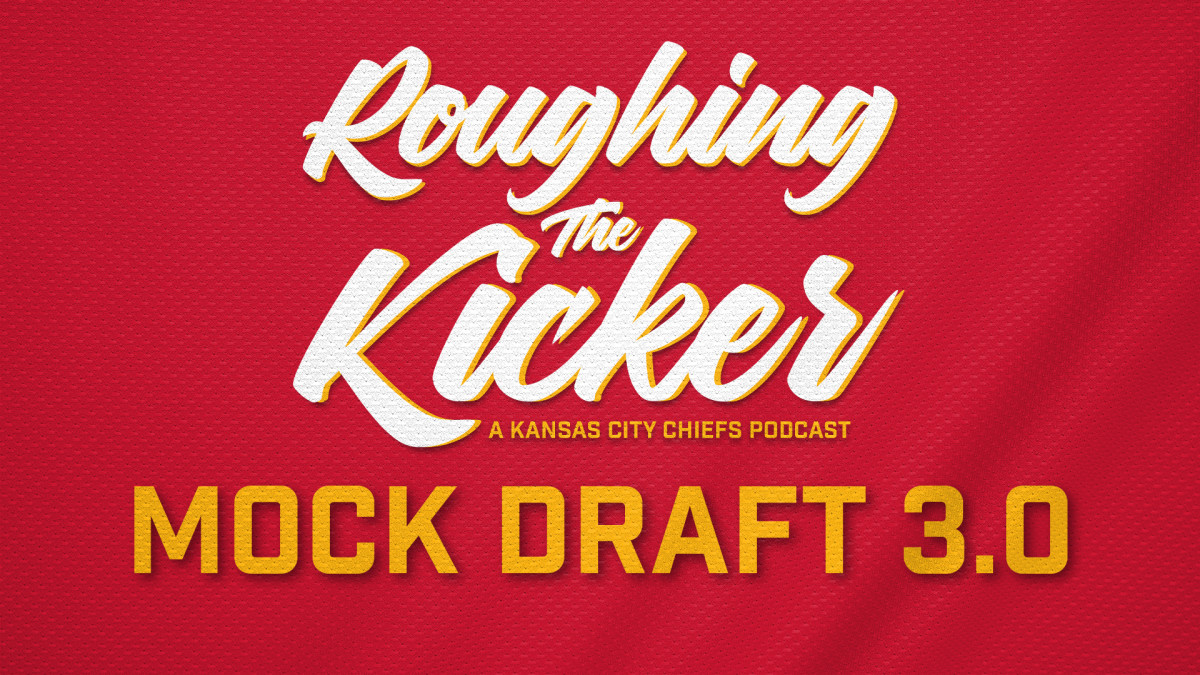 As Mother Nature has released her icy grip on Kansas City and spring-like weather has entered the forecast, it feels like we are nearing the 2021 NFL Draft even though we are still months away.

With already two versions in the bag, it’s time to make it a crowd with our third rendition of our Kansas City Chiefs 2021 Mock Draft.

As always, Arrowhead Report draft analyst Jordan Foote joined me in the creation of this week’s mock draft on today’s episode of Roughing the Kicker.

For our mock draft, we partnered with NFL Mock Draft Database and its 2021 mock draft simulator. As for draft settings, we used the recommended realistic setting with strict trading.

For the third straight week, here is our updated 2021 Roughing the Kicker Chiefs mock draft. For more in-depth thought processes on the picks, go listen to the podcast where we give a comprehensive breakdown of each pick.

With Jalen Mayfield off the board before our selection, we were forced to take a new player at No. 31 overall. That so happened to be Alabama tackle Alex Leatherwood, who was a unanimous first-team All-American and a part of the award-winning Crimson Tide offensive line. Leatherwood is far from a one-dimensional tackle as he is strong in both the run and pass game. If he happens to be on the board when the Chiefs are selecting on April 29, they should run as fast as they can to the podium (or phone) to announce this pick.

Plus, the fit is a no-brainer. Jordan has already scouted Leatherwood in his 100 in 100 series and said the fit between Leatherwood and Kansas City would be a dream.

Leatherwood’s ability to play guard or tackle should appeal to a team like the Chiefs. With so many departing players and injuries throughout the offensive line, a versatile option may be the best one. Leatherwood’s power-punch combo is what the Chiefs have been missing at the line of scrimmage. In terms of team need and player fit, the two sides joining forces makes a lot of sense.

There are many different directions the Chiefs could take with the No. 63 pick, but Amon-Ra St. Brown might be the best selection if he is still available. St. Brown is a heck of an athlete and could make an impact right away in Kansas City. With the potential question marks surrounding the wide receiver position, he has the ability to play the X-receiver role the Chiefs would be looking for. He has a strong route tree and has shown the ability to make teams pay in the middle of the field.

Jordan recently looked at St. Brown as well in his series and thinks he could thrive in Kansas City’s offense.

The Chiefs may lose a couple of wide receivers to free agency and haven’t seen a ton of progress from Mecole Hardman, so adding more talent to that position group is critical. Andy Reid’s scheme would allow St. Brown to work in the slot on occasion, but he’d almost surely be an “X” receiver in Kansas City. His ability to get open in the short and intermediate passing game is a great fit with the Chiefs, and he’d have plenty of one-on-one opportunities due to Tyreek Hill and Travis Kelce commanding a lot of attention.

Richie Grant is one of those guys who can do everything, which is something Chiefs defensive coordinator Steve Spagnuolo likes. Grant’s versatility should be a large draw for Kansas City. The Chiefs also tend to like Senior Bowl players and Grant performed well during the practices and the game. He could also provide some solid depth for Kansas City moving forward with the uncertainty surrounding Daniel Sorensen.

This is another guy that Jordan has scouted and had good things to say about Grant’s fit with the Chiefs.

The positional need may be present here. It depends on whether Daniel Sorensen returns or signs elsewhere. Adding another quality athlete with versatility would be a plus for the Chiefs on defense and may cause a ripple effect. Since Grant can move around the field and fill different roles, he would allow some other players (Tyrann Mathieu, Juan Thornhill, L’Jarius Sneed) to do the same. His fit with the Chiefs is good.

Standing at 6-foot-3 and weighing 242 pounds, Pete Werner has evolved from a specialty linebacker at Ohio State to an every-down player and that should be no different at the next level. Werner is an average athlete who uses his hands well and is a guy who isn’t afraid of contact. With most of the linebacker snaps likely going to Willie Gay Jr. and Anthony Hitchens next season, this year would likely be a learning season for Werner, much like last year was for Gay. Either way, the selection of Werner in the fourth-round is about as good of a value pick as you can find.

Just a few short weeks ago, we took Hayes in the fifth round of our Mock Draft 1.0, and here we are with him again. Like we said the first time, Hayes isn’t a guy expected to start on Day 1 but if he has the ability to learn and put on some more weight in his first season, he could see some playing time. You know what you’re going to get from him and that’s big for these late-round guys.

Hayes was looked at on Day 11 of Jordan’s 100 in 100 series and he said, much like Grant, Hayes would be a good fit in Spagnuolo’s scheme.

In terms of measurables, Hayes is teetering on the low end of the Steve Spagnuolo size spectrum but barely sneaks into that range. He makes sense as a rotational EDGE piece, similar to 2020 fifth-round pick Mike Danna. Hayes offers more upside due to the fact that if he ever puts everything together, the NFL will be looking at a totally different player. That’s a huge if, though.

Josh Palmer is a guy who isn’t being talked about much but could be a solid role player for any team, especially the Chiefs. Palmer’s big body mixed with his ball skills makes him a perfect guy to draft late and develop in the system. The frame is there as Palmer checked in at 6-foot-2 and 210 pounds at the Senior Bowl. In the game, Palmer hauled in two catches for 27 yards and a touchdown after impressing in practice all week. If the Chiefs are looking for a steal in the late rounds, Palmer is their guy.

You can watch the full mock draft with Jordan and I’s commentary on the Roughing the Kicker YouTube page or you can watch it below.

In a since-deleted tweet responding to a question about a potential contract extension for Kansas City Chiefs safety Tyrann Mathieu, Mathieu tweeted that he's "probably not" going to get a new deal in … END_OF_DOCUMENT_TOKEN_TO_BE_REPLACED

KANSAS CITY, Mo. — A manhole left uncovered is the source of concern after a woman damaged her car in Kansas City. The single-car crash happened at 11th Street and Tracy Avenue during the busy … END_OF_DOCUMENT_TOKEN_TO_BE_REPLACED

Kansas City, Missouri's COVID-19 emergency order was set to expire at the end of the month. But Mayor Quinton Lucas made it clear Friday that private businesses can still set their own rules.Any … END_OF_DOCUMENT_TOKEN_TO_BE_REPLACED

KANSAS CITY, MO (KCTV/AP) — All restrictions meant to slow the spread of the coronavirus were being rescinded as of midday Friday in Kansas City, Missouri, following guidance from the U.S. Centers for … END_OF_DOCUMENT_TOKEN_TO_BE_REPLACED