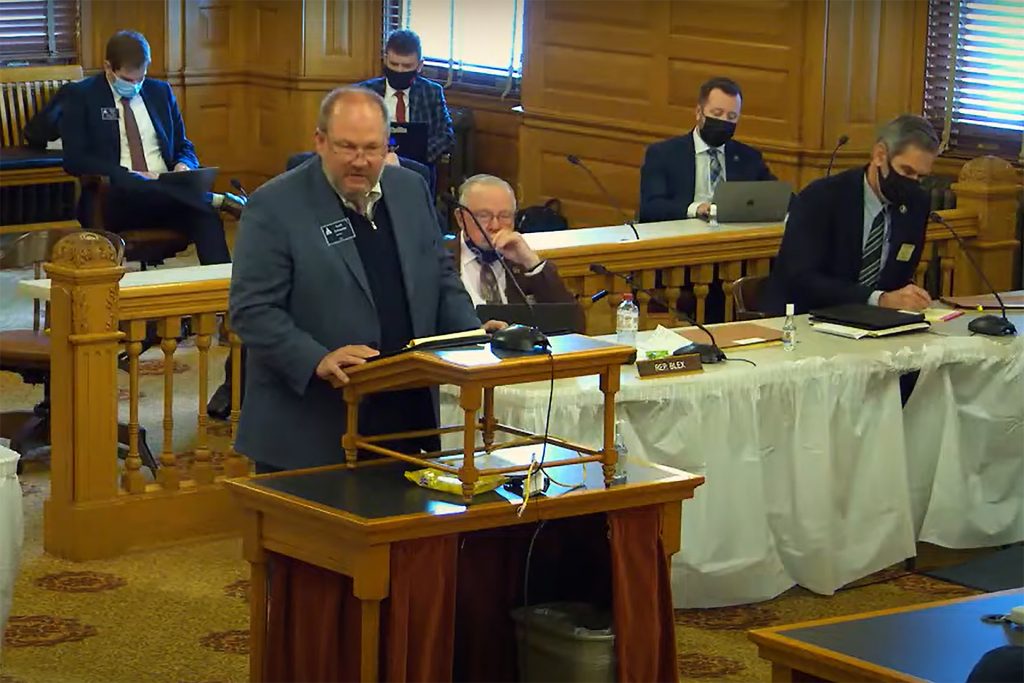 TOPEKA — Wichita restaurant owner John Arnold says it is difficult to avoid feeling vilified by government restrictions placed on businesses in the interest of public health.

The pandemic treated his industry differently, Arnold explained to lawmakers during a hearing Tuesday in the House. Restaurants were forced to close altogether as COVID-19 first crept across the state, and only allowed to reopen with limited capacity.

The owner of Jax Restaurant and Bar, Deano’s Grill and Tapworks, Stearman Airfield Bar and Grill, and Oak and Pie Pizza had to figure out how to unload expired beer without contaminating the wastewater system. Some of his employees refused to return to work. To pay his property tax bill, he took out a loan that he will be paying on for years.

And he lost his head chef to the deadly virus.

“We not only were down financially, we took the human toll, which was just just devastating to us,” Arnold said.

He joined others from the restaurant industry in supporting House Bill 2142, which would punish counties that imposed health orders that limited business activities. The counties would have to reimburse businesses for 100% of their property tax bill, including property taxes paid to the state and other taxing entities, for a proportionate amount of business lost.

The bill appears to be a conversation starter, but perhaps not the solution, for lawmakers eager to help restaurants recover from the pandemic’s severe financial toll. County representatives warned they would have to make steep cuts to law enforcement budgets if forced to repay an estimated $500 million in property tax refunds across the state. The bill only applies to county-imposed restrictions, absolving Gov. Laura Kelly of the responsibility for losses caused by a statewide shutdown at the start of the pandemic.

There also are lingering questions about who would benefit from the bill when any business could apply for relief and few restaurants own their building.

“It looks like the property tax money would not only be going back to those developers, but out-of-state developers who pay those property taxes,” said Rep. Jerry Stogsdill, D-Prairie Village.

Scott Schneider, who represents the Kansas Restaurant and Hospitality Association, said the decision to limit businesses would become the subject of litigation based on protections afforded in the 5th Amendment of the U.S. Constitution. The amendment says private property can’t be taken for public use without just compensation, but there are diverging opinions about whether a health order can be construed as a “taking.”

Schneider said restaurants in Kansas lost $325 million in revenue by being closed for one month, and one-sixth of restaurants nationwide are expected to close permanently as a result of the pandemic.

“We’re not here arguing whether or not the county or the state has policing powers,” Schneider said. “We think they do they have legitimate policing powers. But if they’re going to exercise them, there needs to be a way to understand that compensation has to be given.”

Jay Hall, representing the Kansas Association of Counties, said it wasn’t fair to impose the financial burden on governing bodies that also face difficult choices. In Johnson County alone, Hall said, the bill would bring a $177 million cost to the county.

Sedgwick County Commissioner Pete Meitzner said the county would have to raise taxes and eliminate positions for 40 sheriff’s officers if forced to pay the retroactive property tax rebate.

Trey Cocking, of the Kansas League of Municipalities, told lawmakers the bill was an attempt to defund the police — a reference to police reforms proposed by Black Lives Matter and a phrase widely opposed by Republicans.

Cocking also said the hospitality industry in South Dakota suffered more losses than in Kansas, even though there were no government-imposed restrictions in South Dakota.

“At the end of the day, it is not the government that is making these decisions,” Cocking said. “It is people voting with their footsteps. And when they don’t feel safe, they’re not going to the restaurants. Until we can make people safe, restaurants are not going to be full. It’s not about a government mandate. It’s about getting to a point of safety.”

KANSAS CITY, Mo. — The environment, children and smoking are issues Vari Patel and three other teens from the Kansas City metro felt needed attention so people can live healthier lives. "And when … END_OF_DOCUMENT_TOKEN_TO_BE_REPLACED

KANSAS CITY, Mo. — Kansas City, Missouri, Mayor Quinton Lucas confirmed Monday not only that he’d been married earlier this month — but that he and his wife welcomed a baby boy, too. In a post to … END_OF_DOCUMENT_TOKEN_TO_BE_REPLACED

KANSAS CITY, Mo. — Kansas City, Missouri, leaders once again will look into renaming city streets in honor of Dr. Martin Luther King Jr. The city's Board of Parks and Recreation Commissioners will … END_OF_DOCUMENT_TOKEN_TO_BE_REPLACED