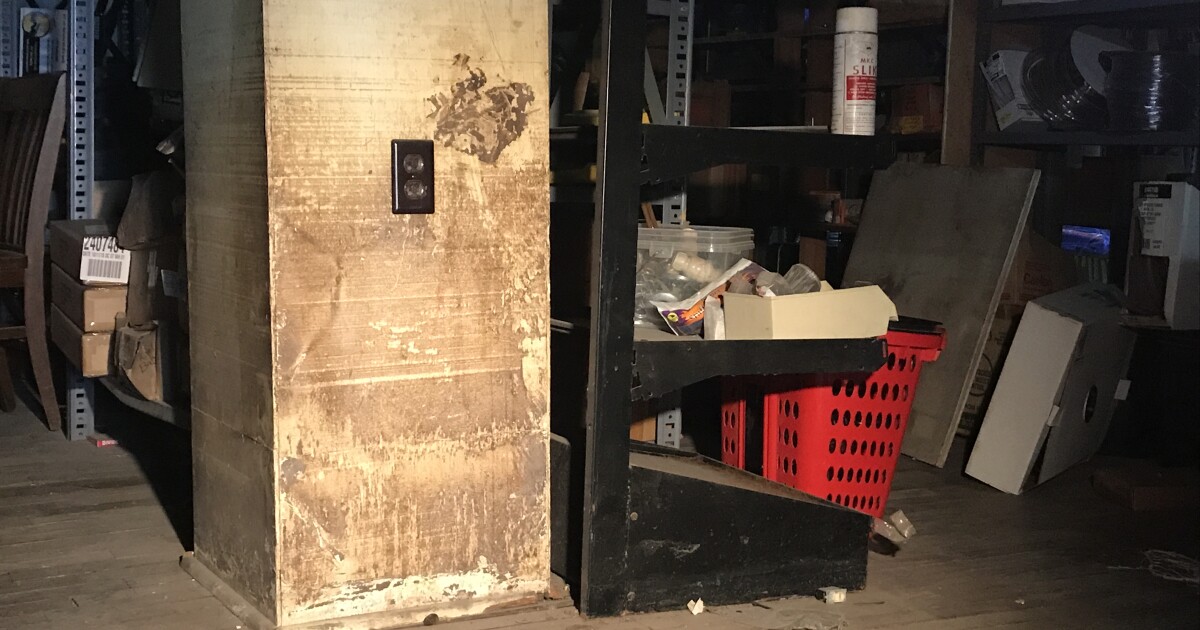 “You could see the water from my bedroom window [in Kansas City, Kansas’ Argentine neighborhood],” Eickhoff recalled.

He turned 11 in 1951 when floodwaters from the Kansas River rose over dikes and levees, flooding cities along its path from Manhattan to Kansas City, killing more than a dozen people and causing roughly $9 billion in damage by today’s value.

“It brought three feet of mud everywhere,” Eickhoff said. “I shoveled a lot of it.”

When Eickhoff bought a building near 7th Street and Kansas Avenue in the city’s Armourdale district to open L.A. True Value Hardware in 1985, he found mud on the building’s support columns roughly 20 feet above the street. Over the years, he’s made sure never to paint over the mud and handprints from the 1951 flood.

“It’s part of history. I like to remember that,” he said. “Of course, it’s getting dimmer in people’s memory now, back then everybody wanted to remember it.”

The Wyandotte County Museum opened a special exhibit commemorating the 70th anniversary of the flood in order to keep the memory from dimming.

Director Amy Loch said pictures, stories, videos and more that are gathered in the exhibit profile how the flood changed communities in an instant and continues to impact lives today.

“I think it’s also important for the metro because flooding is something that is an ongoing process,” Loch said. “They’re still working on strengthening the levees and improving them.”

Since 1951, the Army Corps of Engineers has built dams and reservoirs along the Kansas River basin. In 2020, it began a $500 million project to strengthen levees around Kansas City, Kan., and the West Bottoms of Kansas City, Missouri. The project is expected to be complete in 2026.

The special exhibit at the Wyandotte County Museum will be on display until the beginning of September. The museum is located at 631 N 126th St., Bonner Springs, KS, 66012.

In a since-deleted tweet responding to a question about a potential contract extension for Kansas City Chiefs safety Tyrann Mathieu, Mathieu tweeted that he's "probably not" going to get a new deal in … END_OF_DOCUMENT_TOKEN_TO_BE_REPLACED

KANSAS CITY, Mo. — A manhole left uncovered is the source of concern after a woman damaged her car in Kansas City. The single-car crash happened at 11th Street and Tracy Avenue during the busy … END_OF_DOCUMENT_TOKEN_TO_BE_REPLACED

Kansas City, Missouri's COVID-19 emergency order was set to expire at the end of the month. But Mayor Quinton Lucas made it clear Friday that private businesses can still set their own rules.Any … END_OF_DOCUMENT_TOKEN_TO_BE_REPLACED

KANSAS CITY, MO (KCTV/AP) — All restrictions meant to slow the spread of the coronavirus were being rescinded as of midday Friday in Kansas City, Missouri, following guidance from the U.S. Centers for … END_OF_DOCUMENT_TOKEN_TO_BE_REPLACED