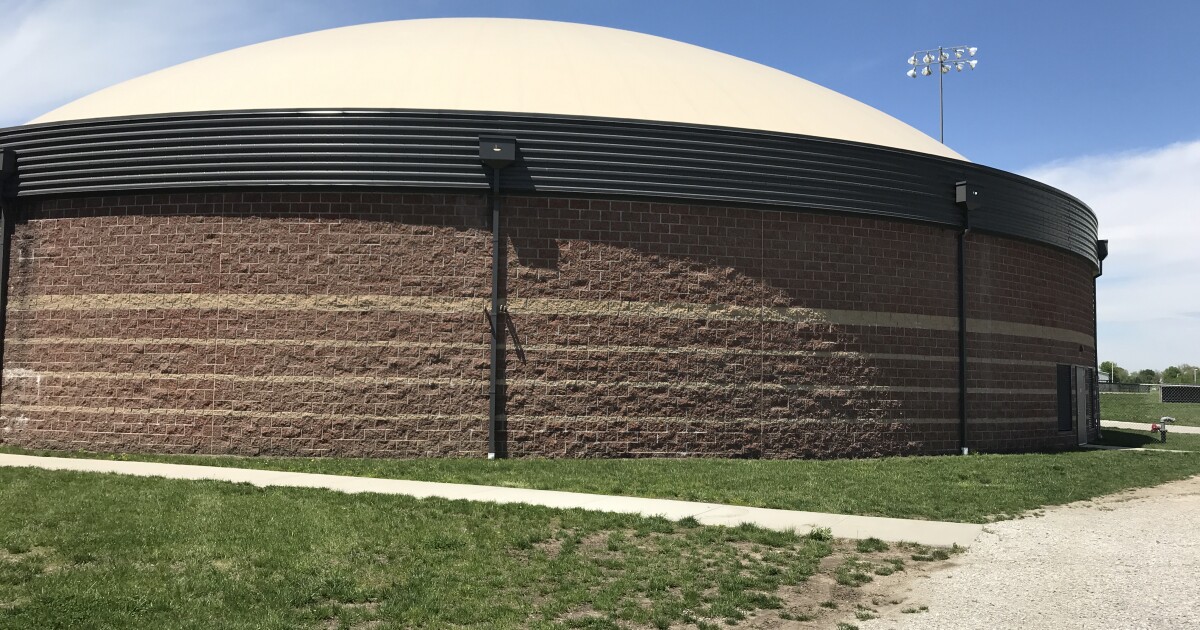 OVERLAND PARK, Kan. — Should a tornado ever strike Raymore-Peculiar High School, every student, faculty and staff member can all fit inside a shelter strong enough to withstand the most powerful EF-5 tornadoes.

As part of a larger project totaling $20 million completed in 2017, the school district in Cass County, Missouri, built a concrete dome over an auxiliary gymnasium creating the shelter space.

“Our board of education, based in part on the Joplin tragedy, felt it was important enough to make this investment. To build a facility like this so if we were ever in a similar situation, we would be safe,” Dr. Bryan Pettengill, the district’s assistant superintendent of administrative services said.

On Sunday, May 22, 2011, an EF-5 tornado hit the city of Joplin, about a two hour drive south of Raymore-Peculiar High School on Interstate 49.

Security footage from inside the city’s schools, which were empty at the time, show winds break glass, rip off ceiling tiles and blow tables across the cafeteria.

“The thought of a tornado coming, especially during times when we have all [students] together, is just a terrible thought for someone who oversees children,” admitted Pettengill, whose role includes overseeing safety and security at the district.

He explained the dome’s walls are made of solid concrete. The walls measure about two and a half feet thick at the base and roughly 14 inches thick at the top of the dome.

In March, a tornado touched down near Stillwell, Kansas, west of the high school, triggering the tornado sirens. School was out for the day, but Pettengill said student-athletes and coaches participating in outdoor sports practices all retreated to the dome until the threat passed.

“Thankfully, [the tornado] never came to fruition,” Pettengill remembers that day. “But we had a building in place for them had it came this direction.”

In a since-deleted tweet responding to a question about a potential contract extension for Kansas City Chiefs safety Tyrann Mathieu, Mathieu tweeted that he's "probably not" going to get a new deal in … END_OF_DOCUMENT_TOKEN_TO_BE_REPLACED

KANSAS CITY, Mo. — A manhole left uncovered is the source of concern after a woman damaged her car in Kansas City. The single-car crash happened at 11th Street and Tracy Avenue during the busy … END_OF_DOCUMENT_TOKEN_TO_BE_REPLACED

Kansas City, Missouri's COVID-19 emergency order was set to expire at the end of the month. But Mayor Quinton Lucas made it clear Friday that private businesses can still set their own rules.Any … END_OF_DOCUMENT_TOKEN_TO_BE_REPLACED

KANSAS CITY, MO (KCTV/AP) — All restrictions meant to slow the spread of the coronavirus were being rescinded as of midday Friday in Kansas City, Missouri, following guidance from the U.S. Centers for … END_OF_DOCUMENT_TOKEN_TO_BE_REPLACED