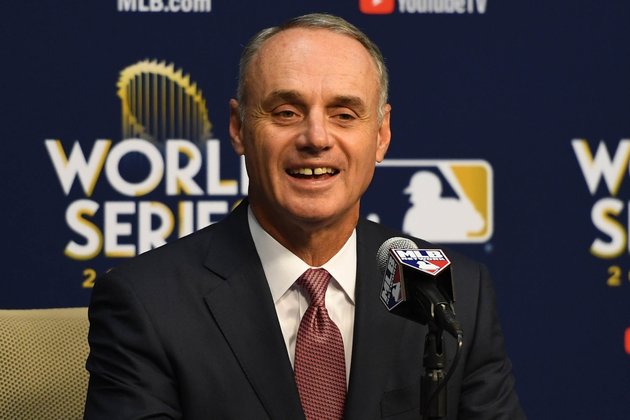 In perhaps his toughest words yet regarding the Athletics’ future in Oakland, MLB commissioner Rob Manfred said Tuesday that the process for preventing the team from leaving the Bay Area is “at the end.”

What’s more, Manfred reiterated the long-held belief that Las Vegas indeed could be in play should the A’s indeed move from Oakland.

Manfred made the comments during a QA session with the media in Denver prior to Tuesday night’s All-Star Game.

Both the league and A’s management agree that the club’s current home, the Oakland Coliseum (currently named RingCentral Coliseum) is no longer viable. The team has called the stadium home since 1968 and the Oakland City Council will meet July 20 to consider a non-binding vote on a proposal to build a new stadium at Howard Terminal, a waterfront location in downtown Oakland.

“(A’s owner) John Fisher has done everything I’ve asked him to do in terms of keeping the A’s in Oakland and more than I asked him to do in terms of financial commitment,” Manfred said. “So we’re going to know one way or another what’s going to happen in Oakland in the next couple of months. If you can’t get a ballpark, the relocation process, whether it’s Las Vegas or a broader array of cities that are considered, will take on more pace.”

“Thinking about this as a bluff is a mistake. This is the decision point for Oakland as whether they want to have Major League Baseball going forward,” Manfred added.

The club’s current lease at the Coliseum runs through 2024. The franchise began in Philadelphia in 1901 before moving to Kansas City after the 1967 season.

In a since-deleted tweet responding to a question about a potential contract extension for Kansas City Chiefs safety Tyrann Mathieu, Mathieu tweeted that he's "probably not" going to get a new deal in … END_OF_DOCUMENT_TOKEN_TO_BE_REPLACED

KANSAS CITY, Mo. — A manhole left uncovered is the source of concern after a woman damaged her car in Kansas City. The single-car crash happened at 11th Street and Tracy Avenue during the busy … END_OF_DOCUMENT_TOKEN_TO_BE_REPLACED

Kansas City, Missouri's COVID-19 emergency order was set to expire at the end of the month. But Mayor Quinton Lucas made it clear Friday that private businesses can still set their own rules.Any … END_OF_DOCUMENT_TOKEN_TO_BE_REPLACED

KANSAS CITY, MO (KCTV/AP) — All restrictions meant to slow the spread of the coronavirus were being rescinded as of midday Friday in Kansas City, Missouri, following guidance from the U.S. Centers for … END_OF_DOCUMENT_TOKEN_TO_BE_REPLACED