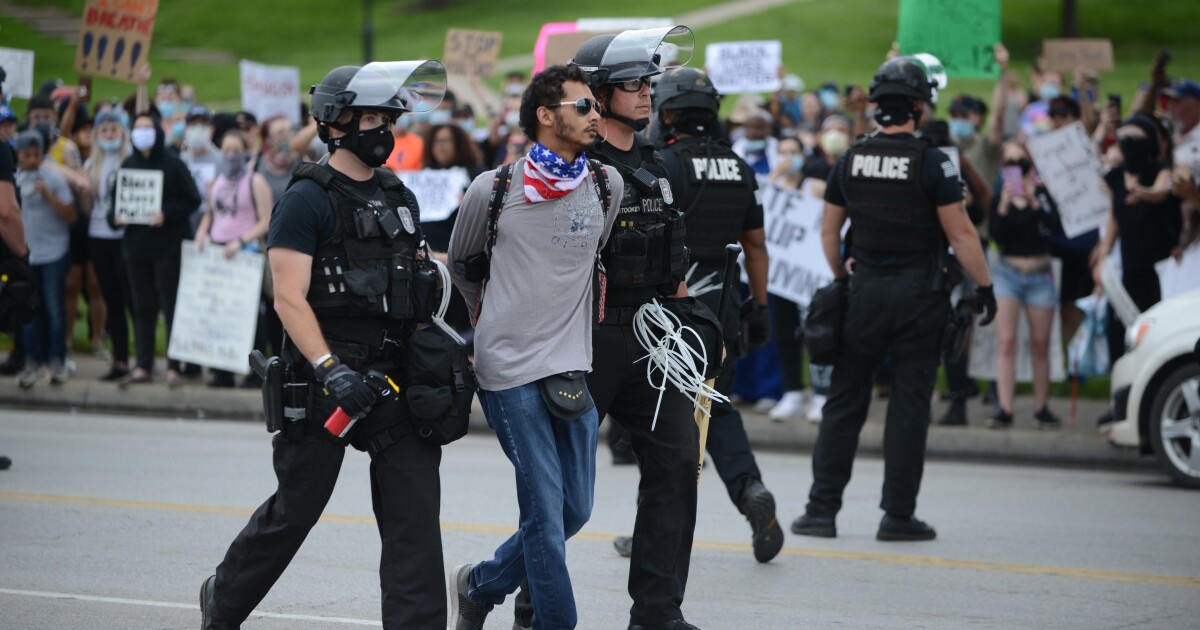 A woman who was banished from the Country Club Plaza after she was arrested last year during police brutality protests has settled her lawsuit against the Kansas City Board of Police Commissioners.

Under the settlement, Kansas City police have agreed to end their use of banishment orders, which protester Theresa Taylor had challenged as unconstitutional.

Taylor was represented by the ACLU of Missouri and the MacArthur Justice Center, which sued after Taylor was arrested and released from jail on condition that she not return to the Plaza.

“If the right to free speech means anything, it means that citizens have the right to take to the streets to voice their objections to government overreach without fear of retaliation,” Tony Rothert, Legal Director of the ACLU of Missouri, said in a statement. “Here some police officers did not like criticism and responded by abusing their authority.”

The police department did not respond to a request for comment.

Taylor was arrested during a protest demonstration in Kansas City on June 1, 2020, one of hundreds across the country provoked by the killing of George Floyd, an unarmed Black man, by Minneapolis police. The protesters were marching north on Main Street toward downtown when they were blocked by police at 31st Street. Taylor and other protesters started heading back to the Plaza when they were ordered to disperse.

Taylor was detained while standing on a sidewalk. Her hands were zip-tied and she was ordered to sit against a wall. She was detained for several hours before being told she had failed to comply with a lawful police order. After she posted $1,000 bail, police told her and other arrested protesters that if they returned to the Plaza, they’d be arrested again and held without bail.

In her lawsuit, Taylor claimed that she and the other arrested protesters were mocked and taunted by the police while they were being transported downtown.

Although the charges against Taylor were eventually dismissed, the banishment order had remained in effect.

“Now more than ever we must safeguard the right to protest from police overreach and violence – especially where protests are about the police themselves,” Amy Breihan, co-director of the MacArthur Justice Center, said in a statement.

In a since-deleted tweet responding to a question about a potential contract extension for Kansas City Chiefs safety Tyrann Mathieu, Mathieu tweeted that he's "probably not" going to get a new deal in … END_OF_DOCUMENT_TOKEN_TO_BE_REPLACED

KANSAS CITY, Mo. — A manhole left uncovered is the source of concern after a woman damaged her car in Kansas City. The single-car crash happened at 11th Street and Tracy Avenue during the busy … END_OF_DOCUMENT_TOKEN_TO_BE_REPLACED

Kansas City, Missouri's COVID-19 emergency order was set to expire at the end of the month. But Mayor Quinton Lucas made it clear Friday that private businesses can still set their own rules.Any … END_OF_DOCUMENT_TOKEN_TO_BE_REPLACED

KANSAS CITY, MO (KCTV/AP) — All restrictions meant to slow the spread of the coronavirus were being rescinded as of midday Friday in Kansas City, Missouri, following guidance from the U.S. Centers for … END_OF_DOCUMENT_TOKEN_TO_BE_REPLACED