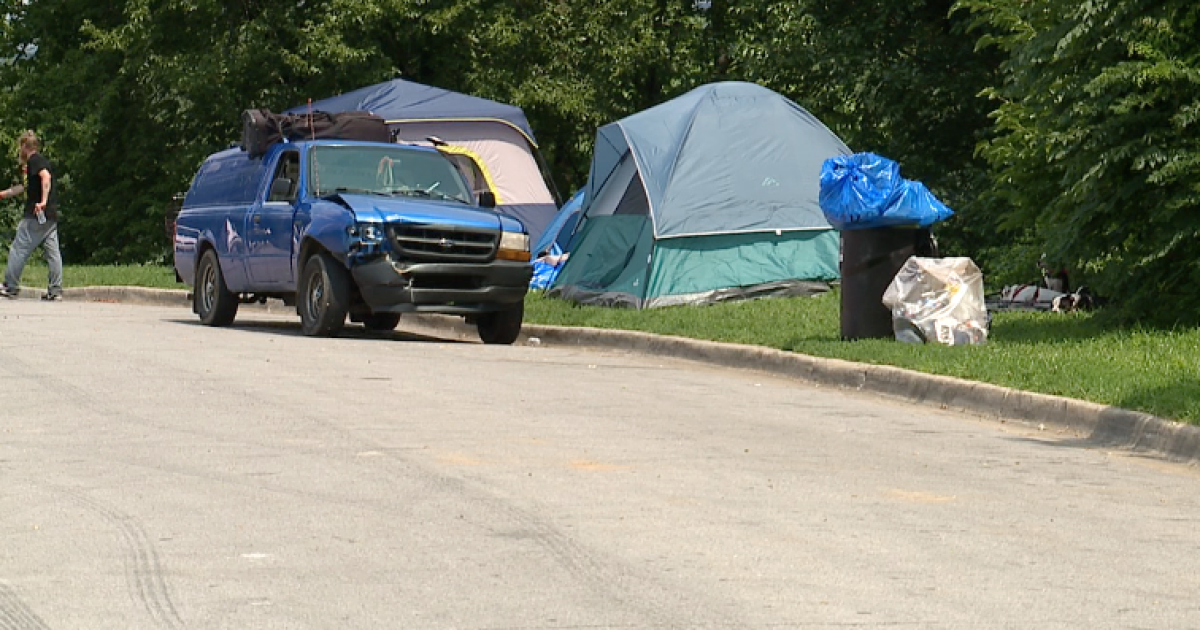 KANSAS CITY, Mo. — It’s day two for folks living at Penn Valley Park after the city bussed people out there after sweeping the second iteration of the Westport Camp Sixx on Sunday.

“I just wanted to cry ’cause I was like, I didn’t know where we were going,” Monique Snead said.

Although she was scared, Snead said on Monday she was able to fill out paperwork to get her ID and birth certificate hopefully this week.

“Things are going to get better, and I guess today things did get better,” Snead said.

Some people at Penn Valley Park are coming from the city’s 90-day hotel initiative that ended July 15.

“I got on the Independence housing list. I got a homeless letter. I was working to get an ID but it takes longer,” Will Hare said.

Hare stayed outside during the Bartle Hall warming center project in the winter. Then he stayed at Camp Sixx in Westport through the beginning of spring. Then he was sent to one of the 12 hotels in the initiative, and now he’s back to square one.

“It’s pretty hard, people just expecting it to be just like, boom there you go,” Hare said. “You’re on a list of people, it’s like section 8 housing. If you already don’t have nothing, you’re right back out here.”

Kimberly Taylor is back living in a tent. She was also in a hotel and got on a waiting list, but who knows how long it’ll take to receive a phone call or a place to live.

Kimberly Taylor is back living in a tent after the city’s hotel initiative ended. She also lived at the original Camp Sixx last winter. She said she applied for housing but is on a waiting list.

“Nobody really wants to get wrapped up in this negativity all day long,” Taylor said.

Taylor wants to do something that everyone else does on a summer day.

“We’re gonna have a barbecue today and we want to get cheered up. We’re tired of going through this crap,” Taylor said.

Since the wintertime, folks have been bussed to a new location about every three months with more people getting lost each time. The pressing question now is what comes next to get people stabilized.

Lotus Care House partnered with the city for the hotel initiative providing casework services, and their contract just ended.

Lotus staff plans to be at the Central Library on Tuesday and Thursday for the next month providing ongoing case management and coordination for the hotel participants and anyone who needs it.

The folks who didn’t get into a program during that 90 days are now spread out around town.

“We will coordinate with Lotus as they do outreach with the encampments to let them know here’s our services and here’s what we can provide,” said Terri Megli with City Union Mission.

Megli said 47 people from the hotels came to their family center and five to their L. Minor center for specialized needs.

City Union Mission has 150 beds open in their men’s shelter but the family center is at capacity.

“We’re going to provide a linear pathway to move out of poverty and into upward mobility, into a stable job and stable housing,” Megli said. “But it’s going to take some time because the homeless didn’t become homeless overnight, so there are some root causes they need to address.”

Megli said he thinks all the service providers and the city need to come up with a new strategic plan. He said preventative issues are key and combating the ongoing problem with evictions in Kansas City will take time.

Mayor Quinton Lucas, who is also on the city’s special housing committee, did not have time to speak with KSHB 41 News on Monday.

However, Lucas’s office said the Verge pallet tiny home project will be on the finance committee’s agenda Wednesday and the office plans to testify. City council members continue to push back or hold any decision on the project each week.

Lucas’s office also said two other pieces of legislation will be discussed at a committee meeting on Wednesday at 10 a.m., which, as of Monday afternoon, has not been listed on any agenda on the City Clerk’s web page.

In a since-deleted tweet responding to a question about a potential contract extension for Kansas City Chiefs safety Tyrann Mathieu, Mathieu tweeted that he's "probably not" going to get a new deal in … END_OF_DOCUMENT_TOKEN_TO_BE_REPLACED

KANSAS CITY, Mo. — A manhole left uncovered is the source of concern after a woman damaged her car in Kansas City. The single-car crash happened at 11th Street and Tracy Avenue during the busy … END_OF_DOCUMENT_TOKEN_TO_BE_REPLACED

Kansas City, Missouri's COVID-19 emergency order was set to expire at the end of the month. But Mayor Quinton Lucas made it clear Friday that private businesses can still set their own rules.Any … END_OF_DOCUMENT_TOKEN_TO_BE_REPLACED

KANSAS CITY, MO (KCTV/AP) — All restrictions meant to slow the spread of the coronavirus were being rescinded as of midday Friday in Kansas City, Missouri, following guidance from the U.S. Centers for … END_OF_DOCUMENT_TOKEN_TO_BE_REPLACED