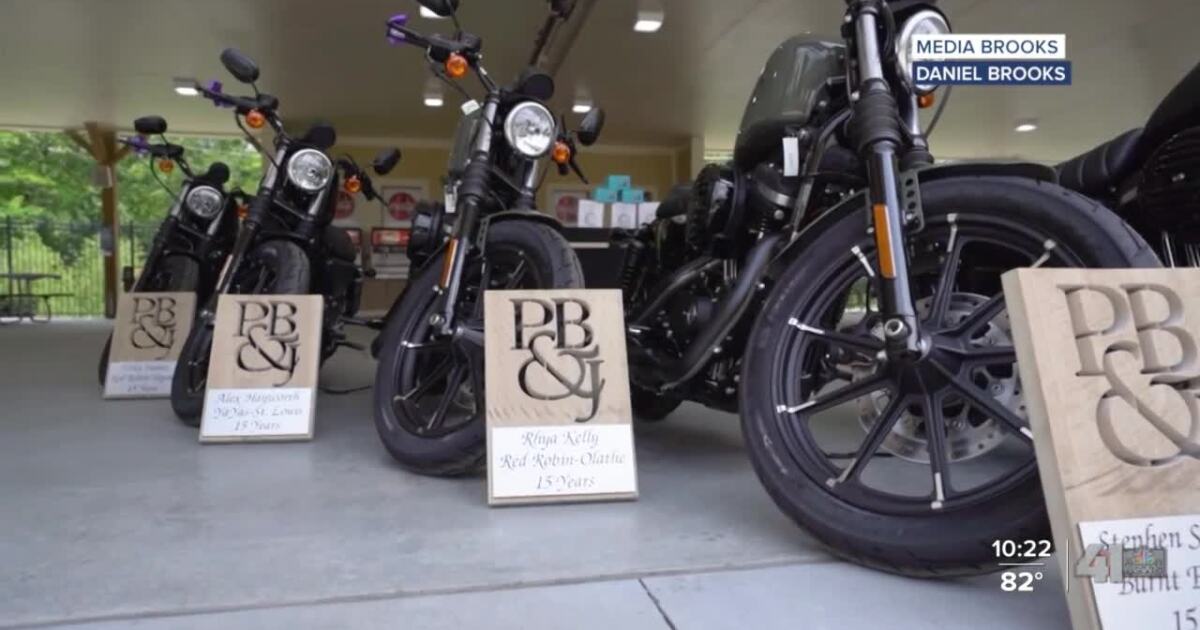 KANSAS CITY, Mo. — Michael Hampton and Walter Mansfield have given 15 years of service to PB&J Restaurant Group. And in return, they each received a Harley Davidson motorcycle.

“Fifteen years is a long time, and instead of a check or watch or something, this Harley is like the coolest thing you can get,” said Paul Khoury, chief executive officer of PB&J Restaurant Group.

Mansfield, a waiter at Yayas Euro Bistro, is one of 12 employees who was gifted a motorcycle.

“If I said I was going to be there 15 years later, I would have thought that was not going to happen,” Mansfield said.

Hampton, a bartender and catering manager at Burnt Ends BBQ, said much the same.

Khoury said his gratitude for the loyalty of his employees prompted him to reward them with the motorcycles.

“It’s like a big family, you know PB&J’s has always been, ‘If you take care of PB&J, PB&J will take care of you and your family,’” Khoury said.

While many employers had a tough time keeping their doors open – and employees on the payroll – amid the COVID-19 pandemic, Hampton said it was an easy decision to stick with PB&J.

“I wanted to help however I could, so if that meant going on and putting on masks and gloves and running food out to people’s car, it was just the way we had to do it for a while,” Hampton said.

“During the pandemic, it was difficult,” he said. “We would help with the carry out portion because they were still doing the to-go food. So it was interesting going in there, packing up the to-go food with a mask on all that other stuff.”

Now 15 years later, it’s like riding a motorcycle – no road is too long if there’s good company along the way.

“I feel blessed that I am able to be a part of it,” Hampton said. “To be be a part of what they are doing, and that I was able to get it when I got it in and that I’ve stuck with it as long as I have.”

Similarly, Mansfield said the fact that he has remained with PB&J for 15 years “tells you a lot about what the company is like.”

In a since-deleted tweet responding to a question about a potential contract extension for Kansas City Chiefs safety Tyrann Mathieu, Mathieu tweeted that he's "probably not" going to get a new deal in … END_OF_DOCUMENT_TOKEN_TO_BE_REPLACED

KANSAS CITY, Mo. — A manhole left uncovered is the source of concern after a woman damaged her car in Kansas City. The single-car crash happened at 11th Street and Tracy Avenue during the busy … END_OF_DOCUMENT_TOKEN_TO_BE_REPLACED

Kansas City, Missouri's COVID-19 emergency order was set to expire at the end of the month. But Mayor Quinton Lucas made it clear Friday that private businesses can still set their own rules.Any … END_OF_DOCUMENT_TOKEN_TO_BE_REPLACED

KANSAS CITY, MO (KCTV/AP) — All restrictions meant to slow the spread of the coronavirus were being rescinded as of midday Friday in Kansas City, Missouri, following guidance from the U.S. Centers for … END_OF_DOCUMENT_TOKEN_TO_BE_REPLACED