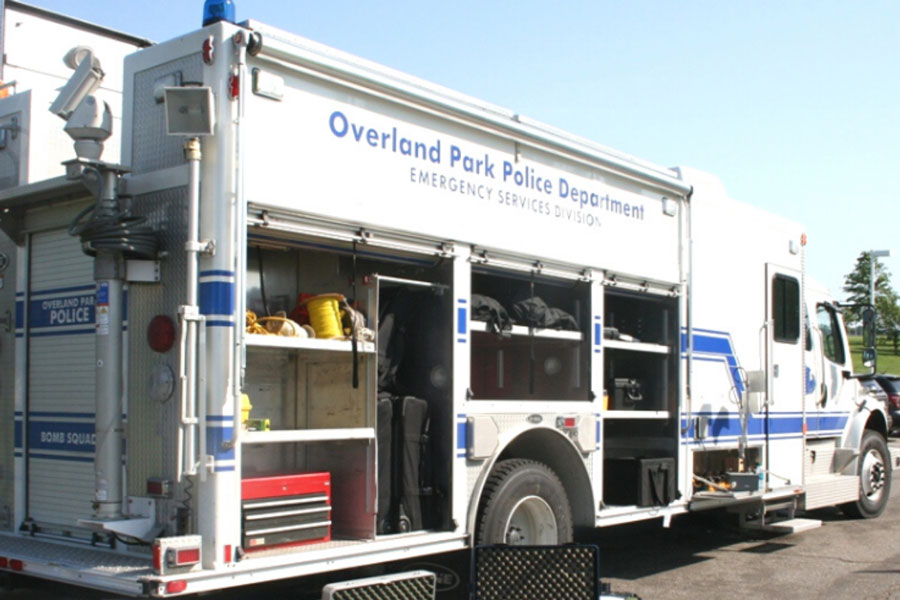 The replacement of Overland Park’s explosives disposal truck — which has been asked for since 2018 — is once again on the long-range spending plan for the city budget.

If ultimately approved, the purchase of a new “bomb truck” would come out of the $11.6 million the city would spend over five years from sales tax revenue generated by the new county courthouse.

Among other reasons, the Overland Park Police Department and City Manager Bill Ebel have wanted to replace the city’s 16-year-old explosives disposal truck because of an exhaust problem that causes some fumes to get into the area where officers work.

“Like any vehicle that is 16 years old, the current (explosives ordnance disposal) vehicle has technology deficiencies,” said Sean Reilly, spokesman for the city.

A new truck would be bigger and have more current technology, Reilly said. The truck carries equipment that includes an X-ray machine and a robot that can transmit videos remotely in dangerous situations.

The current vehicle was purchased with federal money and is used to support other local cities and Johnson County when explosives might be present.

Overland Park’s department is the only police agency in Johnson County to have a “bomb truck,” and the city also works with the FBI and the federal Bureau of Alcohol, Tobacco and Firearms.

Last year the truck went out on 94 calls. Of those, 36 resulted in safe disposal of suspicious devices, Reilly said.

The other 24 calls were when explosive ordnance technicians accompanied SWAT teams as a precaution.

If approved, the truck would be purchased with money from the city’s share of a temporary, special sales tax to build the new county courthouse in Olathe.

The capital improvements budget is a priority list of spending for the coming five years and is not a final decision. The bomb truck, for instance, has appeared in four recent budgets but has yet to be purchased.

In a since-deleted tweet responding to a question about a potential contract extension for Kansas City Chiefs safety Tyrann Mathieu, Mathieu tweeted that he's "probably not" going to get a new deal in … END_OF_DOCUMENT_TOKEN_TO_BE_REPLACED

KANSAS CITY, Mo. — A manhole left uncovered is the source of concern after a woman damaged her car in Kansas City. The single-car crash happened at 11th Street and Tracy Avenue during the busy … END_OF_DOCUMENT_TOKEN_TO_BE_REPLACED

Kansas City, Missouri's COVID-19 emergency order was set to expire at the end of the month. But Mayor Quinton Lucas made it clear Friday that private businesses can still set their own rules.Any … END_OF_DOCUMENT_TOKEN_TO_BE_REPLACED

KANSAS CITY, MO (KCTV/AP) — All restrictions meant to slow the spread of the coronavirus were being rescinded as of midday Friday in Kansas City, Missouri, following guidance from the U.S. Centers for … END_OF_DOCUMENT_TOKEN_TO_BE_REPLACED