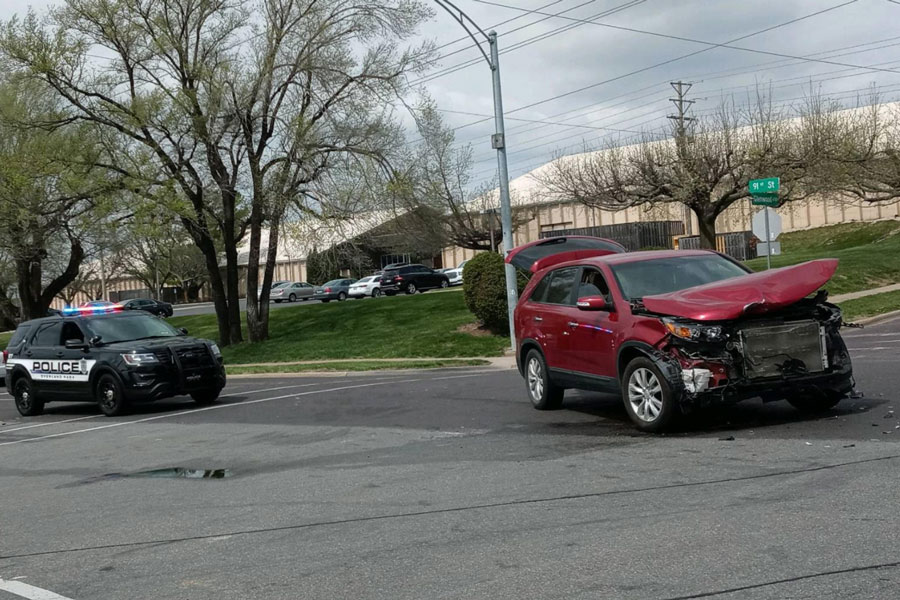 The city of Overland Park announced on Wednesday that it would install four “high-profile” stop signs with flashing LED lights around their edges at the intersection of 91st and Glenwood, which has been the site of a slew of accidents since the city deactivated traffic lights there last fall.

Why it matters: The announcement comes a week and a half after a motorcycle and SUV collided at the intersection, leaving the drivers with minor injuries.

That was the the 10th accident at the intersection since October 2020, when city staff recommended removing two traffic signals along 91st Street on the grounds that there wasn’t enough traffic along the stretch to justify them.

There had been a total of eight accidents at that intersection in the three years prior.

A heavily damaged vehicle sits in the intersection of 91st and Glenwood after a wreck in April. The driver suffered a leg injury, according to police. Photo courtesy Donna Palatas.

Past debates: Accident volume picked up at the intersection soon after normal traffic light function was suspended.

Councilmembers Faris Farassati and Scott Hamblin voted against the removal of the signals at the time.

In the release announcing the changes, City Traffic Engineer Brian Shields said that the city had identified the contributing factors for many of the crashes at the intersection — which included an ice patch and a student driver.

Quotable: “Over two million vehicles have successfully passed through this intersection since the signal was deactivated, not counting the ten drivers that caused crashes,” Shields said. “Although circumstances for several crashes can be explained, we’re taking a holistic approach to ensure the safety of all drivers.”

What happens next: Overland Park plans to have the new stop signs installed by mid-July. Solar-powered LED lights around the perimeter of each sign will blink 24 hours a day, part of an effort to ensure motorists don’t miss the new stop signs.

In a since-deleted tweet responding to a question about a potential contract extension for Kansas City Chiefs safety Tyrann Mathieu, Mathieu tweeted that he's "probably not" going to get a new deal in … END_OF_DOCUMENT_TOKEN_TO_BE_REPLACED

KANSAS CITY, Mo. — A manhole left uncovered is the source of concern after a woman damaged her car in Kansas City. The single-car crash happened at 11th Street and Tracy Avenue during the busy … END_OF_DOCUMENT_TOKEN_TO_BE_REPLACED

Kansas City, Missouri's COVID-19 emergency order was set to expire at the end of the month. But Mayor Quinton Lucas made it clear Friday that private businesses can still set their own rules.Any … END_OF_DOCUMENT_TOKEN_TO_BE_REPLACED

KANSAS CITY, MO (KCTV/AP) — All restrictions meant to slow the spread of the coronavirus were being rescinded as of midday Friday in Kansas City, Missouri, following guidance from the U.S. Centers for … END_OF_DOCUMENT_TOKEN_TO_BE_REPLACED