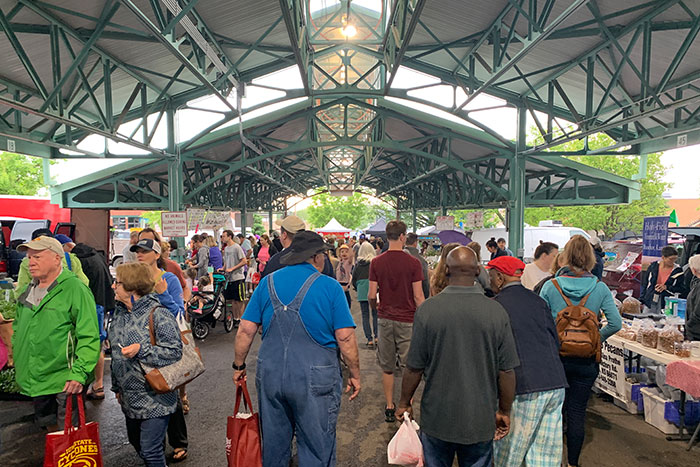 Overland Park city councilmembers sought to reassure the public Wednesday that no redesign of the Overland Park Farmers’ Market will happen without extensive public input.

After a disagreement about how and when that input will happen, a council committee green lit having city staff seek ideas about how the market’s space at its downtown pavilion could be made more flexible for year-round use.

The decision to go forward will be the first step in what is likely to be a long process that could end in any number of possibilities for the future of the market area.

What’s sure is that the market will stay downtown, but councilmembers expressed interest in finding out if the pavilion area might be enclosed or combined with private property in a mixed-use area including retail or apartments.

“Literally nothing is on or off the table,” said Councilmember Fred Spears, the chairman of the council’s Community Development Committee.

Committee members acknowledged that any discussion of changes to the popular farmers’ market is likely to come with public trepidation.

A proposal four years ago to move the market to what was then Santa Fe Commons Park — since renamed Thompson Park — produced months of heated exchanges before the council decided to keep the market where it is, adjacent to the Clock Tower downtown.

But that decision left some loose ends.

The market pavilion has an inadequate electrical system and sits on a slope that makes it difficult for people with mobility issues. Since it is exposed on all sides to the elements, it’s only possible to use it seasonally, and it gives way to parking in the cold months.

So the city made a long-range plan for a $5.4 million upgrade of the market in its pavilion location.

The outreach to developers is intended to find out whether more ambitious changes could be made. The council’s 2017 study listed some possibilities to reconfigure and enclose parts of the market using city property near it, but they did not include a partnership with private business.

Nearly everything about the market — from the decision to keep it temporarily at Matt Ross Community Center this season, to the idea of creating public-private partnership with developers — prompts strong opinions in Overland Park.

Councilmembers on Wednesday tried to allay the public’s fears.

“We are not writing a check, we’re not signing on the dotted line,” Skoog said. “We are asking people to give us creative solutions on how we can make the farmers’ market so outstanding. Because we all know the farmer’s market is a gem in this city and nobody wants to damage it, let alone stifle it.”

“What we have now is great. But let’s not be stagnant for the next thirty years. Let’s do something great with this amazing asset,” Grummert said. “We’re going to take a deep breath and be open to a cool new concept.”

Skoog and Spears stressed that the city has always taken public engagement seriously and will have a robust discussion with residents when the city staff’s work is further along.

But Councilmember Faris Farassati said the public, especially residents living near the market, should have more input earlier in the process.

The plan now is for staff and the consultant to work together to winnow the best ideas. The residents and merchants would have a chance to weigh in after that.

Farassati said he is not taking a position on how the market should be designed, only that the city should not depend on a developer to do all the public outreach.

“That party is conflicted,” he said.

The status of the market this summer

Not discussed at Wednesday’s meeting was the decision to keep the market at Matt Ross Community Center again this year.

It was originally moved to the center’s parking lot last year to allow enough space for customers to socially distance themselves during the pandemic, and the city decided to keep it there again this season.

Now that the coronavirus appears to be ebbing, a small group of downtown merchants have started a petition to have the market moved back to its permanent home at the pavilion.

The market brings a surge in foot traffic on Wednesdays and Saturdays during the selling season, the businesses’ petition says, and they have suffered from the loss of that.

But not everyone involved in the farmers’ market agrees.

Ryan Eddinger, a market vendor from Two Sisters Farm in Lawrence, said the temporary community center location — which is about two blocks from the pavilion — has been tremendously successful with record numbers of customers.

The farmers who sell at the market, Eddinger says, would be hurt by a move back because customers still may not be comfortable with less spacing at the pavilion.

“We farmers and vendors were also hit hard by the pandemic and while I certainly feel for those who have lost their businesses or are still struggling, I cannot sit quietly and allow a small group of business owners to go unchallenged as they attempt to negatively affect the operation of nearly 90 other businesses in order to bail them out of their particular circumstances,” Eddinger wrote in an email to the Shawnee Mission Post.

However, there may be some room for cooperation.

Eddinger said he’d be willing to put up signs and fliers pointing customers to the downtown businesses.

In the mean time, Joshua Turpin, the owner of Brew Lab and an organizer of the petition drive to return the market to the pavilion, acknowledged that a year-round market facility could be beneficial to businesses in the long run.

In a since-deleted tweet responding to a question about a potential contract extension for Kansas City Chiefs safety Tyrann Mathieu, Mathieu tweeted that he's "probably not" going to get a new deal in … END_OF_DOCUMENT_TOKEN_TO_BE_REPLACED

KANSAS CITY, Mo. — A manhole left uncovered is the source of concern after a woman damaged her car in Kansas City. The single-car crash happened at 11th Street and Tracy Avenue during the busy … END_OF_DOCUMENT_TOKEN_TO_BE_REPLACED

Kansas City, Missouri's COVID-19 emergency order was set to expire at the end of the month. But Mayor Quinton Lucas made it clear Friday that private businesses can still set their own rules.Any … END_OF_DOCUMENT_TOKEN_TO_BE_REPLACED

KANSAS CITY, MO (KCTV/AP) — All restrictions meant to slow the spread of the coronavirus were being rescinded as of midday Friday in Kansas City, Missouri, following guidance from the U.S. Centers for … END_OF_DOCUMENT_TOKEN_TO_BE_REPLACED