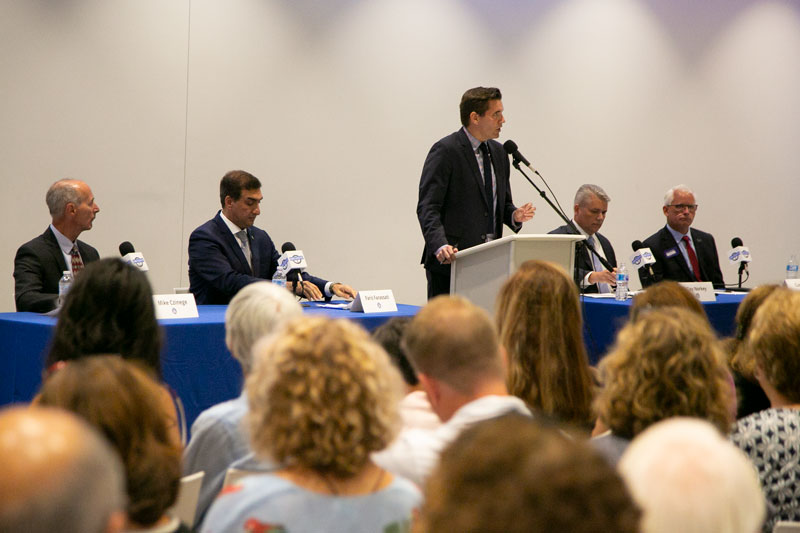 With local primary elections only three weeks away the race for mayor of Overland Park intensified this month.

Since the July 4 holiday, spats have broken out over political yard signs and one candidate’s absence from a city council committee meeting.

Most recently, Skoog went on the offensive about the absence of Farassati from the city’s council’s Community Development committee meeting on Wednesday, July 7. Both sit on the committee, which meets once a month.

Farassati had said before the July meeting that he would miss it because he would be out of town and had asked councilmember Scott Hamblin to fill in for him.

However, he ended up not going out of town. Instead, he attended a Ward 1 council forum hosted by the Shawnee Mission Post. Farassati represents Ward 5.

Skoog, who represents Ward 2 on the city council, made note of Farassati’s absence the night of July 7.

“I find it interesting that he would choose to miss one of the most important votes of the (committee’s) year, which is the budget, to go to a campaign event,” Skoog said at the meeting.

His remark sparked a brief back-and-forth with Hamblin, who attempted to explain Farassati’s absence but was cut off.

“I know you don’t want to hear the truth, do you?” Hamblin said.

“I always want to hear the truth. I just don’t hear it from you very often,” Skoog replied.

On Monday, Farassati said Skoog’s comment amounted to campaigning from the dais and should not be allowed.

He acknowledged that he had emailed councilmember Fred Spears, the committee chairman, that he would be out of town on the evening of the July 7 meeting, but said he had problems rebooking plane tickets for a family vacation.

Farassati says his family had been scheduled to fly out of Kansas City for South Carolina that morning, for a weekend getaway. But they decided to try and book another flight elsewhere because of incoming Hurricane Elsa, which was moving over Florida at the time.

After several hours of trying, nothing was available so they decided to give up on the getaway and go home. Farassati said since Hamblin was already going to the meeting in his place, he went to watch the Ward 1 forum at the Johnson County Arts & Heritage Center.

Farassati characterized Skoog’s remarks as a personal attack and said campaigning is not allowed from the dais.

“When people feel like they are behind in public opinion, when they feel like their message is not getting through, then they start going after personal matters,” he said. “They try to distract the voter with that. At some point, if the dais is being used for campaigning, I would like to warn him that it’s against the law, and we will take action to stop it.”

Skoog, however, did not back down when contacted about it Monday.

Farassati could still have made it to the committee meeting, he said. Asking Hamblin to substitute meant that Farassati’s Ward 5 constituents were not represented, he added. (Hamblin represents from Ward 6.)

“This is not complicated at all,” Skoog said. “We were elected to represent our constituents and he chose not to do it. It’s that simple.”

As for campaigning from the dais, Skoog said: “Your opponents are free to say how many meetings you’ve missed.”

The to-do over meeting attendance closely followed separate complaints that yard signs supporting Farassati were being removed or obscured along Overland Park roadways.

Norkey said he became aware of the complaint after a user posted it on Reddit.

After some investigation, Norkey said he had a talk with the teenage volunteers, warning them not to touch the signs of other candidates. He said he also reached out to Farassati immediately afterward but did not get a response.

Later, Norkey wrote on Farassati’s Facebook page that his campaign did not condone the actions done by the young volunteers.

“I regret the actions of these first-time volunteers and sincerely apologize to Dr. Farassati. I hope he understands that my campaign team and I made a prompt and sincere effort to address this incident,” Norkey wrote.

Farassati maintains the obscuring of his signs is ongoing and has continued through last weekend, but there have been no more witness reports since the holiday incident.

Farassati’s campaign filed a police report, he said, to discourage what amounts to suppression of freedom of speech.

“Yes, it happens every year but it doesn’t mean we have to tolerate it every year,” he said. “If a wrong thing is happening frequently that doesn’t make it right.”

In a since-deleted tweet responding to a question about a potential contract extension for Kansas City Chiefs safety Tyrann Mathieu, Mathieu tweeted that he's "probably not" going to get a new deal in … END_OF_DOCUMENT_TOKEN_TO_BE_REPLACED

KANSAS CITY, Mo. — A manhole left uncovered is the source of concern after a woman damaged her car in Kansas City. The single-car crash happened at 11th Street and Tracy Avenue during the busy … END_OF_DOCUMENT_TOKEN_TO_BE_REPLACED

Kansas City, Missouri's COVID-19 emergency order was set to expire at the end of the month. But Mayor Quinton Lucas made it clear Friday that private businesses can still set their own rules.Any … END_OF_DOCUMENT_TOKEN_TO_BE_REPLACED

KANSAS CITY, MO (KCTV/AP) — All restrictions meant to slow the spread of the coronavirus were being rescinded as of midday Friday in Kansas City, Missouri, following guidance from the U.S. Centers for … END_OF_DOCUMENT_TOKEN_TO_BE_REPLACED