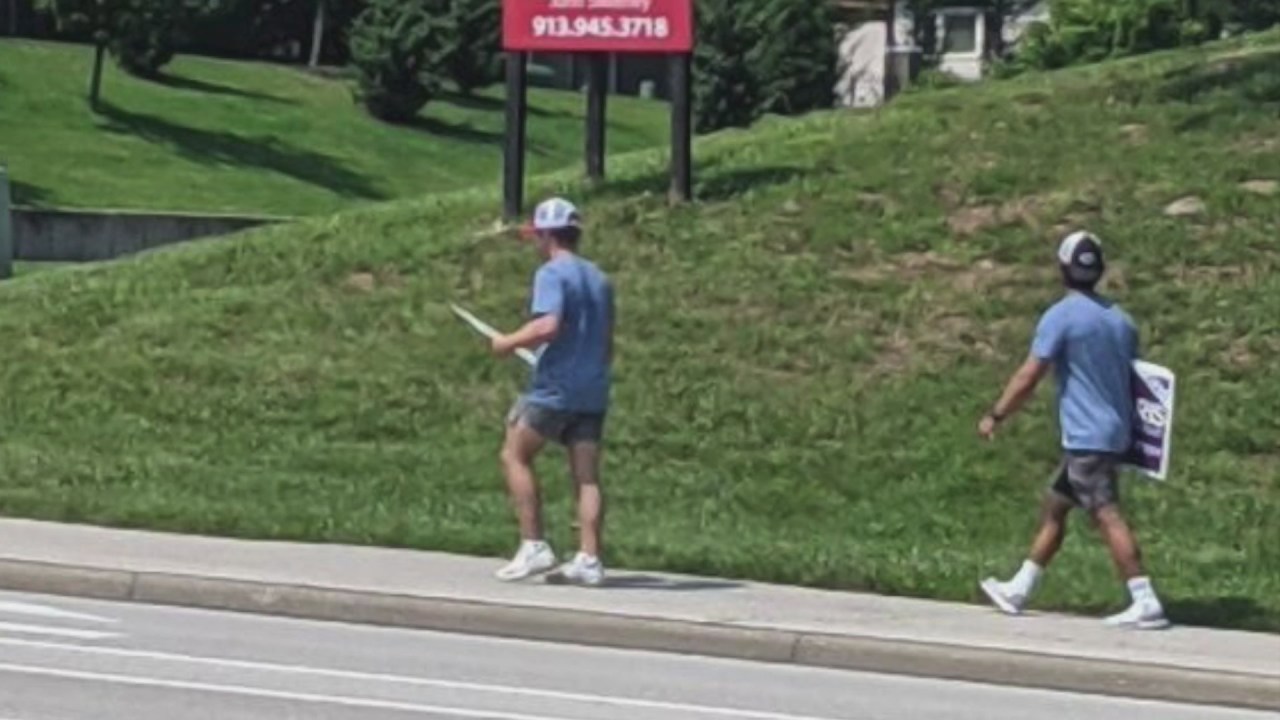 OVERLAND PARK, Kan. — The race for Overland Park mayor is heating up. Sign stealing is at the center of the most recent controversy.

Philips and a friend, who both live in Kansas City, Missouri, were riding their bikes along the Indian Creek Trail near 127th and  Nall when they confronted the two people they saw stealing political signs. The guys ran off and threw the signs in bushes near the intersection but not before Phillips’ friend snapped a photo of them. In the photo one of the guys is seen carrying what Phillips said is a Norkey sign, the other has a Farassati sign tucked under his arm, which they removed from the ground.

“It seems like they might do anything that they really wanted to win the race,” Phillips said.

“They literally were just taking up Farassati signs and the exact same spot placing them down for Mr. Norkey,” he said. “I would hope that our city was better than that.”

Clay Norkey is an attorney running for Overland Park Mayor. One of his opponents is current city councilman Dr. Faris Farassati.

Farassati said he found out about the sign stealing through social media and it is not the first time he has been targeted. Overland Park Police confirmed that they have identified a suspect in a previous political sign stealing incident and are looking into Sunday’s incident. They hope traffic cameras at the intersection will help lead them to Norkey’s volunteers.

“These actions are uncalled for,” Farassati said. “It comes from a lack of understanding of the nature of these elections and I believe that it’s an insult to the people of Overland Park. I hope they correct their ways.”

Norkey said he reached out to Farassati when he found out about the incident and his team replaced Farassati’s signs.

“This is not activity that we condone,” Norkey said. When asked why Farassati was targeted, Norkey replied, “I do not know. I know sign tampering has become an issue in these elections, it’s not appropriate whatsoever but I do not know.”

Norkey said his volunteers are minors and new to his campaign, they no longer work for him.

“Mistakes will be made, passions run high, I get that it’s not appropriate at all.” Norkey said. “That’s why we have to take steps to address it when we learn about it.”

Norkey said he does not know who the volunteers were, but he will cooperate with the police investigation.

In a since-deleted tweet responding to a question about a potential contract extension for Kansas City Chiefs safety Tyrann Mathieu, Mathieu tweeted that he's "probably not" going to get a new deal in … END_OF_DOCUMENT_TOKEN_TO_BE_REPLACED

KANSAS CITY, Mo. — A manhole left uncovered is the source of concern after a woman damaged her car in Kansas City. The single-car crash happened at 11th Street and Tracy Avenue during the busy … END_OF_DOCUMENT_TOKEN_TO_BE_REPLACED

Kansas City, Missouri's COVID-19 emergency order was set to expire at the end of the month. But Mayor Quinton Lucas made it clear Friday that private businesses can still set their own rules.Any … END_OF_DOCUMENT_TOKEN_TO_BE_REPLACED

KANSAS CITY, MO (KCTV/AP) — All restrictions meant to slow the spread of the coronavirus were being rescinded as of midday Friday in Kansas City, Missouri, following guidance from the U.S. Centers for … END_OF_DOCUMENT_TOKEN_TO_BE_REPLACED