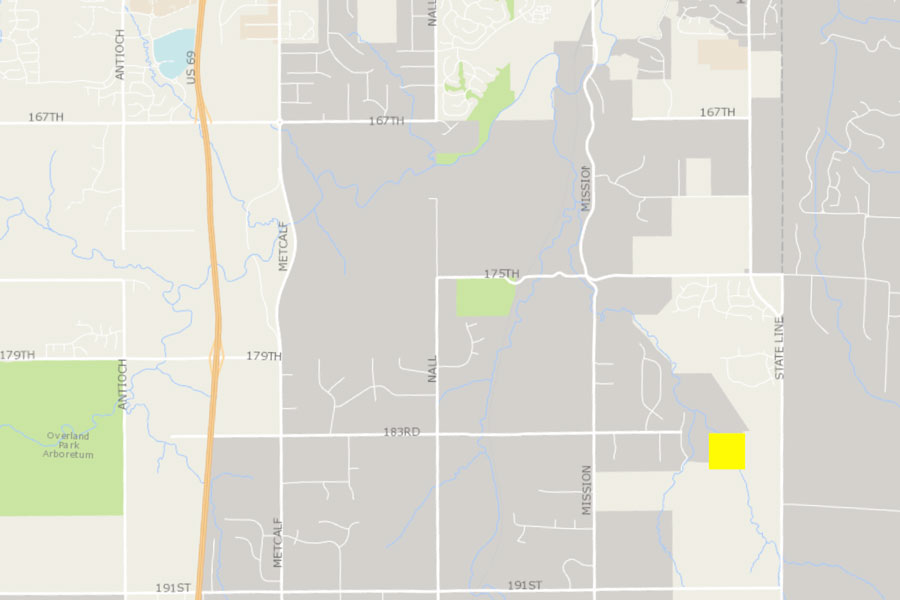 Overland Park has taken the first step toward another annexation, albeit a small one involving only one property owner.

Last Wednesday, the city council’s Community Development Committee unanimously voted to recommend that about 29 acres south of 183rd Street and east of Aberdeen Street near the state line be annexed for an eventual development of single family homes.

The request was made by the property owner, Sundance Land and Cattle II.

That company was formed in Kansas a year ago, with developer Brian Rodrock listed as agent, according to records with the Secretary of State’s office. Rodrock is CEO of Rodrock Development.

The city of Overland Park advanced a plan to annex 29 acres of land southeast of 183rd Street and Aberdeen Street near State Line Road in the far southeast part of the city. Above, the annexed plot is outlined in red. Image via Overland Park city documents.

The area set to be incorporated is currently zoned for agriculture and single family homes with a 10-acre minimum lot size.

If the annexation is eventually approved, the owners will ask for a rezoning for that property plus another to the east for homes on at least one-acre lots.

Most of the area north and west of the proposed annexation is unincorporated and includes developments of homes on large lots and some farms and agricultural operations.

The borders of Overland Park south of  167th Street in that area create an inverted U between Metcalf and State Line, with a sliver of annexed territory hugging the border but physically separate from the rest of the city.

The proposed annexation would add to that narrow city area along State Line.

Past annexation battles in court

The matter was approved with little discussion, although committee members sought reassurance that the annexation would be completely voluntary under state law.

A 2008 Overland Park annexation that was the subject of a lawsuit was controversial enough that it prompted state lawmakers to enact new restrictions on the annexation process.

Since 2012, annexations have had to be approved by a vote of the affected property owners.

But since the sole property owner asked the city for the annexation of a piece of land sharing part of its border with the city, the annexation can be considered voluntary.

Overland Park has done this type of annexation two or three times in the past decade, said Steve Horner, senior assistant city attorney.

The land addition is a multi-step process. The matter has to go before the county commission and a public hearing must be held before Overland Park councilmembers make their final vote.

They are not obligated to go through with the annexation even at that point.

In a since-deleted tweet responding to a question about a potential contract extension for Kansas City Chiefs safety Tyrann Mathieu, Mathieu tweeted that he's "probably not" going to get a new deal in … END_OF_DOCUMENT_TOKEN_TO_BE_REPLACED

KANSAS CITY, Mo. — A manhole left uncovered is the source of concern after a woman damaged her car in Kansas City. The single-car crash happened at 11th Street and Tracy Avenue during the busy … END_OF_DOCUMENT_TOKEN_TO_BE_REPLACED

Kansas City, Missouri's COVID-19 emergency order was set to expire at the end of the month. But Mayor Quinton Lucas made it clear Friday that private businesses can still set their own rules.Any … END_OF_DOCUMENT_TOKEN_TO_BE_REPLACED

KANSAS CITY, MO (KCTV/AP) — All restrictions meant to slow the spread of the coronavirus were being rescinded as of midday Friday in Kansas City, Missouri, following guidance from the U.S. Centers for … END_OF_DOCUMENT_TOKEN_TO_BE_REPLACED