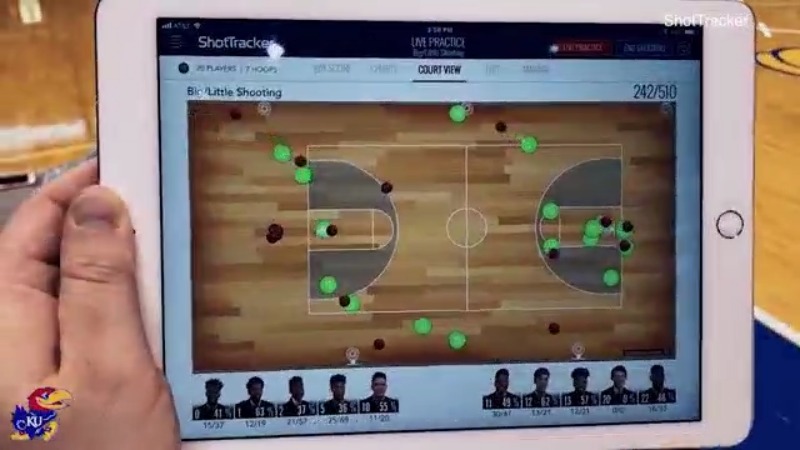 The company will provide data tracking technology for the conference’s men’s and women’s basketball programs.

“We’re just getting started. There’s a lot of work to be done, but we’re excited about this opportunity,” ShotTracker co-founder and president Davyeon Ross said.

“The technology provides enhancements for all of our men’s and women’s basketball programs,” Big 12 Executive Associate Commissioner Jeff Jackson said in a press release.

The technology tracks data in three parts by placing sensors on players, inside a ball, and around the arenas. It’s been a game-changer for coaches and players.

“Not only did we change the game from giving the coaches and players insights in real time to help them make decisions while the game is going on versus after the game,” Ross told FOX4. “Then there are other constituents, too. It actually helps the streamline of broadcast integration by being able to ingest this data, the experience.”

Ross said it also changes the fan experience, allowing them to track analytics in real time through an app.

“Being able to provide that real time data to fans, whether they’re in-stadium or at home. There’s a lot of benefit and some real exciting times,” Ross said.

Ross and Bruce Ianni co-founded the ShotTracker company in 2013.

In a since-deleted tweet responding to a question about a potential contract extension for Kansas City Chiefs safety Tyrann Mathieu, Mathieu tweeted that he's "probably not" going to get a new deal in … END_OF_DOCUMENT_TOKEN_TO_BE_REPLACED

KANSAS CITY, Mo. — A manhole left uncovered is the source of concern after a woman damaged her car in Kansas City. The single-car crash happened at 11th Street and Tracy Avenue during the busy … END_OF_DOCUMENT_TOKEN_TO_BE_REPLACED

Kansas City, Missouri's COVID-19 emergency order was set to expire at the end of the month. But Mayor Quinton Lucas made it clear Friday that private businesses can still set their own rules.Any … END_OF_DOCUMENT_TOKEN_TO_BE_REPLACED

KANSAS CITY, MO (KCTV/AP) — All restrictions meant to slow the spread of the coronavirus were being rescinded as of midday Friday in Kansas City, Missouri, following guidance from the U.S. Centers for … END_OF_DOCUMENT_TOKEN_TO_BE_REPLACED