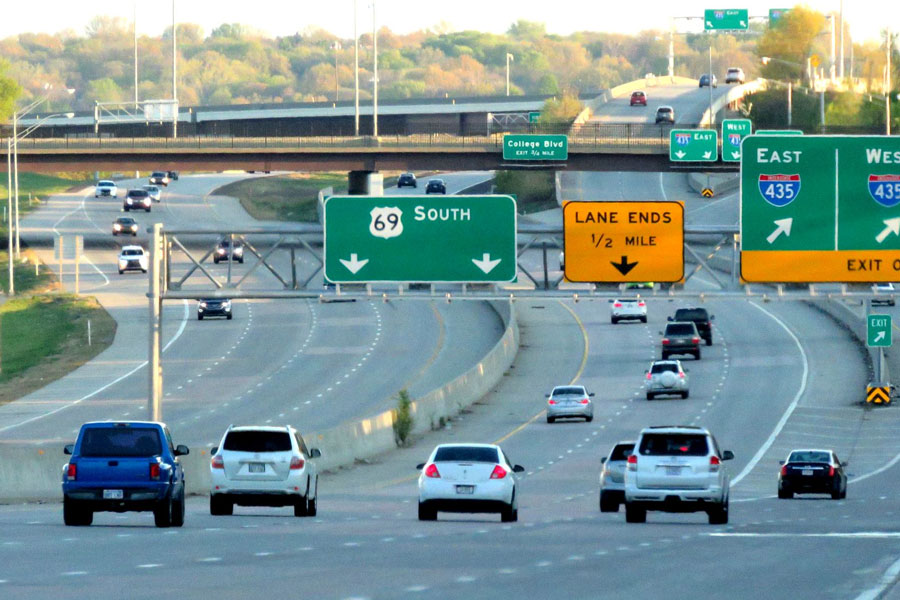 Why it matters: City leaders say expanding U.S. 69 is long overdue. The highway serves as a major artery for residents in Overland Park’s growing southern half. But it’s also increasingly congested, creating daily headaches for commuters.

The Kansas Department of Transportation lists U.S. 69 as the state’s busiest four-lane road with an estimated 80,000 vehicles passing through the corridor daily.

What happens next: The toll lane proposal must now be approved by the Kansas Turnpike Authority and State Finance Council, a group which includes the governor and legislative leaders.

If approved, work on constructing the toll lanes could begin as early as next year.

The details: The council on Monday voted 10-2 for a resolution that allows the city to enter a joint proposal partnership with KDOT to build one express toll lane in either direction between 103rd and 151st Street.

The plan also allows for additional expansion south to 179th Street if more state or federal funds are received.

Two free lanes going both north and south would remain.

Prices in the express toll lanes would vary based on the amount of traffic and time of day but could range anywhere from $0.50 to $1.75 per trip.

Who pays for it: Under the proposal, the city would contribute $20 million to the project’s overall cost, estimated to be about $300 million, with the city’s share set to be paid back through revenue generated by the tolls.

KDOT officials estimate the city’s contribution could be paid back in 15 to 20 years. After that, the city could decide whether to continue with express toll lanes or make all lanes free.

Opposition to tolls: Among councilmembers and residents, pretty much everyone agrees that congestion on U.S. 69 is a problem. But there is disagreement over how to pay for it.

Again on Monday, some residents voiced their opposition to toll lanes, arguing it would add another burden to middle-class taxpayers and create inequities between drivers who could afford to use toll lanes and those who couldn’t.

Councilmembers Scott Hamblin and Faris Farassati remained opposed to the toll lanes plan and voted against the resolution Monday.

Farassati called toll lanes “not socially equitable” and questioned the state’s projections for how many drivers would use the toll lanes.

“It’s a great deal for the state of Kansas, but it’s not a good deal for the people of Overland Park,” Farassati said.

Support for tolls plan: Still, the majority of councilmembers — backed by some businesses and the endorsement of the Overland Park Chamber of Commerce — said express toll lanes were the quickest and most cost effective way to ease congestion on U.S. 69.

“That is a very critical corridor for our city,” councilmember Paul Lyons said. “It’s a key to allowing the future growth of the southern part of our city.”

An alternative presented by KDOT to do a traditional expansion of U.S. 69 without toll lanes would take longer and potentially end up being more expensive, KDOT officials said.

“This [toll lanes plan] fixes the problem now, all at one time,” said Council President Curt Skoog. “The [city’s] $20 million match will be paid by those who choose to use the toll lanes, the majority of which will be non-Overland Park residents.”

What KDOT says: Expanding U.S. 69 is one of KDOT’s top priorities, but the agency’s funds have been dipped into for years in order to fill the state’s budget holes, delaying hundreds of millions of dollars in road work across Kansas.

KDOT has pitched cost-sharing partnerships like the express toll lanes plan proposed for U.S. 69 as a way to expedite long-delayed highway projects.

In a statement Tuesday, KDOT thanked the Overland Park City Council for approving the plan.

“The decision is a demonstration of the City’s commitment to maintaining Overland Park’s excellent quality of life by ensuring that the community continues to provide cost-effective, high-performing infrastructure, good access to jobs and an improved level of roadway safety,” KDOT’s statement said.

In a since-deleted tweet responding to a question about a potential contract extension for Kansas City Chiefs safety Tyrann Mathieu, Mathieu tweeted that he's "probably not" going to get a new deal in … END_OF_DOCUMENT_TOKEN_TO_BE_REPLACED

KANSAS CITY, Mo. — A manhole left uncovered is the source of concern after a woman damaged her car in Kansas City. The single-car crash happened at 11th Street and Tracy Avenue during the busy … END_OF_DOCUMENT_TOKEN_TO_BE_REPLACED

Kansas City, Missouri's COVID-19 emergency order was set to expire at the end of the month. But Mayor Quinton Lucas made it clear Friday that private businesses can still set their own rules.Any … END_OF_DOCUMENT_TOKEN_TO_BE_REPLACED

KANSAS CITY, MO (KCTV/AP) — All restrictions meant to slow the spread of the coronavirus were being rescinded as of midday Friday in Kansas City, Missouri, following guidance from the U.S. Centers for … END_OF_DOCUMENT_TOKEN_TO_BE_REPLACED